As you may recall, I did a through exploration of the former Farley Post Office and Daniel P. Moynihan Train Hall when it opened back in January. But I’ve recently discovered that I have missed out on a great Forgotten NY opportunity in that very post office, and I could kick myself for it.

I’ll backtrack a bit. I worked in the Penn Station area between 1988 and 1991, when I worked for a small typesetting and printing firm on West 29th Street, and also between 2000 and 2004, when I was a catalog copywriter at Macy’s. On my lunch hour at both places, I would occasionally rove far and wide; at Macy’s, I would take the subway downtown and uptown and even once or twice into Brooklyn.

But sometimes I would wander into the local post office, which was located in the lobby area fronting 8th Avenue in the Farley Post Office, which was then the main distribution point for mail in NYC. The only post office “retail” windows that were opened 24 hours a day where located here. Stories abounded on local news channels of people who waited till the last possible minute to get their tax bills mailed without risking a penalty — midnight on April 15 — doing it from the windows here at the Farley Post Office. 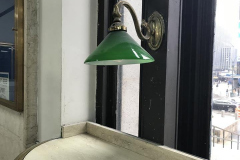 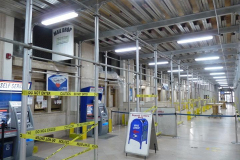 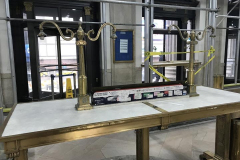 I never got photos of the postal windows. In the 1980s, I wasn’t photographing everything of interest in sight yet, and in the 2000s I was mindful that postal officials don’t like people shuffling around taking pictures; I;ve experienced this in other post offices. A shame, because many of the older ones have artwork and obscurities that make them very interesting. Here, the walls and floors are made of polished marble, and there are tables with brass fixtures with green shades.

Though the roof is now obscured by construction scaffolds, it’s an impressive sight, 40 feet high and displaying large brass medallions corresponding to the members of the international postal union, now under the jurisdiction of the United Nations at the time of the post office’s construction in the 1910s.

A brass-framed directory, a black and white push pin board with white letters, mounted near the 8th Avenue doors, is apparently kept up to date with the names of the officials still working for USPS in the building.

Near the 33rd Street entrance there is a dimly-lit corridor trailing off perpendicular to the “retail” post office windows.

There are apparently a number of now-disused windows with brass partitions. 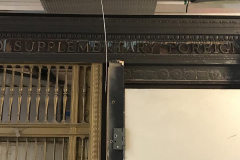 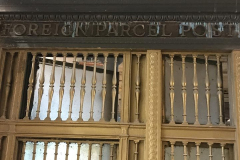 Some lettering above one of the brass windows identifies it as a foreign parcel post window. 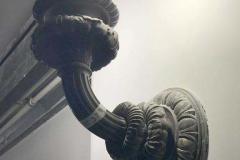 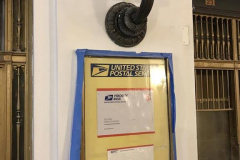 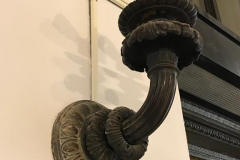 I was fascinated with the brass sconces, which were holding spiral LED lighbulbs, only some of which were turned on.

So what was this corridor all about? It’s the former location of one of the more obscure museums in the city, the Museum of Postal History.

“…there were things ranging from the original minutes for the proposal of City Hall to a bunch of mail inspection patches, advertisements for the Pony Post, a leather carrier mail pouch, and the lyrics to a song called the “Mail Man Blues.” Some things had fallen over, everything was covered in a sheen of dust, and all the glass was dirty. A vintage collection of international mail paraphernalia was arranged inside original service counters, the assortment of objects including photos of the original post office at City Hall (since demolished), 19th century telephones, whiskey bottles, wooden tubes for mailing liquids, vaseline glass mailboxes, metal crates from the 1920s for mailing eggs, wooden and leather postcards, and letters from prisoners of the world wars. There were 146-year-old envelopes from original mail delivered during the Civil War, canceled stamps dating back to the 1800s, as well as brass postcards.” Atlas Obscura

Both the Atlas Obscura and Untapped Cities links above have plenty of photos of the former museum’s offerings. Moreover, Scouting NY has photos of the interior of the Farley when it was still a PO; fascinating stuff. It all completely escaped me when I was working in the area!

In the corridor today there’s a locked door with a “museum” sign. I’m not sure what the plans are for this space. Are the artifacts behind the door? Will the PO Museum be relocated therein, or will they be restored to the corridor when construction is complete? The corridor is open to the public, as I was not stopped by hardhats or police who were walking around. Still, I kept the camera sheathed while they were around.

As you can see from some of the photos on the linked sites above, this pair of arched doorways used to dead end at the end of the corridor. Today, they open up onto…

… a balcony overlooking the main floor of the Moynihan Train Hall.

Will the Museum of Postal History ever reopen? If you have any information, the Comments floor is open.

Can you just ask the NY branch of the USPS?

I think the bulbs in those bronze elbow sconces are compact fluorescents (CFL’s), not LED’s. I would be surprised if there weren’t once glass covers on the sconces. It’s intriguing to wonder what form they might have taken. Winged helmet? Bas-relief globe with all the continents?

There had been globe shaped glass diffusers.

You’ve probably already seen this, but since it’s mail-related: https://www.microsoftnewskids.com/en-us/kids/science-tech/scientists-find-way-to-read-priceless-letters-sealed-300-years-ago-and-never-opened/ar-BB1ebFnk?ocid=msedgntp

the door was wide open to the museum when i passed by recently. it was all tore up in there. step ladders, wires hanging, etc.. hopefully the room is just being renovated and not closed down for some other use.

Good idea. Is this Seth Weine who lived with Jay Reisberg in the Village? John Lynch here. This is one of my favorite sites. I link to it on my website JohnJLynchAICP.com. If you are Jay’s friend please say Hi for me. I hope all is well with you.