So a new era begins with Forgotten New York today: this is really the first piece consisting of more than one image I am composing on my new computer, a desktop with the M1 chip (Apple had been using Intel chips for maybe two decades). So far, it’s really fast. Previously my machine had been an IMac purchased in December 2013 and I have retired it a few months short of its 8th birthday, though I’ll keep it around as a backup. It’s a sad state of affairs that desktop computers are old at age five and depreciate as soon as you take them out of the box (like cars as soon as you drive them off the lot home). I extended the machine’s life by replacing the hard drive a few years ago. I had been using a 2008 edition of Photoshop and old versions of internet browsers; WordPress, I did manage to keep current for the most part. There was a lot of waiting for the spinning pinwheel balls to stop so I could continue working, which I was truly tired of. I am using a 12 month payment plan at a reasonable rate.

I’m not a fan of the “Magic Keyboard” as they call it, since it manages to be supersensitive and miss keystrokes at the same time. I often have to retype a word or put in a missing character or take one out.

One of the new pieces of software I am using is a new version of Photoshop, which Adobe has changed completely since 2008; I have to learn its nuances which take up a good deal of time, and I’m a basics user anyway. Did you know that Photoshop has gotten so expensive that Adobe no longer sells it? They distribute it, but you need to use a monthly plan to rent it. Microsoft also does this for its Office suite of composing tools.

Today, I wanted to do my usual longform Sunday post without so many images, till I’m completely comfortable with things. I thought of a walk in Greenpoint and Williamsburg I did in December 2020 when I finished up by walking North 8th Street from Kent Avenue back to the L train entrance at Bedford and North 7th.

A pair of what look like relatively new buildings at #68 (left) and #70 North 8th. But wait! Only #70 is new. #68 is a stolid brick building going back several decades (as you can see by making Street View go back a few years). When #68’s new owners renovated the building for short term rentals, they brought in Los Angeles-based muralist Kelcey Fisher (KFISH) to give the building a distinctive appearance. 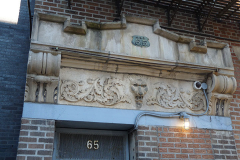 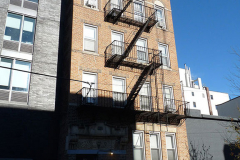 Across the street is #65 North 8th, which has pretty much been left alone over the years. You can see that photography is tough from November to February, with the harsh shadows; cloudy days are better. Here’s the front entrance, with the carved lion head guarding it.

But turn your attention to that medallion at the top, that verdigris has made green. Above the numeral can be seen the initials M.K.Z. This completely stumps me, unless those are the initials of the original developer. 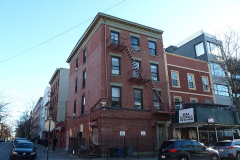 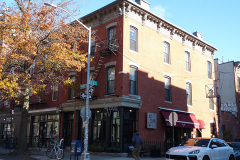 A pair of brick buildings on the corner of Wythe Avenue and North 8th. The one on the NE corner is home to Fat Goose, which “puts a creative twist on American food, using local and seasonal ingredients.” It had been here since 2011 but is apparently a victim of the pandemic, which has visited calamity on NYC eateries. 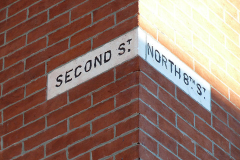 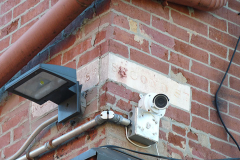 But there is something unusual about the buildings; both have a pair of street signs, which was the usual method of identifying streets before signs were attached to lampposts or telephone poles. You can see the buildings were constructed before 1890 or so because they identify Wythe Avenue as “Second Street.” When the area was laid out in the early to mid-1800s, it had two sets of intersecting numbered streets, the North and South streets still in use today; however, Kent Avenue through Hewes Street were numbered 1 through 12. After awhile this state of affairs was judged rather confusing (1st and North 1st, etc) that the north-south streets were given actual names: Kent, Wythe, Berry, Bedford etc.)

Recently FNY mentioned a “former firehouse” that commenters agreed was never one, but here’s the real McCoy, Engine 212 at #134 Wythe between North 8th and 9th. The city finally got its wish and closed down the firehouse (which has been abandoned for some time now), but back in 1975 the city originally planned to close it under the Abe Beame administration as it had to make budget adjustments that cut to the flesh as it almost went bankrupt and at first, got no relief from the federal government (remember the Daily News headline, “Ford to City: Drop Dead”?) The neighborhood, then firmly middle class, rallied around the firehouse, staying execution for a few decades.

Currently the Firehouse North Brooklyn Community Center is attempting to revive the building, but things looked moribund during Covid Winter #1.

As FNY readers and tourgoers know I like the look of brick buildings with plenty of windows, which were most often factories when built. #128 Wythe, next to the firehouse, is one of these and I’d get an apartment here if I could cough up the $3950 for a one bedroom this listing reports. Remember, I said Williamsburg used to be a middle-class neighborhood.

I’m unsure if the terms are used anymore but the “north” numbered streets of Williamsburg, north of Grand Street, used to be called the “Northside.” This very faded sign was placed there in the 1970s or 1980s, when the term was still common. Perhaps it still is?

Returning to North 8th, here’s a stark contrast in residential building styles of 1880-1910 and 2021 (as epitomized by #104, with its incredibly large first floor window; the owners better keep their decency when in that room, no?

At first I was perplexed by this building at #101 North 8th, named Fellow with a very wide front door. I had suspected a stable but the Street View time machine reveals simply a garage with a metal door. As far as its nature in 2021 the barber pole on the right gave it away. I have noticed that tonsorial establishments are very big in areas loosely defined as “hipster” which Williamsburg had been for about a decade before the wealthy invaded and conquered. (Me, I just tell the barber down the block, make what I have neater.)

The building is also home to a bake shop and espresso bar called Butler. The sanitary logistics of a barber shop and eating establishment would seemingly cancel the possibility of combining the two under the same roof. However, ownerships don’t see the incongruity of the situation and this sort of combo is seen more often than you’d think. I’ve seen it in Clinton Hill and the East Village. I suspect that here on North 8th, the oat milk and the hair oil is separated by a wall. I didn’t go in, as I had a need for neither. 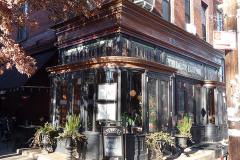 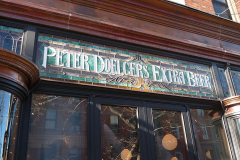 At the corner of Berry Street and North 8th is the longtime establishment Teddy’s and its incredible stained glass window. I keep meaning to go in, which I haven’t done for nearly 30 years. FNY gives it the extended treatment in this post from June 2021.

Catercorner to Teddy’s is George and Jack’s Tap Room (formerly the Brooklyn Ale House) at #103 Berry Street, which boasts some original stained glass of its own.

When a place tells you what it is, believe it. At first I thought Egg Shop, at #138 North 8th, was a euphemism, but it’s a restaurant where they make egg dishes. The branch in NoLita, Manhattan, opened a few years before this one did.

Anyone know who invented the phrase “power to the people” as on this mural at North 8th and Bedford? A song with the title was a hit for John Lennon in his revolutionary period in 1971-72 (“Imagine” is from the same batch of songs). 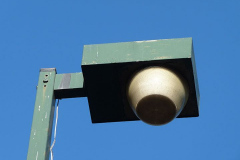 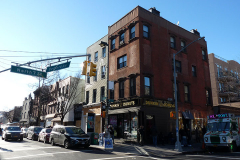 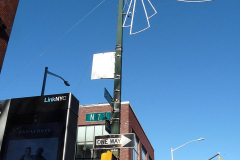 Bedford and North 7th is the commercial nexus of Williamsburg, or at least has been since 1995 or so when it began to have a population influx. But for me, the intersection is notable for Bedford’s only remaining “shoebox” lamppost. I have scoured the internet but don’t know the manufacturer; I just call them “shoeboxes” because of the boxy housing of the lamp fixture, which shines sodium yellow. Its days have to be numbered in the age of LED, as indeed the remainder of posts in the immediate area have the new white light-emitting diodes.

The “shoeboxes” date to the 1970s. I remember them on Brooklyn’s 5th Avenue in Park Slope and also Manhattan’s 5th Avenue below Madison Square. You can still find some on Church Avenue in East Flatbush and on Utica Avenue in Bedford-Stuyvesant. But they’re getting rare. 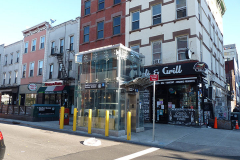 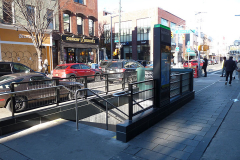 For years it perplexed me that the Bedford Avenue stop on the L train hadn’t received the deluxe makeover treatment. Occasionally, it’s one of the busiest in the system especially during summer tourist seasons in healthier times. That changed recently when the MTA undertook a 2-year rehabilitation program that coincided with cleaning up the L train East River tunnels. Bedford Avenue received new wall tiling, new staircase entrances and a new elevator.

That’s all I have today. Like I said, I’m feeling out the new tech and I have long wanted to reduce the hours I spend on the Sunday page, in any case.

Power to the People was a very common slogan at anti-war and b
lack power rallies in the mid to late sixties. It was everywhere back then ]

I think I’ve spotted a little bit of a mystery regarding the street markers on #127 Wythe Avenue. If you look at the ca. 1940 Municipal Archives tax lot photo ( 127 Wythe Avenue ca. 1940 those markers do not seem to be embedded in the brickwork. Rather, there is a pair of enameled metal markers higher up on the brick walls, similar to those that can be seen on #146 Wythe Avenue, which happens to be catty-corner to #127. There’s been some alterations/renovations to the brick walls on #127 and I’m wondering if the street markers that are there now were installed during or after the renovations where performed on the exterior walls. Markers possibly salvaged from a couple of other buildings (one on Wythe; another on North 8th) that had been razed or remodeled.

Apologies. Looks like the html tag to the Archives link needs an adjustment: 125 Wythe Avenue ca. 1940

will look at this later, at work currently

The Bedford Avenue stop on the 14th St line is “one of the busiest in the system especially during summer tourist seasons in healthier times.”? You ain’t lyin’. A lot of people come to Smorgasburg, held on Saturday afternoons in the park at N.7th .and Kent, and the train is rather crowded leaving Manhattan, with a good half of the passengers disembarking at that stop, probably at least half of those heading for the waterfront.

Teddy’s !! When I moved to W-burg in 1991, Teddy’s was the only bar in the neighborhood that you’d actually want to hang out in. Glad it’s still there.
And congrats on your new computer set-up.