I just keep finding more and more artifacts at the High Street IND subway station serving A and C trains. One of the artifacts is the name of the station itself. Today, High Street exists as a one-block stub between Pearl and Jay Streets, but in its original layout it ran east from Fulton Street between Cranberry and Middagh Streets all the way east to Navy Street at the Brooklyn Navy HYard. Decades of new construction, including the grassy Cadman Plaza, the Brooklyn-Queens Expressway and the Farragut Houses, obliterated most of it as well as some other streets entirely.

This 1949 Hagstrom map was made just at the outset of the new construction that would destroy much of downtown Brooklyn in favor of expressways and housing projects (thanks Robert Moses!) Cadman Plaza is in place, but not yet the Houses, and most of the (occasionally tiny) streets were still intact. The circle in Cadman Plaza stands for the High Street station, and High Street itself was still in place.

Speaking of the Navy Yard, a painted sign can be found at the Adams Street exit of the High Street station. I have been here plenty of times before, but either must have missed this, or it had been previously covered. The sign implies that there may at one time have been a shuttle bus from here to the Navy Yard, which before its closure in 1966, employed thousands in its shipyards, especially during the WWII years. However, the sign may also have pointed people toward the B57 bus, which until recently terminated at High and Pearl Streets and then traveled down Flushing Avenue past the Navy Yard toward Maspeth. These days, the B57 runs all the way south to Red Hook.

A companion painted sign points to the Red Cross Building. The Brooklyn HQ of the Red Cross, the humanitarian organization that provides emergency assistance, disaster relief, and disaster preparedness education in the United States, was formerly on High Street east of Washington Street. That building is long gone and the NYC Red Cross HQ is currently at 520 West 49th Street in Hell’s Kitchen. 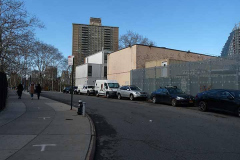 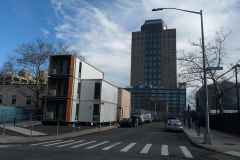 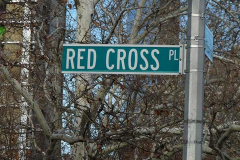 But the painted sign is not the only Red Cross ghost. When Cadman Plaza was built and Adams Street given multiple lanes and turned into “Brooklyn Bridge Boulevard” there was a leftover stub of High Street between Washington, now Cadman Plaza East, and Adams. The stub was renamed Red Cross Place for the building, which is now gone but the street name remains.

Red Cross Place isn’t the only street stub found here. This dead end Sands Street leads into an emergency vehicle parking lot. Sands Street picks up again and runs through the Farragut Houses into the Navy Yard. Once the province of taverns, brothels and tattoo joints catering to Navy Yard sailors, it’s been tamed considerably from decades ago. 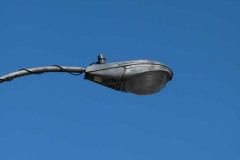 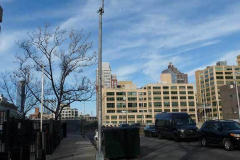 One more relic, this one a lamp fixture from the 1970s, a General Electric M400A2, a second-generation GEM400 that had a yellow sodium bulb and the photocell mounted toward the back of the fixture. This was an “evolved” version of the GE M400, which was equipped with green-white mercury bulbs. Both versions of the GE M400 dominated main streets in NYC from 1960-1975, but today, they’re hard to spot in the 5 boroughs, though still plentiful elsewhere.

I passed through this station in June & October, saw the handpainted signs, and thought for sure you must have posted about them long before I saw them. There was also a great “Adams St” mosaic in there.
Thanks as always for what you do.

The painted sign that says “Navy Yard Buses” refers to three NYCTA routes that travelled from High Street IND Station northeasterly along Flushing Avenue past the Navy Yard site. There’s quite a bit of hidden history related to that simple, three-word sign. The sign refers to three routes – the B57 Flushing Ave. and B69 Vanderbilt Ave. (still running), plus the old B62 Graham Avenue line. The latter was re-routed, about 20 years ago, on Tompkins and Throop Avenues south of Flushing Avenue and thus no longer connects High Street IND with the old Navy Yard. It was also renumbered B43 as well.

All three routes were originally part of an armada of Brooklyn streetcars that crossed the Brooklyn Bridge to Park Row in Manhattan. The B57 and B62 were converted to trolley buses in 1948, which ran until 1960. The Brooklyn Bridge streetcar tracks were removed in 1950, and the B69 became a conventional bus route in 1951. To accommodate the former bridge streetcar riders, a free transfer was established at High Street between the A train and the three bus routes noted above. Passengers leaving Manhattan who wished to ride the B57, B62, or B69 had to obtain a transfer ticket at the A train Broadway-Nassau station (Fulton St. today), which in turn was given to the bus operator upon boarding. Leaving the Navy Yard going into Manhattan, the bus operator issued a transfer ticket to alighting passengers at High Street, who used it to enter the subway. The ticket stated, “Good to Broadway-Nassau Station only” but in reality, one could stay on the subway to any destination. Returning to Brooklyn, though, the only way to get a free bus transfer was to board the A at Broadway-Nassau and request the transfer ticket when buying a token at a specific booth there.

A similar bus-subway transfer was also in place at High Street for the B67 and B75 routes, which also were originally Brooklyn Bridge streetcars. The High Street free transfers were eliminated at some point in the late 1980s-early 1990s (not sure); Metrocard free transfers made the issue moot after 1997.

Unrelated: the old Red Cross building is now the headquarters of the NYC Emergency Management office.

The old Red Cross Building was torn down; the NYC Emergency Management Building is an entirely new structure, fronting on a park which was previously storage for construction equipment.

One more historical factoid, if I may. The 1949 Hagstrom shows (correctly) a BMT elevated line ending at Myrtle Ave amd Jay St. Originally, the Myrtle and a number of other old Brooklyn els continued over the Brooklyn Bridge to a terminal at Park Row, Manhattan (same terminal building the streetcars used). After 1940 only the Myrtle and Lexington Ave. elevateds were left on the bridge. In 1944 the bridge el tracks were eliminated, and the Myrtle and Lexington lines were cut back to Jay Street. Manhattan el passengers were given free transfers to the streetcars, which were shifted to the old el tracks in order to provide two motor traffic lanes each way. As noted in my first posting the streetcars stopped in 1950, creating the bus transfers. The Lexington Ave. elevated stopped in 1950 as well; the Myrtle line remained until 1969 when it was razed south of Broadway (structure actually ends at Lewis Avenue). M trains continue to run north of Broadway to Metropolitan Avenue in Queens. From 1944 until 1969, Myrtle El passengers boarding at Sumner Avenue to Navy Street inclusive could use free paper transfers to board A trains at Jay Street, with the same “Broadway-Nassau” only provision afforded the bus riders. For many years afterward, the B54 Myrtle Avenue bus provided the same free connection at Jay Street.

That trackless remnant of the Myrtle Avenue El structure from Lewis to Metropolitan survived the line’s closing because it supported electrical cables from a power substation. It no longer serves that purpose but remains as an interesting relic of a line that would otherwise be fading into history.

The trackless part of the Myrtle El only goes as far as just east of Bushwick Ave, not all the way to Metropolitan.

A minor correction: the Brooklyn Red Cross building is still there, but looks dramatically different. In 2004-05 the building was stripped down to the slabs and columns and renovated into the headquarters of the NYC Office of Emergency Management.

When the Federal government installed barricades at either end of Cadman Plaza East about 5 years ago, they uncovered a paved over vault at the corner of Red Cross Place and CPE that used to be part of another entrance to the High St station.

That station is pretty deep. Is there any remnant of the entrance inside the station?

I work in the Navy Yard, and I use this station. There are now, and have been for several years, shuttle buses to the Yard that depart from a spot near the station. The sign points in the right way for the bus. It is still (or once again) useful.