WHAT a difference 6 years make. In March 2015 I was picking my way through Tribeca at the end of a considerably cold winter, by far the coldest in recent experience, and checked out a one-block alley, Franklin Place. Periodically, I like to see if its uneven flagstones are still there and haven’t been paved over. In 2015, I found the alley pretty much the same as it was when I first inspected it during initial photography for Forgotten New York. But as we will see, changes have been made.

Repeating some history from the first Franklin Place post: Franklin Street, and the Place named for it, have been there a long time. This Dripps atlas from about 1867 shows it already in place, and every street on this excerpt also remains in place. Before the street was named for the Philadelphia polymath who proved the usability of electricity, stove inventor, editor, political activist and ambassador to France, it was, mystifyingly called Sugarloaf, or Sugar Loaf, Street. The name likely had to do with Sugar Loaf, both a town and a mountain in Orange County, New York. According to legend, in winter the mountain resembled “sugar loaves” sold before cubes or granulated sugar became the norm.

Facing south on Franklin Place. The dirt, mud and general shabbiness of Franklin Place in days past has been mitigated somewhat and the Belgian blocks have been retained, but they do seem to have been polished. 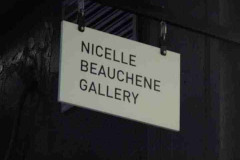 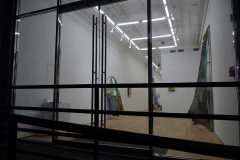 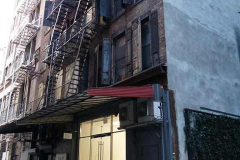 There are now three numbered addresses on Franklin Place. #7 is the Nicelle Beauchene Gallery, which exhibits art that I am too thick, plebeian and lumpenprole to really “get.” In January 2022, pieces by Lucy Puls, called collectively “Offline Perception,” were on offer.

Every block, no matter how small, needs a skyscraper in 2022 apparently, and on Franklin Place we have #5 Franklin Place, which Curbed says topped out in 2014 and opened in 2015. Strangely I did not notice it during my 2015 visit here. The art in the front seems to be several stacked gold crowns.

In front of #5 Franklin Place we have a remaining stretch of those uneven curbstones I’m always checking. These are unlike the heavier Belgian Blocks also found on Franklin Place and may be considerably older.

Since I was here last, TKT Taekwondo has taken over #9 Franklin Place.

Buildings facing obscure alleys in Manhattan often have wood shutters that have been there perhaps for over a century. I have noticed them too on Jersey Street in NoHo and on Marketfield Street in the financial district.

Though there are no guards or gates this sign identifies Franklin Place as a private street, though I found a number of cars parked on it as I always have.

The considerably-cleaned up meeting of Franklin Place and White Street. Even though there are at least two businesses and an apartment building facing Franklin Place, I’m surprised the Department of Transportation hasn’t installed a couple of streetlamps.

Some interesting tidbits about Franklin Place here. Apparently it has been in existence since 1809 and was called Scott’s Alley until 1850 or roundabouts.

I was through there one evening a few years back when the rat terrier club strolled in for their monthly blood-lust party.

Chances are the private street designation means that while parking is prohibited it’s okay to walk on the street. Otherwise the signage would be more explicit, and in any event there are two public businesses, the gallery and the taekwondo school, located on it.

Just a nit. Those shutters look more like sheet steel to me.

Private Street,yeah right.That sign is most likely illegal.
See what happens when people have too much money
and therefore feel entitled?Reminds me of you know who

No, I don’t know who. Could it possibly be “the big guy” who gets 10% of the “tributes” paid by foreign leaders (& who also owns three homes in the same very small state)? Pretty good for a guy who never had a real job.
“Let’s go, Brandon!”

Could easily pass for a street in Merry Olde London. NBC’s “New Amsterdam” has some scenes set in London recently, and they’ve been filming in what looks like Brooklyn Heights or thereabouts. They’ve done an admirable job of making Brooklyn look like London, even going so far as to change out streets signs (or at least cover them up) and park a double-decker bus to block the NYC street views.

Sugar Loaf Street was the former name of Franklin Street. Sugar Loaf Street was extended east to Broadway in 1816 and its name changed to Franklin Street, in honor of Benjamin Franklin.
Up to 1846, Franklin Place was called Scott’s Alley. After 1846, it was renamed Franklin Place. You can find this information in “Old New York: A Journal Relating to the History and Antiquities
of New York City”, Vol. II pp. 113, 115, 117 & 119.

Interesting article about Franklin Place in the Tribeca Citizen (2/21/17)
https://tribecacitizen.com/2017/02/21/nosy-neighbor-is-franklin-place-really-a-private-street/

Please, no politics in FNY. (except for the obligatory cursing of Robert Moses’ memory)

… so no one is going to mention the CBS Murders from 1982? One of the victims was unfortunately dumped here. I mean, it’s unpleasant but facts are facts!