THIS post is primarily for out of towners because if you live and work in midtown Manhattan, you’re likely aware of Turnstyle, the mini-mall in the incredibly huge connecting corridor between exits of the express IND section of the Columbus Circle station (constructed in the 1930s), which also connects with the local IRT Columbus Circle stop, one of the city’s original 28 stations opened in 1904.

A hallmark of the IND is that the stations are incredibly cavernous, with large underground passageways connecting exits that are often a complete block from each other. I had been in the IND portion of Columbus Circle only a few times and recall a barber shop, some retail and not much else (the IND 8th Avenue 42nd Street station is similar).

For 9 months in 2019, I worked at a small design firm in the MONY MONY Building, #1740 Broadway and thus Columbus Circle was my stop. I was flabbergasted to see what they had done with the corridor, with eateries and shops on each side of the corridor with some more shops and seating in between. Turnstyle had actually opened in 2016 but I only became aware of it three years later.

Seen here is the pizza franchise, Champion, where I went for lunch once per week. Most often I would get tacos at a Mexican place opposite. Both have since left Turnstyle.

What fascinates me about Turnstyle was that it makes no attempt to cover up its subway pedigree. The columns and rivets are not disguised in any way. 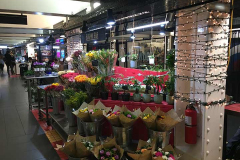 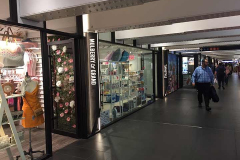 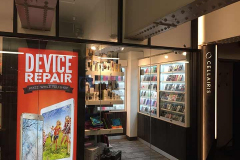 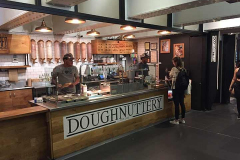 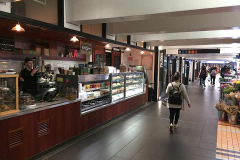 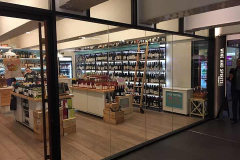 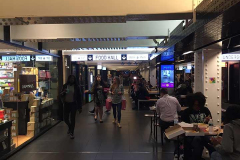 In addition to the restaurants there are several retail places, offering computer/watch repair and flowers.

On the south end of the corridor was the bar Merchant’s Gate.

Central Park masterminds Frederick Olmsted and Calvert Vaux whimsically named several main park exterior openings as ‘gates’ when the park was being built in the 1860s. Running clockwise around the park from Columbus Circle they are:

Strictly speaking, there are no metal gates that open and close — these should be called entrances — but Central Park does close at 1 AM and NYPD patrols shoo everyone they can locate out at that hour.

The sign, though, was inspired by the tiled signs you find in older subway stations.

This was 2019…and most of the shops you see here aren’t there anymore, as the Pandemic in 2020 forced many to close. The current roster can be found here.

KINGS BRIDGE PLAQUE, Then and Now

How do they keep out all the rats? I wouldn’t eat there!

I’m familiar with this mezzanine because I used the 59th Street IND station from Feb., 1967 until June, 1970 on a daily basis while attending Haaren HS at 58th & 10th Avenue

I’ll always love the MONY building because of that scene in
Midnight Cowboy.

I was working in the area when Turnstyles opened. I was impressed with the let’s say creativity of the concept. But the idea of eating in a subways station — noise, crowd, smell, discomfort — was a turn off.

Had my hair cut at the barbershop in this concourse many a time while attending nearby John Jay College in the late 1990s. So much has changed in the past 20 years, and most of it not for the better.

I like the subway style mosaic of Merchants’ Cafe.