What in the world could the Long Island Rail Road possibly have to do with the King Of Rock & Roll? Elvis Presley almost always traveled to concerts by plane, and if not a plane, by pink Cadillac. 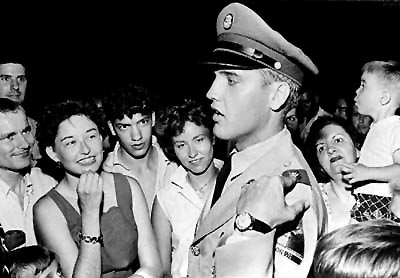 Actually, one of the few times Elvis took a train, or visited New York, was one of the more celebrated incidents in his life: his induction into the Army in 1958. ABOVE: While on his first furlough, Elvis Presley explains the insignia on his uniform to fans at the gates of Graceland Sunday evening June 1, 1958.

In September 1958, Elvis took a troop train from Memphis to the Brooklyn Army Terminal in Sunset Park. His likely route from Memphis to Brooklyn involved traveling from Penn Station to Jamaica, where he took a train along the Bay Ridge Branch from its junction with the LIRR Main Line in Glendale to the end of the line in Bay Ridge. 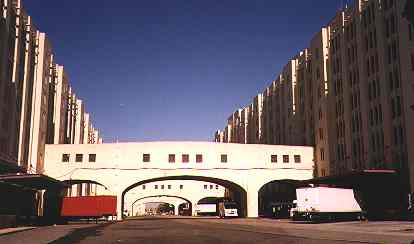 The Brooklyn Army Terminal is in Sunset Park, Brooklyn between the LIRR Bay Ridge Branch and 58th Street and between 2nd Avenue and the Narrows. 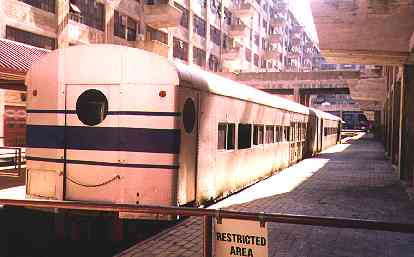 I was not aware until recently that a spur of the LIRR Bay Ridge Branch goes right into the Brooklyn Army Terminal. On a recent visit to the terminal, I discovered that an old LIRR diesel car is still sitting on the platform! This scene must be close to the one Elvis saw upon de-training in Brooklyn on the way to the dock where he and other inductees would ship out to Germany, where Elvis spent most of his Army career for the next two years.

2012: Nick Carr of Scouting NY got some excellent shots of Brooklyn Army Terminal Building B, where the railroad station is. The cars are LIRR P72 coaches. 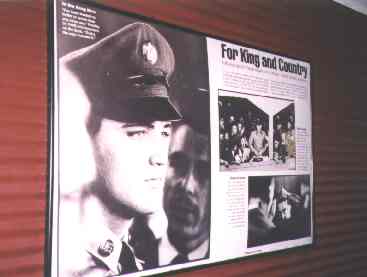 The Brooklyn Army Terminal maintains an exhibit in the front lobby commemorating Elvis’ arrival in Brooklyn. Elvis gave only one formal concert in New York, at Madison Square Garden June 9-11 1972, though he had done live appearances from television studios in the City, and recorded tracks at RCA Studios, then on East 24th, in 1956. “Hound Dog” and Don’t Be Cruel,” the only 2-sided #1 hit in rock history, were recorded there. He had visited the Apollo Theatre in Harlem in 1955, and was photographed in casual settings in NYC by photographer Al Wertheimer in June of ’56 that were collected in his “Elvis at 21” book. On January 4, 1957, Elvis made his third appearance on the Ed Sullivan Show from what is now the Ed Sullivan Theater, the present home of the David Letterman show, on Broadway. That was the show in which he was filmed from the waist up when singing “Don’t Be Cruel.” 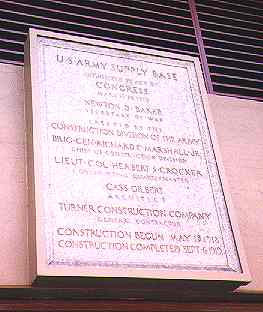 The Brooklyn Army Terminal, once a huge part of Brooklyn’s maritime manufacturing scene, was completed by famed architect Cass Gilbert in 1918. The waterfront is less active now, but BAT is still a bustling, imposing complex. 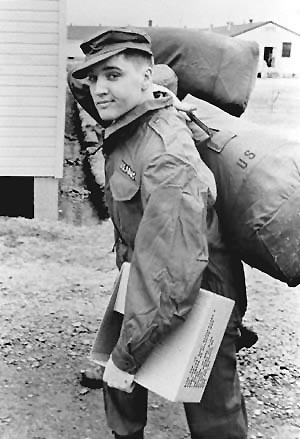 Elvis Presley was outfitted with all of his military gear at Ft Chaffee, Ark. Elvis was inducted March 24, 1958 at Memphis and spent several days at Ft. Chaffee before moving on to Ft. Hood Texas on the 28th, where he would undergo six months training. He would return to his hometown March 7, 1960 after completing his tour of duty.  (By Robert Williams / The Commercial Appeal)

From a tour of the B.A.T. on October, we learned that the interior platform was used for freight and not passengers. The LIRR cars there are for display purposes only. In reality the troop trains came off the Bay Ridge branch (the spur is still there) and went directly to the pier so that the troops would march directly from the train car to the ship without touching land.

Elvis’s trip was different and he held two press conferences before boarding the ship to Europe. Don’t know where the conferences were held so I don’t know if he was actually in that B.A.T building.

Great article about Elvis.
I thought before it was only one appearance of Elvis in NYC. But now i know it is several.
Viva Elvis!

This website had a lot of information about the rail operations at the Brooklyn Army Terminal, including a link to its more somber role in returning war dead from Europe after the War:
http://members.trainweb.com/bedt/milrr/bat.html

TY for info on that site. I grew up a few blocks away from BAT and walked past it many times going to Owls head park. The pics brought back some memories.