The Sunnyside Yards is a truly magnificent place…if you’re a railroad fan…an aficionado of the New York skyline…or a follower of ancient NYC street names, because the thousands of the fomer two and the dozens of the latter can all find something of interest here!

The Yards were carved out of sparsely-populated farmland, along with territory occupied by the British during the Revolution, between 1902, when the Long Island Road first began to buy up property here, and 1910, when the Yards opened in conjunction with the magnificent Pennsylvania Station on 7th Avenue. 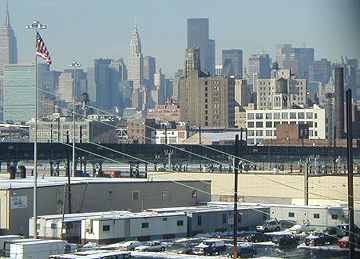 The Honeywell Street Bridge, built in 1910, stretches across Sunnyside Yards with midtown Manhattan its backdrop 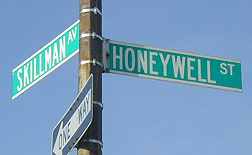 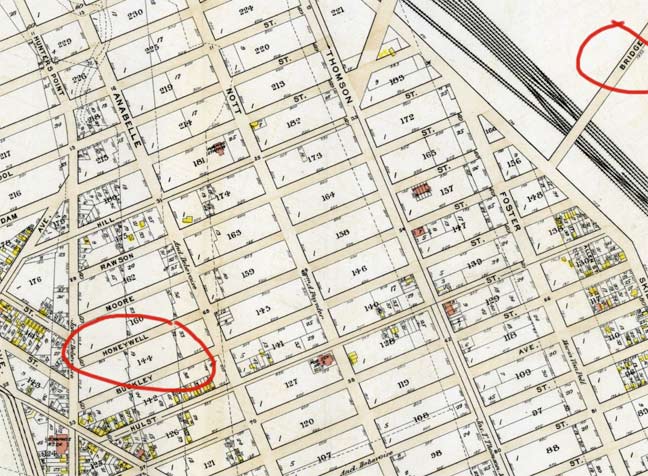 When streets were cut through Sunnyside in the early 20th Century they assumed the names of local landowners. Honeywell Street, which is now known as 35th Street south of Skillman, was just another of these side streets.

The Bridges of Sunnyside Yards

When the Yards were built, Long Island City, to the north of the Yards, was effectively cut off from Sunnyside and Maspeth, to the south. Viaducts were built at Queens Boulevard (which was itself under construction in 1910), Honeywell Street, Harold Avenue, and Thomson Avenue. Laurel Hill Avenue (43rd Street) Gosman Avenue (48th Street) and Woodside Avenue were carried under the railroad.

Through the years, these ancient iron viaducts have pretty much been allowed to stand without much maintenance, repair or painting, and it’s testimony to their original engineering that they survived as long as they did– in most cases, over ninety years. The Thomson viaduct was the first to be rebuilt, in the 1980s.

Time does take its toll, and in 2002, the Queens Boulevard bridge roadbed is being replaced in a complicated operation that retains its elevated train trestle, while the Honeywell Street bridge, in service since 1910 but out of action for most of the last two decades because it was, in effect, crumbling, was being torn down and replaced, but not without a proper Forgotten NY sendoff. 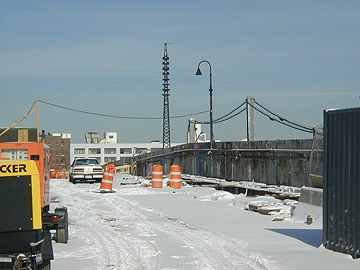 It never received high-intensity street lighting…it was illuminated simply by dim incandescent lamps housed in 1910s vintage Bishop Crook lights, which gradually lost their scrollwork and glass diffusers over the years, and finally, were allowed to burn out when the bridge was closed.

As I wrote this on 3/30/02, this section had already been razed, with the rest of the bridge to quickly follow. 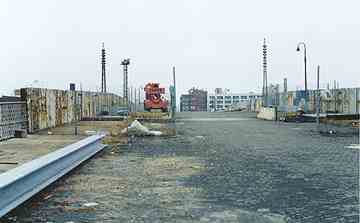 With some exceptions, the bridge had been closed to vehicular and pedestrian traffic since the early 1980s. The roadbed was still bricked (it never received the blacktop other NYC streets and bridges had) and was warping and buckling in several areas. 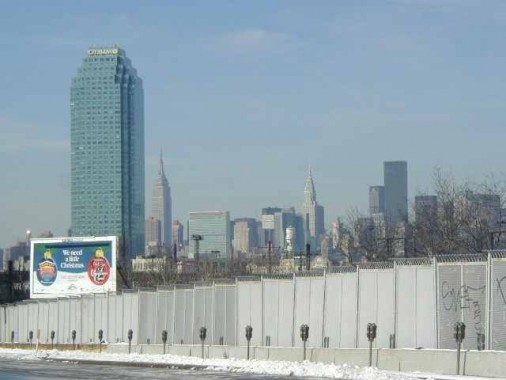 Manhattan, as seen from Skillman Avenue and Honeywell Street. Sunnyside Yards offers a spectacular, unimpeded view of the city. Here, the Citicorp Tower, the tallest building on Long Island, can be seen with the Empire State Building, the UN Secretariat Building, the Chrysler Building, and the Trump residential monolith on 1st Avenue. 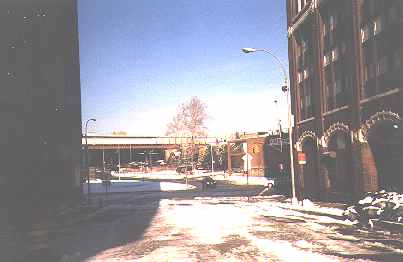 Honeywell Street ain’t all bridge. Here, a small piece of it joins Northern Boulevard. It’s still got Belgian blocks for paving. The BMT Astoria El can be seen in the background as it makes its way up 31st Street. 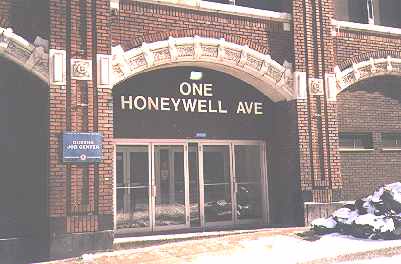 An unemployment center, with other offices, is Honeywell Street’s only address. And they got it wrong! 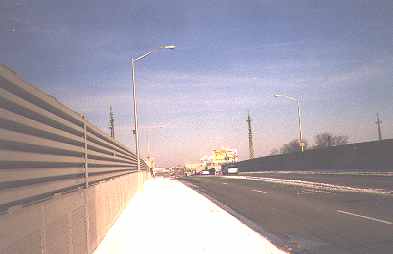 In the early 1990s, the Harold Avenue (39th Street) bridge, in many ways a carbon copy of the Honeywell Viaduct down to its bishop crook posts, was similarly torn down, and replaced with this new streamlined, and utterly characterless, modern viaduct; the new Honeywell bridge was built closely along these lines. Note the guardrail doesn’t permit much sightseeing into the Sunnyside Yards. 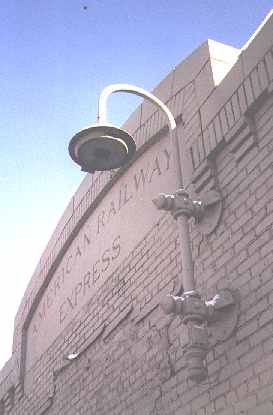 And yet…the new Harold Avenue viaduct does have a vestige of the past. American Railway Express, a precursor to Federal Express, had offices in the Sunnyside Yards and a brick entrance on the bridge. As an added fillip, here is one of only two remaining examples of the wall-bracketed version of the bishop crook lamppost remaining in New York City (it has lost its decorative scrollwork, and even its 1980s era sodium lamp has burned out).

Update: in the runup to East Side Access, this building and its lamp have been removed.