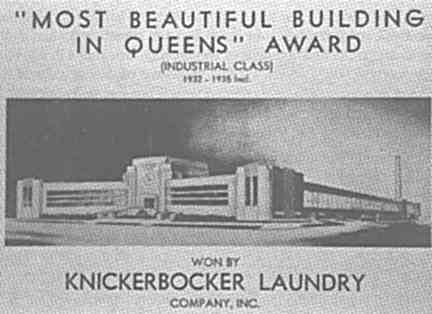 Only in the ‘dirty 30s’ (as weatherman Tex Antoine used to say) could a laundry be named the most beautiful building in Queens…though in the borough of Archie Bunker, maybe that isn’t such an anomaly after all.

Your webmaster has been riding the Long Island Railroad for nearly a decade now, and on each trip on the north side of the tracks, you could always see the Knickerbocker Laundry. The 1936 building was an exaggerated streamline design, a side category of Art Deco called Streamline Moderne. (Other examples are the Triborough Bridge approaches and the set design of 1936 H.G. Wells adaptation, Things To Come.)

Curvilinear lines, perfectly symmetrical design, and a huge clock above the front entrance earned the “Beautiful Building” accolade from the Queens Chamber of Commerce soon after its opening. It was quite modernistic for its time and its design would be echoed in the futuristic buildings featured in the 1939-40 World’s Fair in Flushing Meadows.

The Knickerbocker Laundry, and later, Naarden Fragrances, occupied the structure until 1986 when it began a slow slide into utter oblivion and disrepair, which is how your webmaster encountered it in 1993. But just a couple of years later, there was a renaissance… 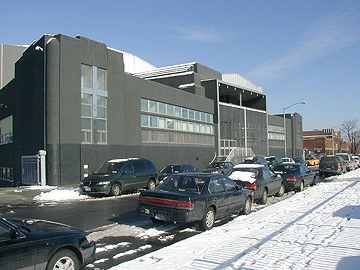 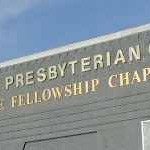 The New York Presbyterian Church, with a primarily Korean congregation, purchased the building, and as you can see, renovated it from stem to stern. Very few of its original Streamline Moderne Le Corbusier-ish touches remain.

In any case it’s a lot better than the shape it was in just a few years ago! 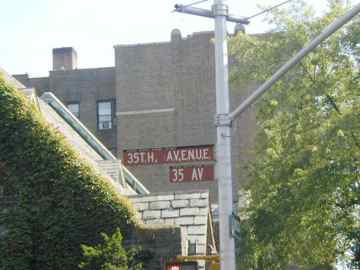 It seems to be the height of redundancy and a complete waste to post TWO maroon landmark street signs at one corner in Jackson Heights. What’s the Department of Transportation up to?

And what the heck are the little numbers after each letter in the sign? This calls for a bit of sleuthing.

It’s all because of Alfred Butts, the inventor of a popular board game. As the website ideafinder.com told it…

Butts, attempting to create a game that would use both chance and skill, combined features of anagrams and the crossword puzzle-and called his new game “Criss Cross Words.”

The game was strictly a home entertainment for his family and friends. Many of the friends to whom Butts supplied handmade sample But the established game manufacturers to whom he submitted his invention were unanimous in rejecting it for commercial development. Butts, again busy as an architect, put aside his efforts to develop the game.

In 1948, Mr. and Mrs. James Brunot, owners of one of the original Criss Cross Words sets, thought the game should be marketed. Butts authorized the Brunots to manufacture the game. Mr. and Mrs. Brunotformed the Production and Marketing Company setting up shop in their Newtown, Connecticut, home. The Brunots rented a little abandoned schoolhouse in Dodgingtown, Connecticut, where with friends they turned out 12 games an hour, stamping letters on wooden tiles one at a time. Later, boards, boxes and tiles were made elsewhere and sent to the factory for assembly and shipping.

The first four years were a struggle. Mr. Brunot kept his regular job. In 1949, the Brunots made 2,400 sets and lost $450. However, year by year, the orders increased as news about the game spread, mainly by word of mouth. Then, in 1952, the Brunots left for a trip to Kentucky, returning to find their little factory deluged with orders. Obviously, the game was no fad. Sales have gone steadily upwards, and today SCRABBLE® Brand Crossword Game is one of the leading board games in America, and by far the most popular word game. Today, Scrabble ranks (just below Monopoly) as the second best-selling game in U. S. history.

Alfred Butts was a Jackson Heights resident, and the Department of Transportation, in an unusually playful move for the usually-dour agency, assigned numerical values to the letters in 35th AVENUE matching the values they are assigned on Scrabble tiles. Only the H and V are worth much, at 4 points; the other letters are worth one each.

Your webmaster ALWAYS wins at Scrabble except if there’s money on the table.

The special sign is back on 35th and 82nd after a few years’ hiatus. 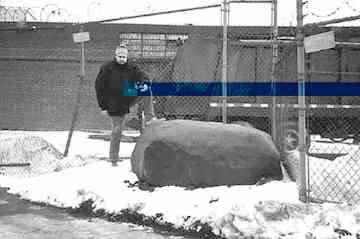 The boundary line between Brooklyn and Queens has been zigzagging back and forth for the better part of three centuries. Here, Bob Singleton, Queens historian and program director of the Greater Astoria Historical Society, stands at a boulder, that, records indicate, marked the Brooklyn-Queens boundary in the 18th Century. The rock can be found at Varick Avenue and Randolph Street. 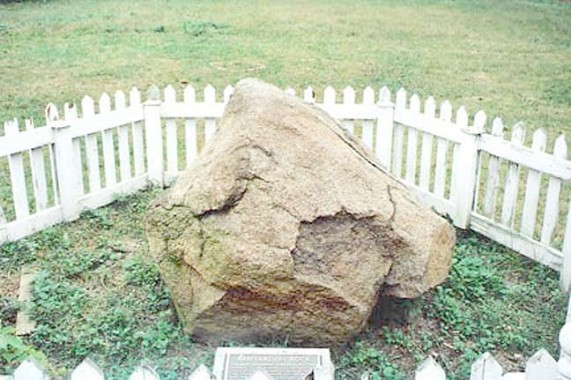 The Adrian and Ann Wyckoff Onderdonk House, at Flushing & Onderdonk Avenues, was built, it is thought, by Paulus Van der Ende in about 1712, but it’s what’s in the back yard that has our attention today…

This is purportedly the famed “Arbitration Rock” that formed another disputed Brooklyn-Queens boundary. It was located to the west of Flushing Avenue and Onderdonk Avenue until Onderdonk was extended west in the 1930s. According to the Greater Ridgewood Historical Society, Arbitration Rock was buried beneath the pavement for decades, until, the story goes, a chance excavation in December 2000 revealed it once more. It has been placed in the back yard of the Onderdonk House (which is entirely in Queens) for the time being. Surveyor Peter Marschalk set the boundary, originally the Kings County-Newtown Township line, in 1769. 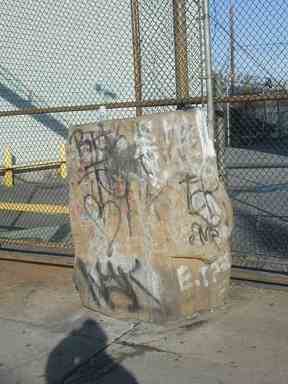 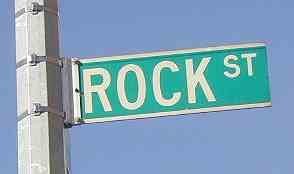 On Morgan Avenue and Rock Street, somewhat to the south and west of the other two stones, is yet another boundary rock. This one appears to have been artificially cut at some time in the past; it’s certainly been artificially decorated with the tribal markings of the 20th Century.

The rock disappeared sometime in 2008, but has recently magically reappeared, sans graffiti.

The Kings-Queens boundary was set sometime in the late 1700s as a straight diagonal line that cut through Ridgewood and Bushwick. But more changes were to come: as the area became more populated and row and detached homes replaced the farms, some houses found themselves with their kitchens in Queens and their bathrooms in Brooklyn! In the 1920s, the boundary was placed in a zigzag line, with Cypress and St. Nicholas Avenues getting the lion’s share of the boundary. 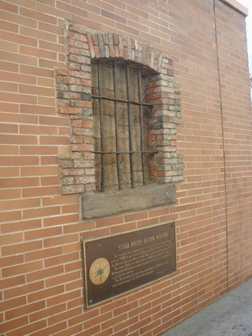 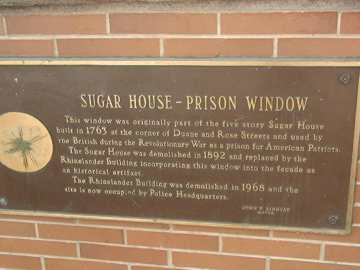 Sugar refineries, called sugar houses, were built in lower Manhattan during the mid to late 1700s to alleviate the need to import refined sugar from Europe. The sugar houses, with their small windows and low ceilings, were considered ideal by the British as prisons, and as on the prison ships in Wallabout Bay, conditions were notoriously inhumane, and may patriots died in captivity.

This sugar house stood at what is now Avenue of the Finest and Madison Street; its window was later incorporated in the Rhinelander Building, itself torn down in 1968. The window now stands in the pedestrian plaza behind the Municipal Building near City Hall.

As many as 800 Americans were crammed in a typical sugar house,

suffering a tremendous amount of abuse and left with the choice of either starving or freezing to death. Conditions were so bad that many inmates carved messages and their names on the beams and walls. For years afterward these ‘last wills’ remained.–Kenneth Dunshee in As You Pass By

Richard Rodgers and Lorenz Hart’s “Manhattan”, written in 1925, works as a handy dandy travelogue of the five boroughs. But…since it was written over 7 decades ago, some of the landmarks mentioned have modern-day listeners scratching their heads and reaching for their NYC guidebooks! Take the fourth verse….sing along if you want…

We’ll have Manhattan,
The Bronx and Staten Island too,
We’ll try to cross Fifth Avenue.

As black as onyx
We’ll find the Bronix Park Express,
Our Flatbush flat, I guess,
Will be a great success,
More or less.

A short vacation
On Inspiration Point we’ll spend,
And in the station house we’ll end.

But Civic Virtue cannot destroy
The dreams of a girl and boy —
We’ll turn Manhattan
Into an isle of joy!

Inspiration Point? Civic Virtue? What could Rodgers and Hart been referring to? 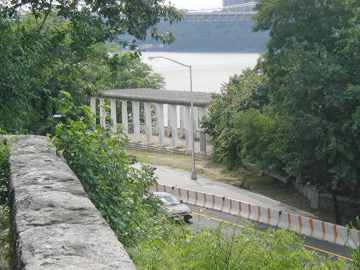 Inspiration Point, a sightseeing and romantic mecca in its early days, was built in 1924. The site of a natural rocky outcropping in the Hudson River, the site got its Greek temple shelter that year, and it undoubtedly inspired the song lyric. 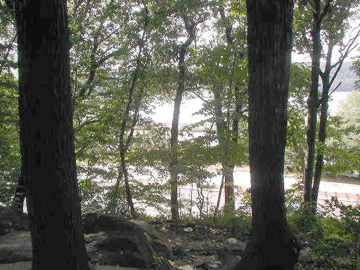 An abandoned park along Fort Washington Avenue leads down toward the Henry Hudson Parkway and “Inspiration Point” is visible through the trees.

The park is near the beautiful Castle Village complex, which replaced Paterno Castle in the late 1930s. 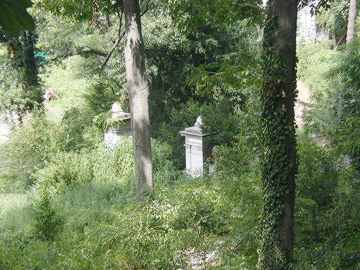 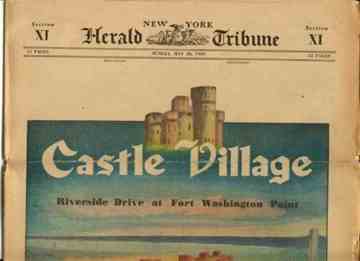 Walking north from Inspiration Point, you can see the remains of a gateway that led to the castle-like grounds of one of the mansions that overlooked the Hudson River. Just north of here, you enter Fort Tryon Park and the Cloisters are in view. 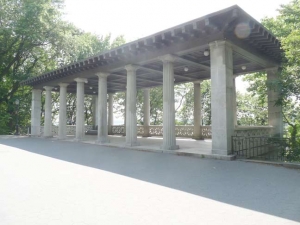 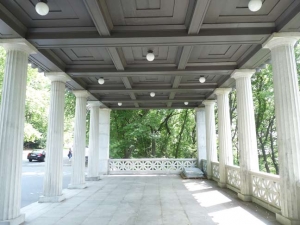 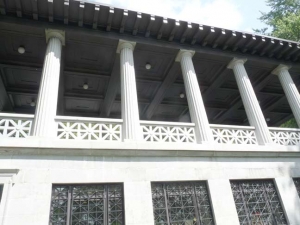 Further south, a similar structure has been refurbished with the basement serving as the Grant’s Tomb Vistor Center. 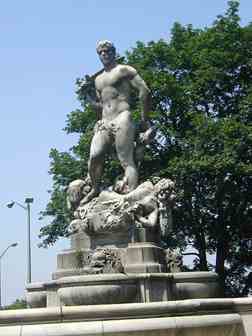 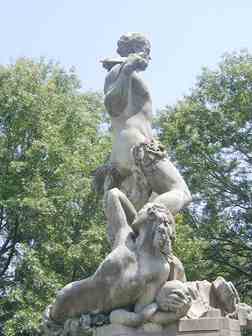 “Civic Virtue” meanwhile  is a large statue of a naked youth astride a pair of writhing mermaids, produced by Frederick McMonnies in the 1920s and placed at Queens Boulevard and Union Turnpike in Kew Gardens in 1941, after a stint at City Hall Park.

In 2012, there was chatter about moving the statue once again, to Green-Wood Cemetery, as some Queens politicians are uneasy with the work’s perceived sexism. 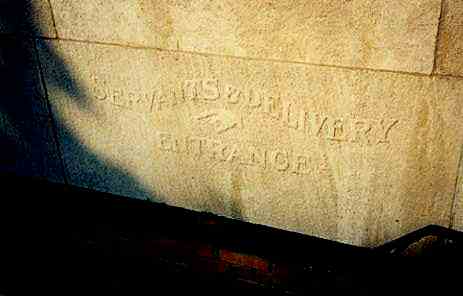 Finally, on the upper west side we are reminded of our place in the world, as if we needed reminding.

TALES OF THE T-POLES. NYC’s variety of telephone pole lighting fixtures over the decades.

I found the piece about scrabble fascinating. I grew up in Jackson Heights right off 35th Ave. Later in life I moved to Bethel CT. right near the Newtown line, yes, the area was called Dodgintown. What a coincidence.