Early 2010 in NYC has featured some crazy weather — three feet of snow in February, which fell in three storms; sunny and very warm in March, accompanied by several rounds of flooding rain; and at this writing on April 7, 85 degrees is expected for a high temperature in the afternoon. Your webmaster took advantage of one of the March breaks in the monsoons to wander about High Bridge in the Bronx, and as my fleece jacket allowed the sun to soak my shirt through with sweat, a march across Washington Bridge to 181st Street, the main east-west shopping artery in northern Manhattan. (The Alexander Hamilton Bridge – Trans-Manhattan Expressway – George Washington Bridge route is the main traffic express route) … 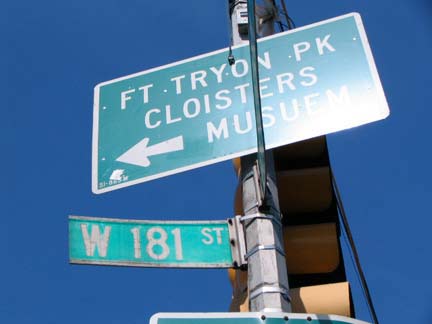 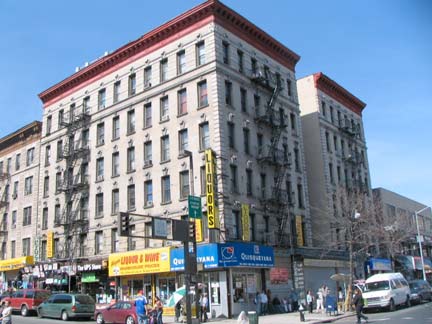 One of the massive apartment buildings found along 181st, this one at Audubon Avenue. John James Audubon (1785-1851), “America’s Woodsman,” was born in Haiti, moved to just outside Philadelphia to avoid conscription into Napoleon’s army … and took an interest in America’s wildlife:

Audubon set off on his epic quest to depict America’s avifauna, with nothing but his gun, artist’s materials, and a young assistant. Floating down the Mississippi, he lived a rugged hand-to-mouth existence in the South while [wife] Lucy earned money as a tutor to wealthy plantation families. In 1826 he sailed with his partly finished collection to England. “The American Woodsman” was literally an overnight success. His life-size, highly dramatic bird portraits, along with his embellished descriptions of wilderness life, hit just the right note at the height of the Continent’s Romantic era. Audubon found a printer for the Birds of America, first in Edinburgh, then London, and later collaborated with the Scottish ornithologist William MacGillivray on the Ornithological Biographies — life histories of each of the species in the work. —Audubon.org

In 1839 Audubon purchased an estate on the Hudson River in what is now Washington Heights, and passed away there in 1851 — he is buried in Uptown Trinity Cemetery. 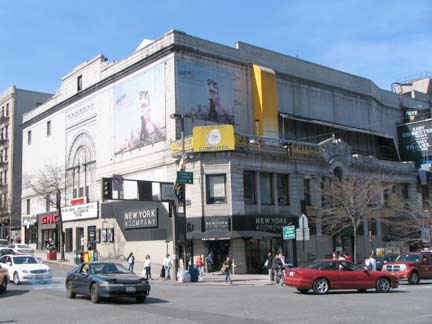 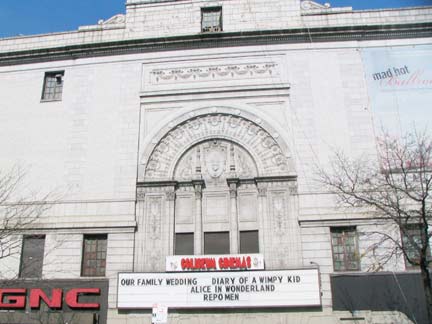 On the NW corner of Broadway and West 181st is the massive Coliseum Cinemas.

…the Coliseum Theatre boasted to be the third largest theatre in the United States, with 3,500 seats, when it opened in 1920. B.S. Moss was involved with the launching of the theatre as an entity and it later came under the management of RKO. The architects were DeRosa and Piera, who designed other movie palaces of that period.

In its heyday many of the most famous vaudeville acts came to the stage of the Coliseum. The Marx Brothers, W.C. Fields, Eddie Cantor, Uncle Don’s Kiddie Show, and Gertrude Berg of television’s “The Goldbergs” were among the performers who had been there. Cinematreasures 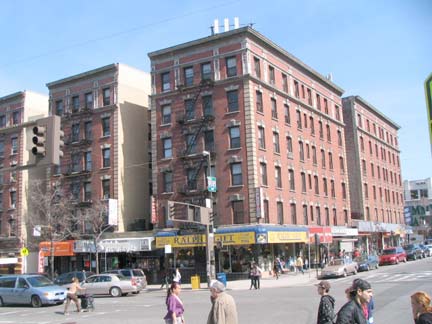 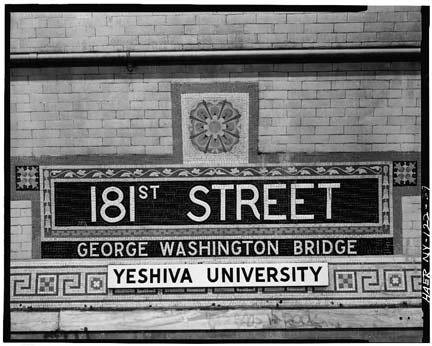 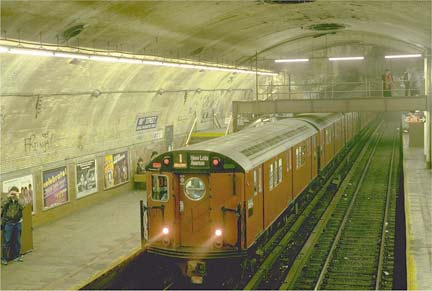 A pair of “vintage” shots from the Broadway IRT line’s 181st street station, from nycsubway.org, from 1978 and 1987, when the R32/R33 “redbirds” were still running. The station is one of the deepest in the system and the station is in a barrel vault with three overhead crossovers, one of which is still open. At left, the original tiled nameplate has been altered twice since 1906, when the station first opened. 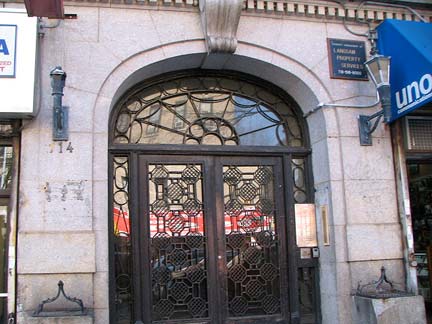 714 West 181st Street. Oddly, south of about 165th Street most “west” streets end their house numbers in the mid-600s, while they go considerably higher north of that. Jerome Avenue in the Bronx forms the east-west divide north of 161st, and while the Harlem River causes the house numbers to skip a few hundred, Manhattan Island also curves a bit west in this part of town, enabling the house numbers to climb higher. 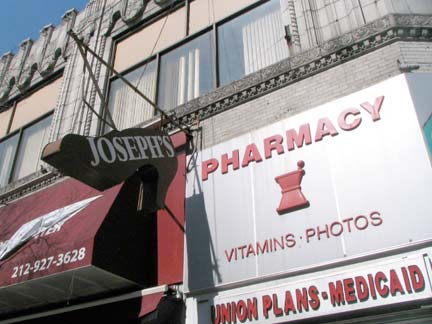 Several old-fashioned signs persist on West 181st from Bennett Avenue west to Ft. Washington Avenue, including the pestle in the vessel shown here. Unfortunately, some are closing… 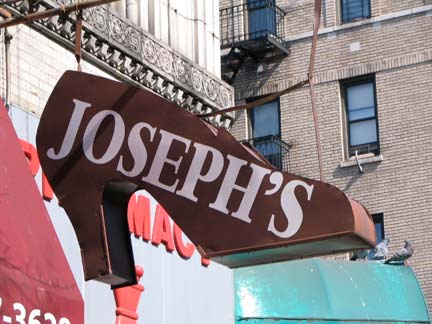 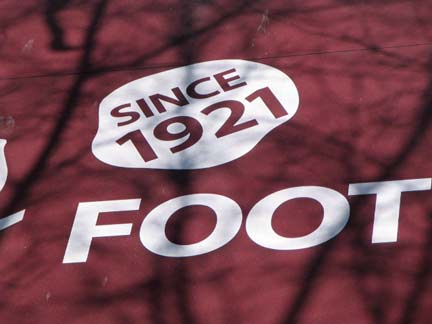 It appears that Joseph’s Shoes and Orthopedic Appliances, which was in business for almost 90 years, is either moving or closing. 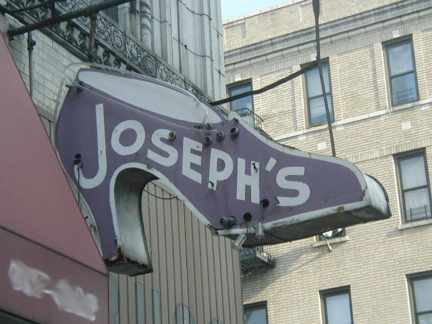 Its old-fashioned neon sign was covered with a modern exterior a few years ago, but the hi-heel shape was retained. 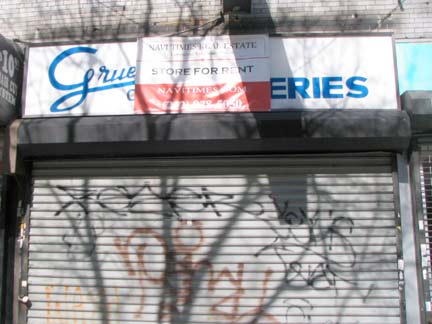 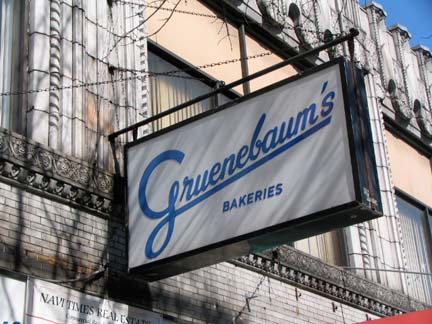 Changing demographics doomed Gruenebaum’s, a couple of doors way from Joseph’s, but there is still a Gruenebaum’s in Riverdale, Bronx.

Gruenebaum’s, according to an April 6, 2001 article in The New York Jewish Week, was “founded…in Frankfurt, Germany, early in the 20th century.” The article continues:

The Frankfurt bakery closed its doors in 1938 and the family immigrated to the United States in 1940. Banin’s father worked for different bakeries until 1957, when he bought out a store on 177th Street and Broadway. In 1961, he opened Gruenbaum’s on 181st Street and “the place took off. Bakeries was all my father did,” says Banin. “That was what he knew.” Daily Snowman 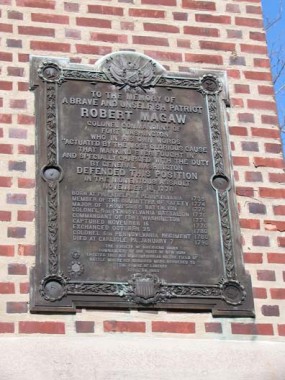 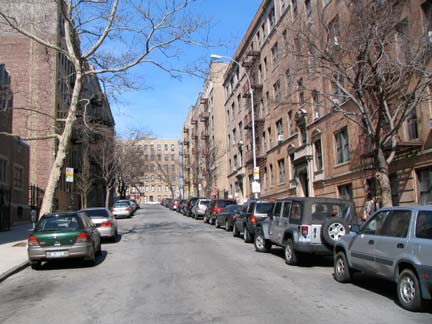 Revolutionary War hero Colonel Robert F. Magaw claims a one-block street from West 181st-183rd Street (182nd is skipped) west of Bennett Avenue, and a very old plaque on the corner of West 181st commemorates the Philadelphia lawyer who commanded Fort Washington during a British attack on northern Manhattan in 1776 but was forced to surrender. The British occupied the island until the war ended in 1783. When the street was mapped in the 1910s and laid out in the 1930s it was apparently briefly called Fort Washington Place and occupies the old position of the driveway to the estate of newspaper publisher J.G. Bennett (see below). 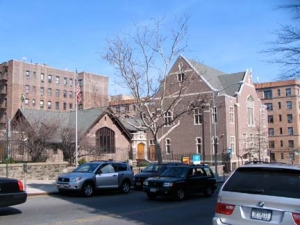 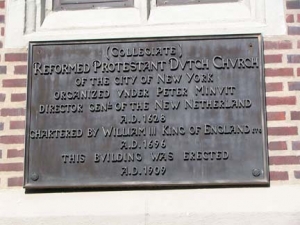 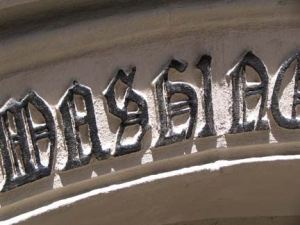 Fort Washington Collegiate Church, built in 1909 at Ft. Washington Avenue and West 181st, a descendant of the Reformed Protestant Dutch Church. It was constructed on the former property of James Gordon Bennett, publisher of the New York Herald (cf. nearby Bennett Avenue).

Closeup of the lettering over the doorway to the parish house, the larger building on the right in the photo.

Worked up there as a Police Officer in 1984, hasn’t changed much. Once had to take junkie off W 181 St who thaught he was sniffing cocaine that was falling from the Sky (It was snowing). I and my partner was sitting up the Block watching this idiot. I beeped the Siren. The idiot looked up, lost his balance, and fell down and broke his arm. We took him to Columbia Pres and laughed all the way back to the Stationhouse

Worked up there as a Police Officer in 1984, hasn’t changed much. Once had to take junkie off W 181 St who thaught (“thought”) he was sniffing cocaine that was falling from the Sky (“sky”) (It was snowing) (“it”). I and my partner (“My partner and I”) was (“were”) sitting up the Block (“block”) watching this idiot. I beeped (?) the Siren (“siren”). The idiot looked up, lost his balance, and fell down and broke his arm. We took him to Columbia Pres and laughed all the way back to the Stationhouse (“station house”)

I and my partner is perfectly acceptable and correct.

Some years before you did your survey of 181st St., Gruenebaum’s took over another bakery, Gideon’s, whose store was on 187th St. just off (west) of Ft. Washington Ave., and it should have been extant at the time of your survey (perhaps still under its own name, but be assured it was owned by the Gruenebaum family).

Ever notice, along Broadway and 181st, the streetlight / stoplight combo designed and built similar to that which used to graze – er, grace Jamaica Avenue in Queens?

I remember those places well. I bought my sons’ first shoes at Joseph’s and remember the old ladies serving the counter at Gruenebaums. On Fort Washington Avenue was Kappys record store where we all went for our music, it was run by two long haired hip dudes. It was a great neighborhood to grow up in.

I do remember Kappys records, next door to it was a candy store.

I lived at 481 East 181 street and Washington Ave in the Bronx. Good friends and memories of the family’s such as Savarese, Guara, Orefice, Fusco, Zimmerman, Kelly,

Those were some of the best years of my life with good friends which I miss and wish I could contact. My email is chickie221@cox.net. If you remember me email me. Would love to catch up.

I forgot to put my maiden name Gladys (Calzat) nickname Chickie. my house was on corner of 181st & Washington Ave. We hung out at Joe’s candy store. contact me at 5400 Tropical Toucan Ave- Las Vegas, NV 89130.

I lived at 191st Street and St. Nicholas Avenue from 1971 through 1979 and spent many a weekend shopping with my mother along 181st Street. There was a Woolworth’s on the southwest corner of 181st and St. Nicholas and a Chock Full ‘O Nuts across the street on the southeast corner. There was also a department store along the north side of 181st across from the Woolworth’s that was called Wertheimer’s.

These photos are great! Thank you for sharing. We went to Joseph’s for our shoes. I remember the rulers they gave out one year!

I lived at 193rd street and audubon ave right across from GWHS from 1969 to 1990 but my best friend lived at 181 street and broadway across from the rko coliseum and mc donalds and I remember as teenagers in the late 70s and early 80s we used to go get a tan and drink quarts of colt 45 at the roof of the 6 story building overlooking broadway and sticking the caps on the tar wall near the door.. Once we had most of the wall full the and the superintendent caught us and took them all off and put a lock on the door. The good old days.

Great memories that will last forever. I grew up on St. Nicholas Avenue between 177th and 176th streets. Left in the Summer of 1974 at the age of 15 and then returned in 1979 to 1980 up in Riverdale. I still visit friends and family in NYC at least a couple times a year and every time I’m there I always walk thru the old Washington Heights neighborhood and reminisce. I went to P.S. 132, then middle school at St. Spyridon, eventually did my freshman year at Brooklyn Tech before moving to Florida. Kappy’s, Castle Village, Jew Park, RKO, Woolworth’s, Fort Tryon, Highbridge Pool, etc. etc. It’s a third world shit show now but can’t take away what it once was.