Two otherwise unconnected women whose names are separated by a single letter are remembered on street signs in Woodside, Queens and Carroll Gardens, Brooklyn.

In 1995 the corner of 31st Avenue and 60th Street in northwest Woodside was designated Eileen Dugan Square in honor of  aschool crossing guard in the employ of Corpus Christi grammar school, killed by a sports car in November 1994 while she was helping an elderly resident to cross.

Along this stretch of 31st Avenue there are a number of streets named for local guardians unfortunately killed in the line of duty. They are also samples of remaining blue and white signs formerly used for these designations; DOT practice has been to go with green signs since 2000 or so.

I was mildly surprised to learn that the corner is not named for the renowned New Zealand poet/journalist (1894-1972), since I thought she may have had a Queens connection. 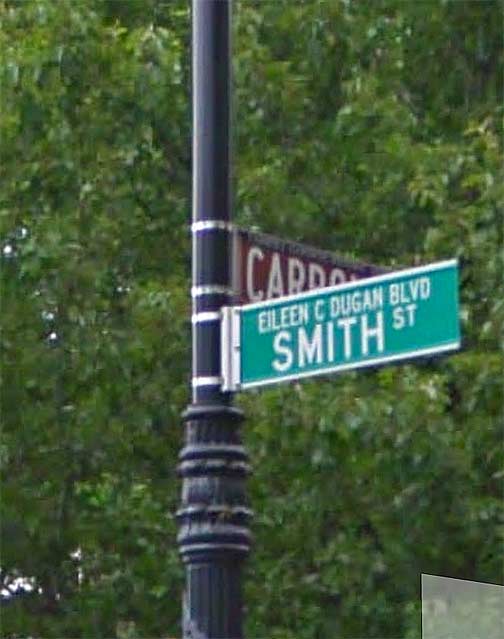 Meanwhile, in Carroll Gardens, just about the entire stretch of Smith Street north of the BQE was named for a popular Assemblywoman who served from 1980-1996 and died at the young age of 51 that year. Unusually, both names appear on the same sign; this is also done with Jewel Avenue/Harry Van Arsdale Jr. Avenue in Kew Gardens Hills, which renders both names illegible.

The “Eileen Duggan Square” sign in Queens was also one of the few to have utilized Highway Gothic E (as for the 2″ high “SQUARE”) in the vinyl/aluminum 9″ high sign era that first commenced with the color-coded era in 1964; Highway Gothic E also saw some service (along with the now-defunct Highway Gothic A) on some black-on-yellow Manhattan street signs (made from c.1960 on) in the last years of the use of the 1950’s design from when T.T. Wiley was Traffic Commissioner.