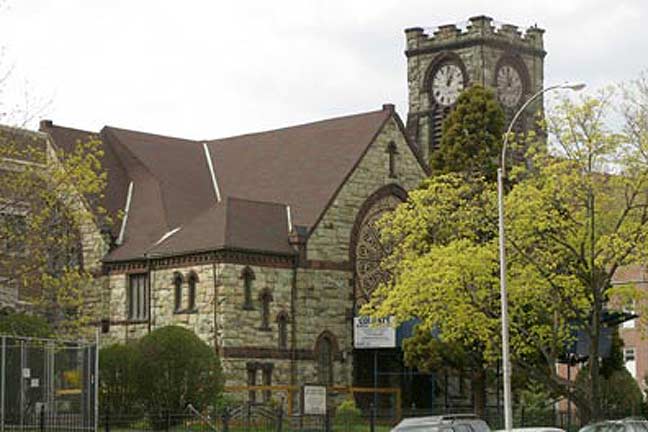 The Bay Ridge United Methodist Church, at 4th and Ovington Avenues in Bay Ridge, is one of the most beautiful buildings in NYC to ever be torn down.

Known by some Bay Ridgeites as the “Green Church” because of its unique green ashlar construction, it was the only building in New York City with a serpentine stone facade. The stone is believed to have been quarried from the Revolutionary War battlefield of Brandywine. There is a crypt adjoining the church containing the remains of more than 200 early residents of Bay Ridge. The dwindling Methodist congregation, 60 in number, had put the building up for sale.

The “Green Church” was built in 1899 and designed by George Kramer. It was one of the last relics, along with the Episcopal Christ Church at Ridge Boulevard and 73rd Street, of Ovington Village, formed by a group of artists and artisans in 1850 who had purchased the Ovington family farm. Incorporating under the name Ovington Village Association with Charles Parsons as president, they opened Ovington Avenue through the region, lined with spacious homes on 400-foot wide plots. Ovington, still boasting a bend in the road between 3rd and 4th Avenues, ran from the concert hall (the Atheneum) to the village. That part of Ovington is now lined with beautiful brownstone buildings and has been suggested for landmarking. 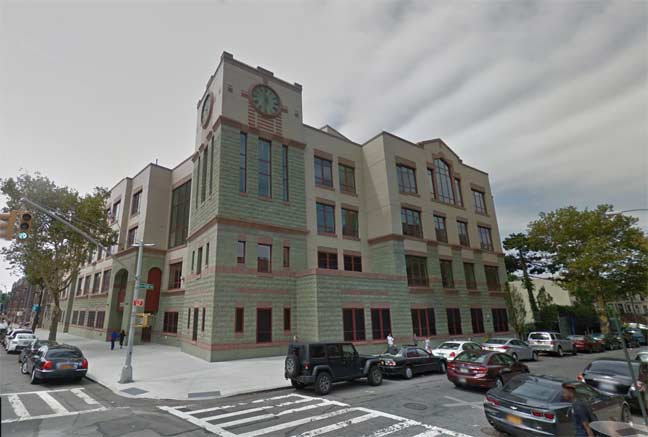 The “Green Church” was razed in 2008 and replaced by PS/Intermediate School 30. As a sop to critics who demonstrated and complained about the church’s destruction, the building was given a corner clock tower and some green coloration in the brickwork.

For more on the church, the efforts to save it, and Ovington Village, see this FNY page.

Just love the way they “threw the dog a bone”, with mint green tinted brick & that Back to the Future clock tower.

They could have kept the front facade of the church and built the rest behind it like they did a school and an armory on 96th st and Park but that would have probably jeopardized a few
construction worker jobs.

It seems that even though one views the past through a haze of unreality (was it really so picturesque in bay ridge in the 50’s and 60’s?) , what is being left in it’s place is downright ugly with no design,gracefulness or beauty. Witness the garish and cheap signage seen on the Sunset Park pages or in the commercial districts or the faux stucco and italianate facades on what were cute 1910’s and 1920’s construction. Many other municipalities require some sort of standard and /or the populace just won’t stand for the dreck that Brooklynites seem to embrace. Why is that? I hurts my sense of place and corrodes my memories.

Its much easier to destroy then to construct something beautiful