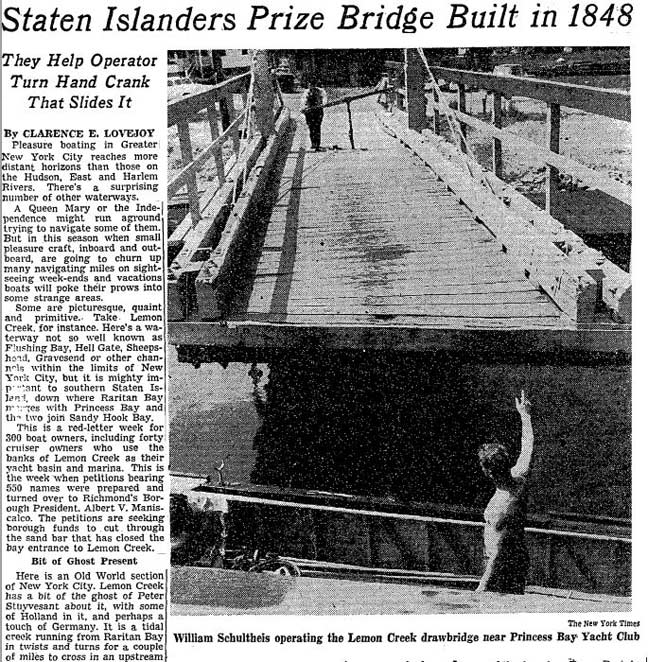 When we think of the city’s oldest drawbridges, the retractable examples on Borden Avenue across Dutch Kills and Carroll Street across Gowanus Canal come to mind. But those crossings are operated by machines. If we could go back in time to find the city’s last human-powered drawbridge, where would it be?

The answer would take us to Prince’s Bay, a rural corner of the city that is still today happily underdeveloped. Lemon Creek on the South Shore of Staten Island, reported in a 1955 article by New York Times. The bridge connected Seguine Avenue to Johnston Terrace.

It was at the mouth of Lemon Creek that a drawbridge was constructed in 1848. Powered by a four-foot iron key, the operator manually turned it sixty times to retract the one-lane wooden bridge onto the western bank. 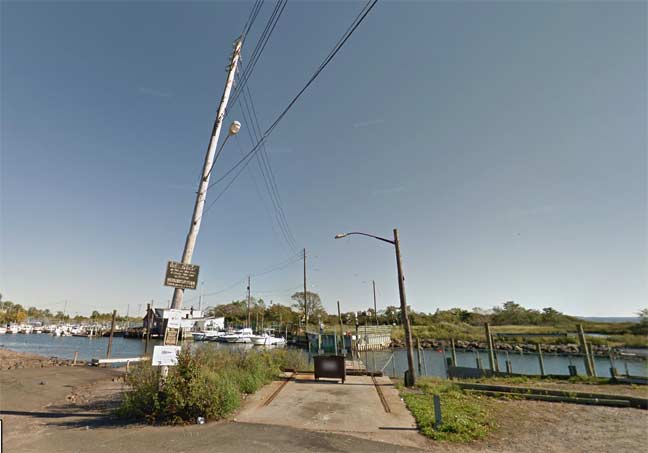 I have no idea when this bridge was automated or demolished. Today, the only evidence of this bridge, on Johnston Terrace east of Bayview Avenue, are the electric wires that connect to lampposts on either side of Lemon Creek. A 1980 aerial survey shows that there was still a bridge across Lemon Creek, but by then it was powered by machine.

Would anyone know the year that the Lemon Creek Drawbridge turned its key for the final time?

When I was a kid, there was a drawbridge at Hylan Blvd over the creek. I don’t recall when it was replaced with a fixed span.

I am wrong. No movable bridge on Hylan.

My Uncle worked on that Bridge. He has been gone since the 1980’s but I can tell you it was the early 70’s when they closed that bridge.

According to Howard H Cleaves in an article “Lemon Creek In Retrospect” published in the “Staten Island Historian” Vol XXXI , No 13, Jan-Mar 1973: “During the winter of 1957-58 the bridge became automated, the opening and closing done by electric motors.”

Howard Cleaves was the person responsible for bringing the purple martins to the area and a reliable historian.

I am part of the 3rd generation who grew up next to the bridge. My great grandparents, the Schopps, moved there in 1897 and built the hotel that used to stand at the bend in the creek. My grandfather was Sandy Cuthbert who, with my grandmother, ran a boating and fishing business. My parents eventually took over the business.