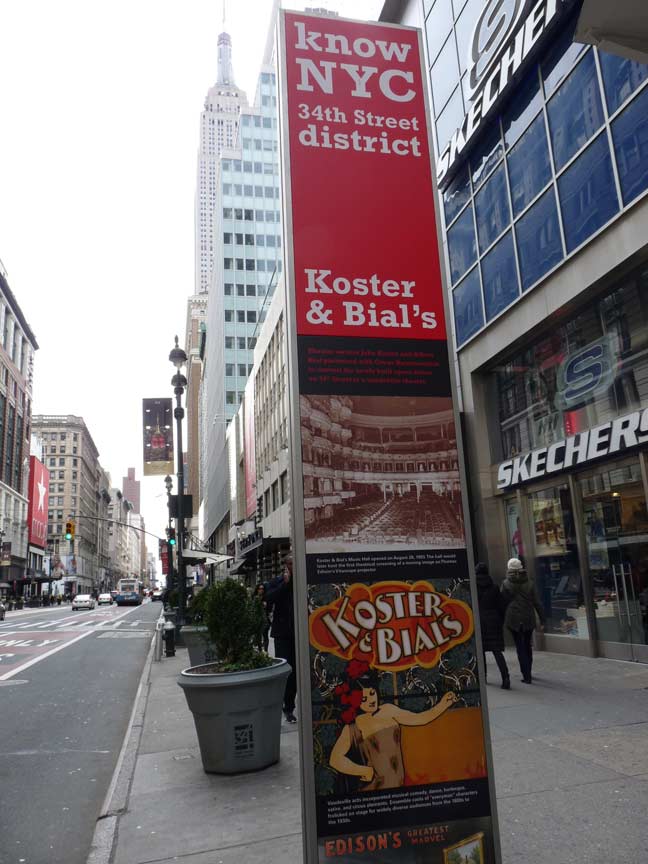 In one of the great NYC injustices, there is no immediate transfer from the Long Island Rail Road in Penn Station to the subway lines that run under 6th Avenue including the PATH train, which I have had to take for a few weeks in the spring of 2016, necessitating a forced march down 34th Street each morning. However some surprises have turned up. A new informational “kiosk,” more of a narrow sign than anything else, notes the presence of Koster & Bial’s, an opera and vaudeville house that was in business on the block between 1893 and 1901. 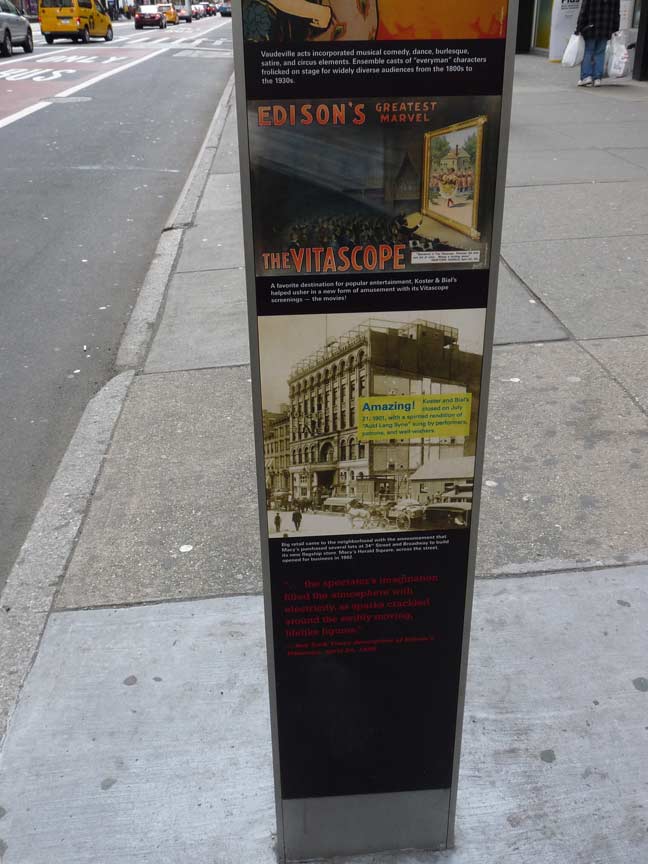 John Koster and Albert Bial were German immigrants who ran a series of entertainment establishments and concert halls in the late 19th Century. They opened their first venue at 6th Avenue and 23rd Street, in 1879, a beer garden with occasional performances. Two years later Koster & Bial opened a second establishment at 115-117 West 23rd; this one was more of a theatre offering song and comedy, a precursor of sorts to vaudeville. K & B remained in the 23rd Street area until 1892, when they moved uptown, as much of NYC’s entertainment business then was doing, to West 34th, where they ran a larger theater under the aegis of Oscar Hammerstein, Senior until their deaths in 1895 and 1897 respectively. The uptown Koster & Bial’s property was purchased by R.H. Macy’s in 1901, and The World’s Biggest Store remains on the property today.

Thomas Edison presented what he called the first demonstration of a moving picture at K&B in 1896, though that accomplishment is claimed by others. 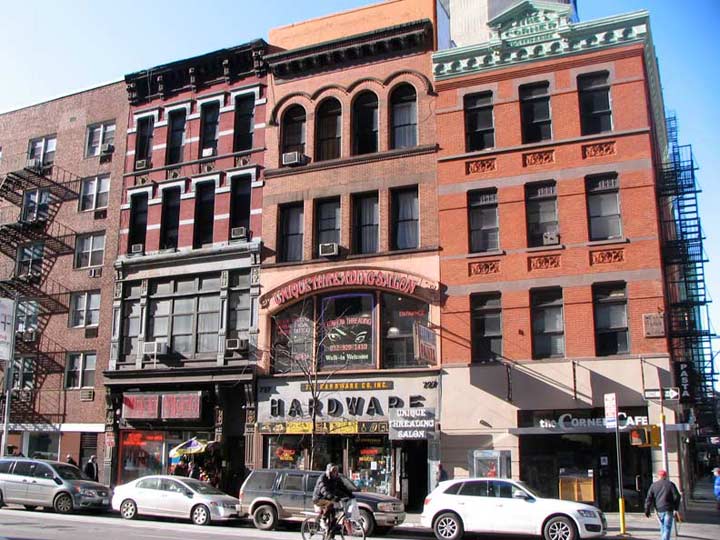 There’s a more tangible and immediate remnant of Koster & Bial’s further downtown at 6th Avenue and West 24th, where there’s a handsome brick building that has somehow resisted being demolished in favor of high-rise apartment buildings on that stretch. “The Corner” building  was constructed from 1886-1887 and served as K&B’s offices, also containing a beer bottling business. Ironically it was part of the K&B empire for only a short time but it has advertised their former presence forevermore.

That corner, of course, was also the longtime home of Billy’s Topless, before new regulations ultimately doomed it.

Re your opening comment, there used a connection–the famous (infamous) Gimbel’s passage. I think you have done something on this in the past.

There is an out-of-system underground passage that runs from the 7th Avenue subway lines to the 6th Avenue lines under either 32nd or 33rd Street; sorry I cannot be more precise than that (although some googling should turn up more information). It was closed down because of muggings and other crimes since it was a continuous block-long passage.

Apparently known as the Gimbel’s tunnel (from the department store of the same name). Apparently there is talk of re-opening the tunnel to connect to the Penn Plaza complex. http://gothamist.com/2009/02/04/underground_passageway_between_hera.php#photo-1
http://www.mas.org/gimbels-passageway-and-the-penn-station-underground/
https://forgotten-ny.com/2015/09/under-6th-avenue/

There is still a passageway under 33rd Street between Seventh and Sixth Avenues, but it was closed in the early 1980s (?) due to security issues and has never reopened. It was called the Gimbels passageway because it ran alongside the department store’s basement with direct entrances. At the west end it connected with Penn Station and the IRT 7th Ave. Subway. At the east end it led to PATH, the BMT, and IND subways below Herald Square. Used it many times before it closed. Entrance was adjacent to the Uptown #1 train near the south end of the platform, outside of the turnstiles. There was never a free transfer between the subways, unlike below 41st Street or 14th Street where there are block long passages. But at least a person could walk between Penn and the Herald Square transit complex without going outdoors in bad weather.

It should be reopened.

I disagree that it should be opened again. I long thought that it should, given that the crime rate in NYC has improved greatly since the last time the tunnel was open. However, they recently installed a pedestrian plaza along 32nd St. between 6th and 7th, which quickly became an open-air drug bazaar with strung-out addicts littering the benches and causing problems. The plaza was quickly removed. If that happens above ground, one can only imagine what would happen below ground. I would, however, like to take a tour of the tunnel as it exists now. Is JC Penney where Gimbels used to be and, if so, where are the entrances from JC Penney to the now-closed tunnel? Can we find them in the store or in the Manhattan Mall somewhere?

Love the image with Empire in the background. A view you never get tired of.