Those of you who follow the Kevin J. Walsh facebook page know that I spent much of the year working for a publisher in Hoboken. I spent precious little time exploring the place, as I was kept quite busy well into the evenings during the prime exploring times between May and September, when there is still light after work. I have gotten plenty of Hoboken photos that haven’t seen the light of day and will post them, eventually.

I had expressed a desire to visit the White Mana hamburger joint in The Heights in Jersey City, since I had heard of it and read about it (and its former stablemate, the White Manna in Hackensack) for several years. It’s about an hour walk from the Hoboken waterfront, as long as you don’t mind a climb up a steep set of stairs crossing the ridge that separates Hoboken from Jersey City. By the time I was ready to go, knowing that my stint was ending soon, it was dark out and discretion is the better part of valor, especially in unfamiliar neighborhoods.  That’s where my friend author and musician Lindley Farley (Oddball New York) came in, as he gave myself and fellow photographer Shell Sheddy a lift to the joint, at Tonnelle and Manhattan Avenues. 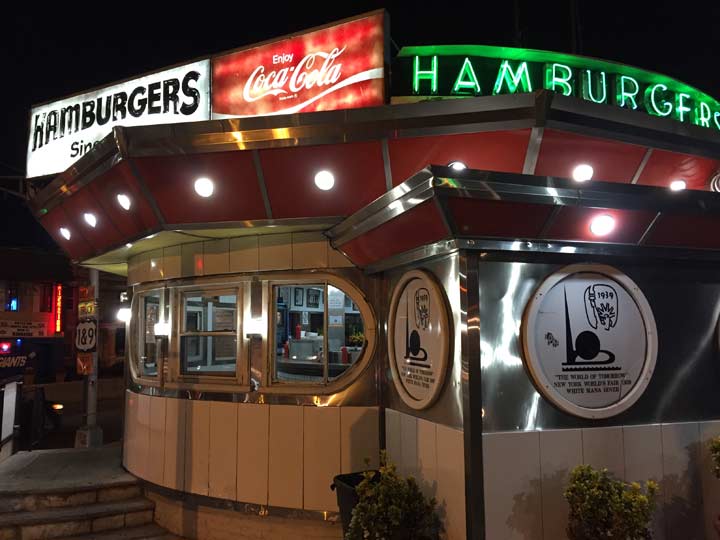 The White Mana, with one N, has its origins at the 1939-1940 Flushing Meadows World’s Fair, evidenced by the Trylon and Perisphere symbols in the rear. It is a tidy, circular building, with a horseshoe-shaped counter. The idea behind so small a restaurant was the “three-step” rule: The person behind the counter need not take more than three steps to prepare the order.

This is actually one of the few remaining public representations of the conical Trylon and/or the Perisphere. There had been a mosaic of the Trylon at Forest Hills’ Trylon Theater (obliterated around 2000) and there is still a small concrete Trylon ornament on a building at 108th and Van Doren Streets in Corona. The circular building was constructed by the Kullman diner manufacturers.

After the fair closed, entrepreneur Louis Bridges purchased it and made it the keystone of a five-restaurant franchise, all known as White Mannas with two N’s, located in Jersey City, Hackensack, Elizabeth and Springfield. Manna referred to the breadlike substance that Yahweh rained down on the itinerant Israelites during their travails in the desert after leaving Egypt in the Book of Exodus. Originally, all of Bridges’ Mannas were correctly spelled with a double N, but after The Jersey City White Manna opened in 1946, a signpainter mistakenly left out one N, and this error is now used to tell apart the two original White Man(n)as that are still operating, one N in Jersey City, two in Hackensack.

In 1979 Mario Costa, formerly a busboy at the Mana (he joined the staff in 1972), purchased it from Luis Bridges’ brother Webster, who by then was running the day to day ops, for $80,000. Then, Bridges opened the White Manor across Tonnelle Avenue, but it didn’t survive. In 1979, Costa was 23 and he still owns the place. A few years ago, the intersection was nicknamed Mario Costa Corner.

Until recently the White Mana had a “Curb Service” sign outside. The practice started in the 1950s. Several burlesque dancers from Union City’s Hudson Theatre made extra money shuttling orders to the parking lot. Over the years, the Mana has had some famous patrons, from Chuck Berry to Mike Tyson to Dustin Hoffman. Some of them are pictured on the walls. 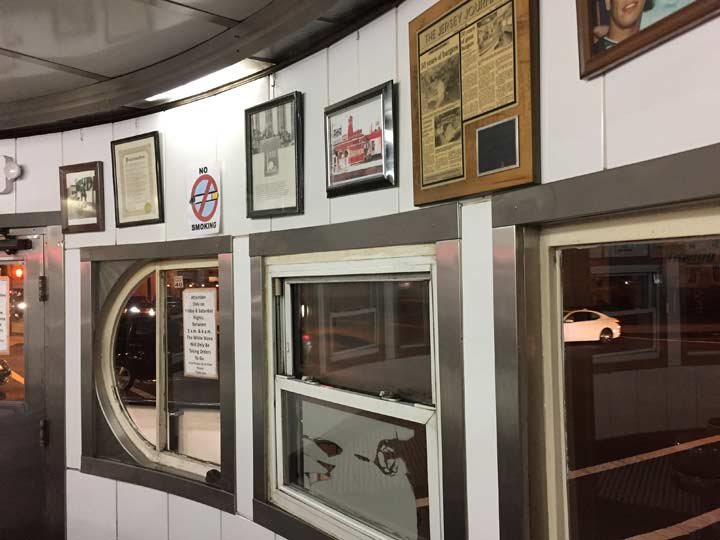 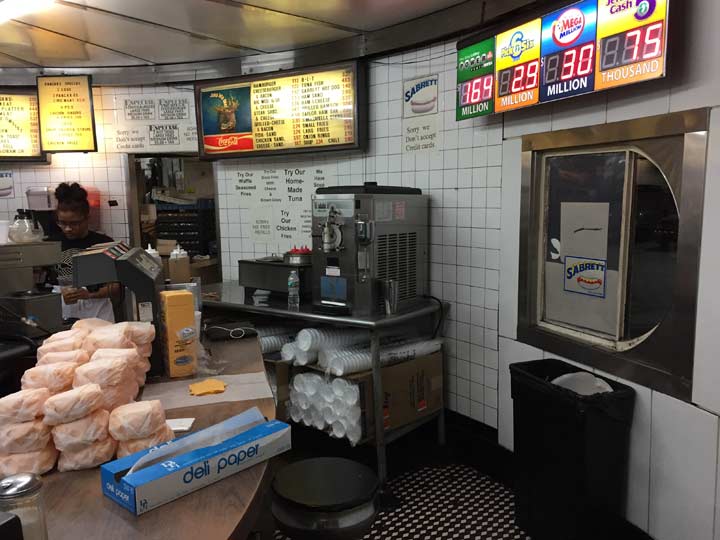 Although the Mana is circle-shaped, for some reason, it does not feel cramped by any means. The kitchen is visible behind the horseshoe counter, which has several revolving seats. Owner Mario Costa (mustache) is pictured with 1970s Brazil and Cosmos soccer star Carlos Alberto Torres. In a strange coincidence, Carlos Alberto, as he was known, passed away on October 16, 2016, just a few days before my arrival here to see his photo on the wall. 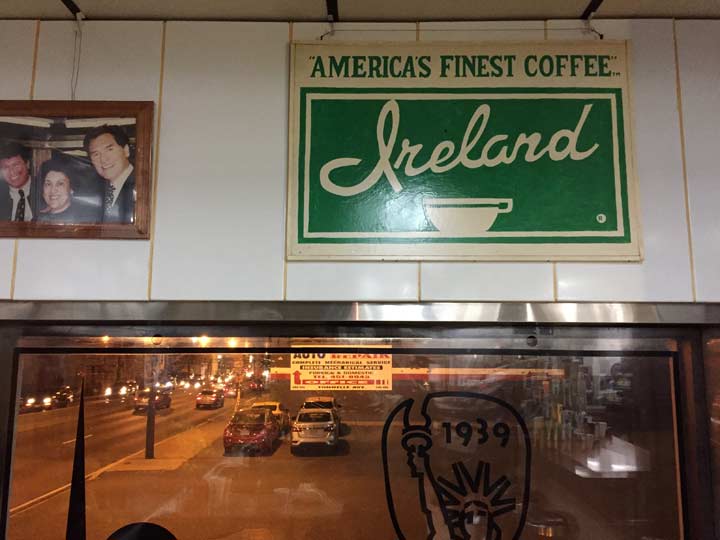 A mystery. The internet is silent on the Ireland coffee brand, with the tagline “America’s Best Coffee.” If anyone has any background, hit me at kevinjudewalsh@gmail.com. I do know that cops drink coffee for free at the Mana.

ForgottenFan “Joe Fliel” Zrodlowski sends this article about Ireland Coffee. It has nothing to do with the Emerald Island; it is named for founder Samuel W. Ireland:

10 of the [Atlantic City’s] dozen casinos pour Ireland coffee, as do a majority of South Jersey hotels, restaurants and office machines. So do the Old Original Bookbinder’s restaurant in Philadelphia, the Four Seasons and Pierre hotels in Manhattan, the Showboat Casino Hotel in Las Vegas, the Holland America Cruise line, and the California-based Ruby’s Diners.

The article dates to 1996, and the casino landscape has changed in Atlantic City since then.

Ernie Anastos, who has been with just about all local TV stations as an anchor at one time or another, beams at left. His most infamous moment was probably letting loose with an unutterable verb on air a few years ago. The cash register, like the signboards, is of a certain age. 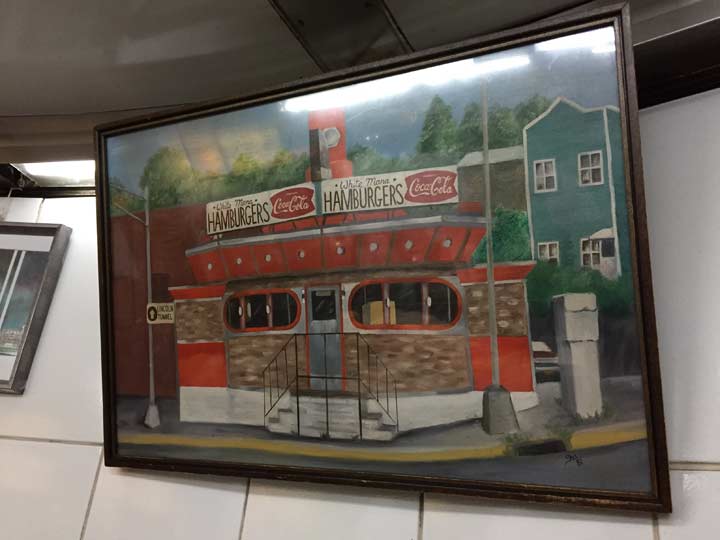 An artist’s rendition of the Mana. 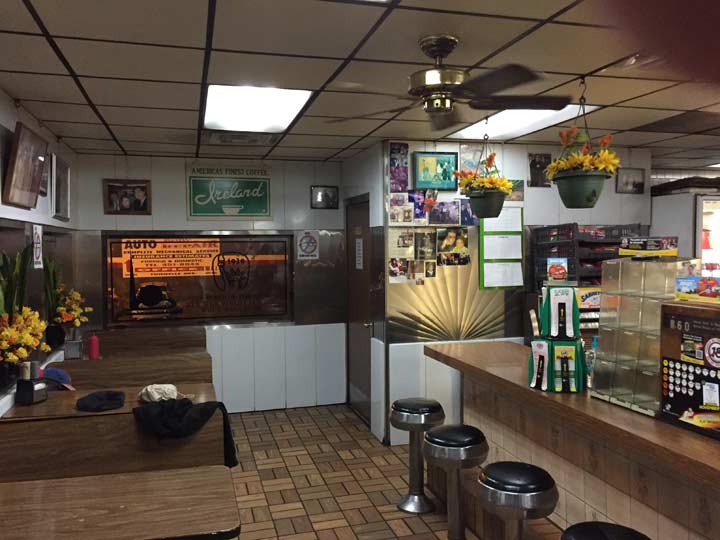 Instead of the counter, we ate at one of the booths. However, the section where the booths are in is a later addition to the Mana done a few decades after the original was brought to Jersey City. 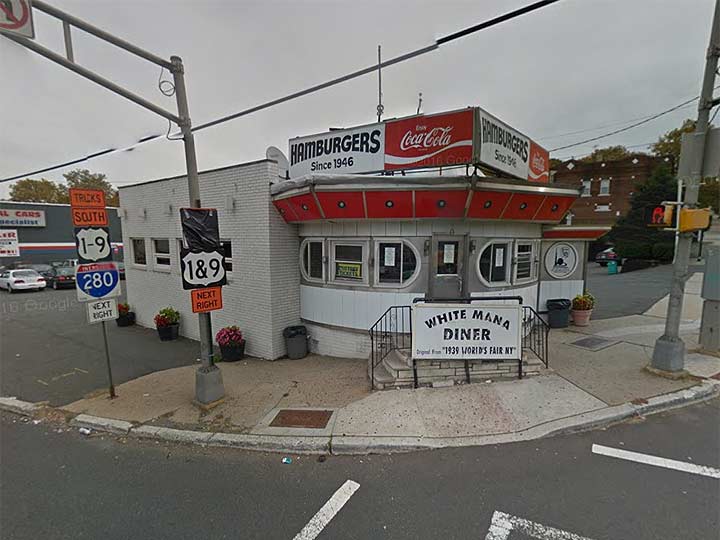 That addition is evident here in a Google Street View shot. 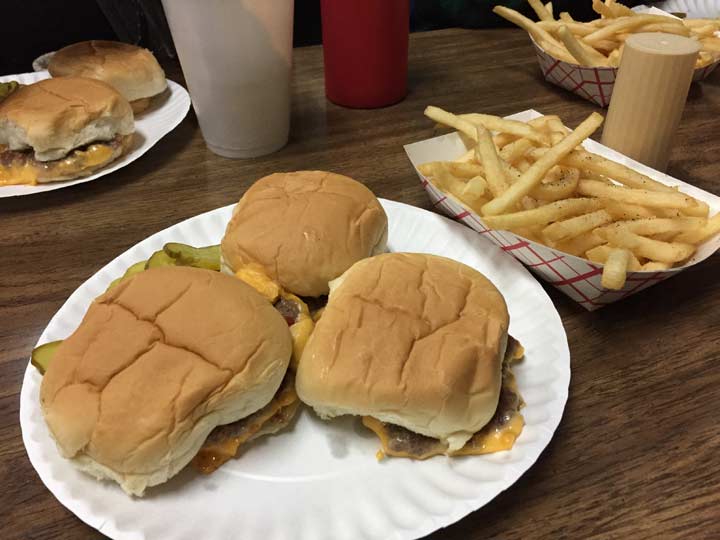 The fare is quite reasonably priced. You will shell out about $10 for 3 White Mana burgers, fries and a drink. The burgers are of the steamed variety you may be familiar with from the White Castle franchise, but they are larger. The buns seem to be of the Wonder variety, but I’m here for the ambience. You will come away filled and satisfied. In the early 70’s I eat there a lot. I worked just across the parking lot at the White Truck dealership, called Hudson County Motors. I believe it’s now a body shop. But was originally a trolley barn.

been to both more times than i can count – but i gotta go with the Hackensack White Manna.