New York is a city with 520 miles of coastline taking into account the city’s islands, inlets, coves, bays, and basins. At places where the land sticks out there are forts, lighthouses, or both. Along with the functional beacons, there are the phony lighthouses designed for decorative purposes with land-based travelers in mind. 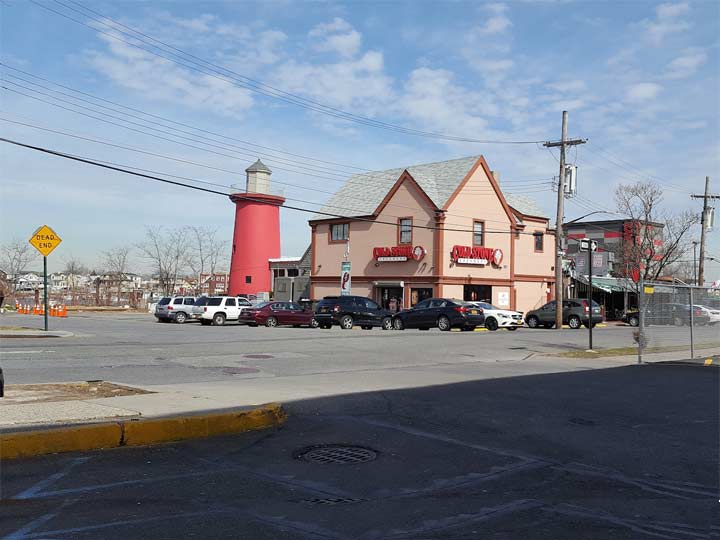 The tallest phony lighthouse is in the Highbridge neighborhood of the Bronx, atop a former book publisher. A more stubby beacon stands atop the electrical substation on Sherman Creek in upper Manhattan. Brooklyn’s phony lighthouse does not emit any light for the boaters of Shellbank Creek on the eastern edge of the Sheepshead Bay neighborhood. Its story relates to a seafood theme restaurant that attempted to bring the scenery of a New England fishing village to Brooklyn. 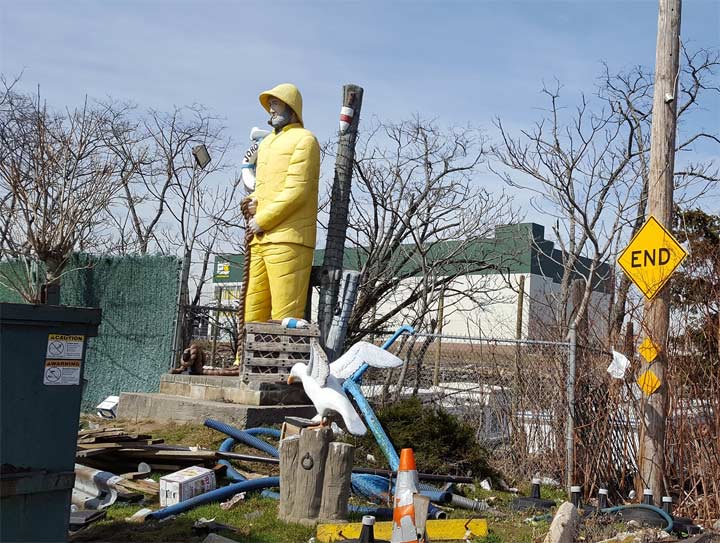 The Jordan family has been in thelobster business since 1938, claiming to be the first to fly live lobster in tanks by plane to customers across the country. In 1979, Bill Jordan Sr. purchased an acre of waterfront property on Harkness Avenue seeking to build a theme restaurant. Its elements included a saltbox-style building, fisherman statue, and lighthouse. As described in a Daily News article, it sought to compete with Lundy’s of Sheepshead Bay, the famed seafood restaurant housed inside a Spanish Mission-style building. In 2005, the film Brooklyn Lobster starring Danny Aiello fictionalized the family’s struggle to run the restaurant as its lender collapsed in the savings and loan scandals of the 1980s. 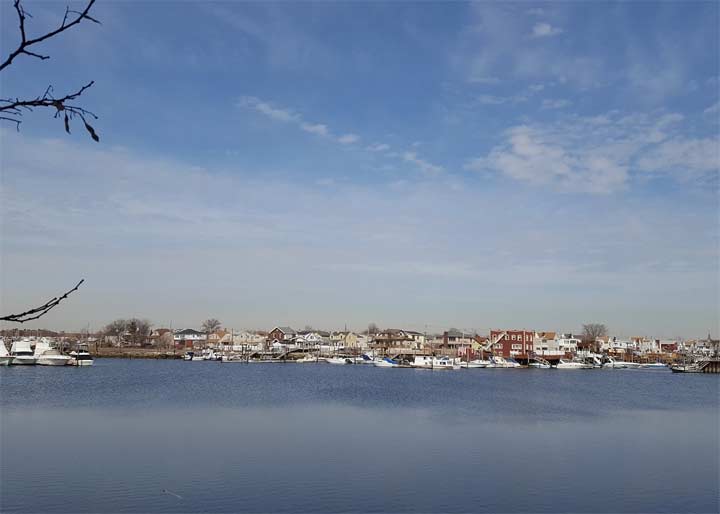 From the lighthouse, one can see the neighborhood of Gerritsen Beach across Shellbank Creek. This community was developed in the 1920s and has its own private beach on the creek. Closer to shore, there is an abandoned boat poking out from the water and a pipe from the property leaking into the channel. 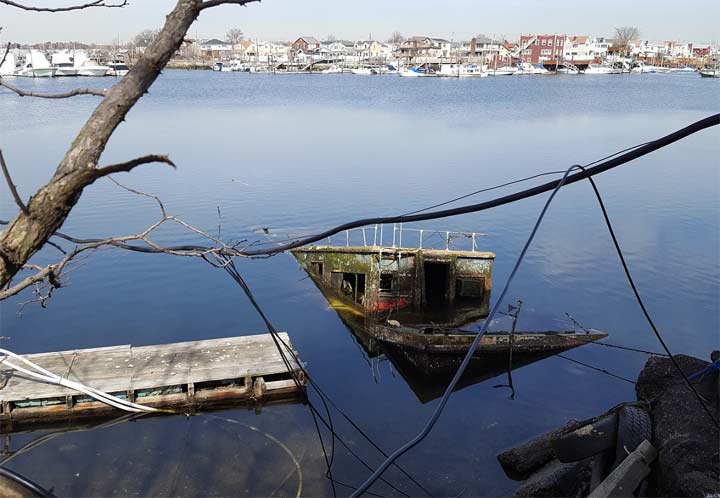 Today the facility is divided between two corporate chains: Coldstone Creamery and TGI Friday’s. Its landlord is the Queens-based Zaliv LLC. The Russian word for bay is Zaliv, not surprising considering the sizable Russian-speaking population of southern Brooklyn. Downstream from the lighthouse is the Plumb Beach peninsula that has its own curious history for having had the city’s shortest ferry service and a rent war between two competing landlords. 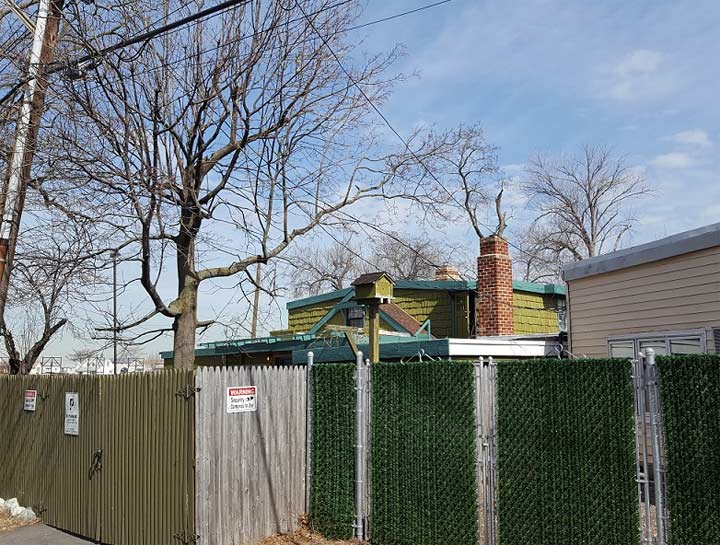 Across Harkness Avenue are Plumb 1st through 3rd Streets, a miniature street grid sandwiched between Knapp Avenue and Shellbank Creek. On Plumb 3rd are two houses surrounded by tall fences, with cameras, “no trespassing” sings, and guard dogs barking. According to property records, one of the homes is owned by Sarah B. Jordan. It is a remnant of the family’s once-larger holdings in this area. 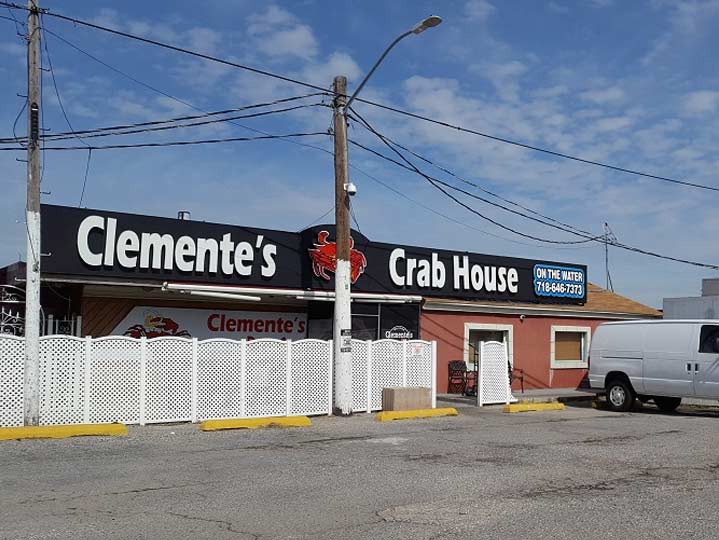 While visiting the lighthouse, I also stopped by the stub of Emmons Avenue a block to its south. It contains just two addresses: Clemente’s Crab House and a marina. Belt Parkway separates this piece of Emmons Avenue from its more heavily traveled segment. Further east are Plumb Beach and Dead Horse Bay. 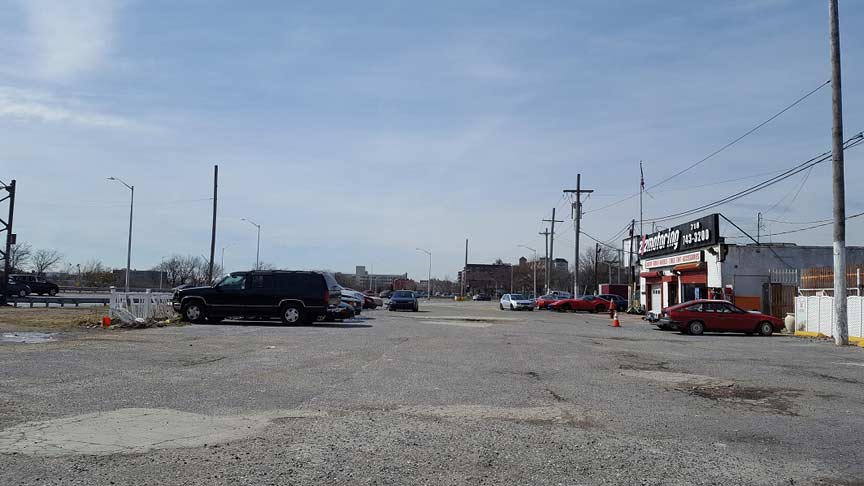 Above is the stub of Emmons Avenue accessible from Plumb 3rd Street north of the Belt Parkway.

Over the past 30 years the lighthouse has changed its colors from white to stripes to its present red cover. It stands prominent in contrast to the fisherman who is surrounded by dumpsters in the parking lot.

“Comment…as you see fit.” Comments are once again open on FNY!

Strange but true: this post has an Arizona connection. Governor Doug Ducey was a Coldstone CEO before he became our governor (click this link):

Wasn’t there a lighthouse-shaped structure of some sort on top of a building uptown above the West Side Highway? Always thought it had some sort of connection to a charitable group.