On the windswept block of West 24th Street between Surf Avenue and the Riegelmann Boardwalk in Coney Island stands the Parks Department’s Coney Island Garage and Dispatcher’s Office. The building appears worn from decades of battering by storms but its thick concrete walls give it the look of something military. It is used for storage of materials related to the beach, such as lifeguard chairs, trash receptacles, and patrol vehicles. On the northern wall of the building is a barely discernible fading mural ad for McLochlin’s Baths. 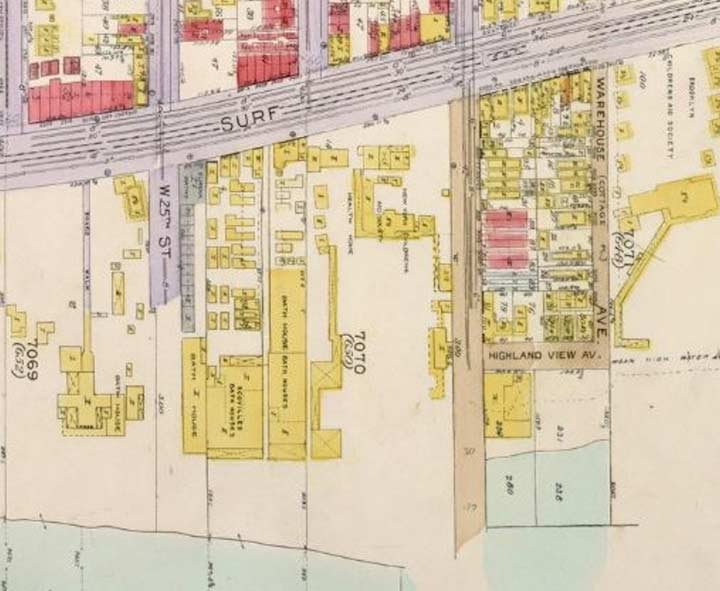 Prior to Robert Moses’ wholesale condemnation of Coney Island properties as part of his public housing push, the coastline between Steeplechase Park and Sea Gate was packed with competing bathhouses that offered swimming competitions, late hours, salt water, fresh water, cold water, and warm water options. On the 1920 Belcher-Hyde atlas, the Boardwalk has yet to appear. Its construction would begin in the following year. Along with wooden bathhouses, one can also see the Norton’s Point Trolley on the map, and the one-block Highland View Avenue. 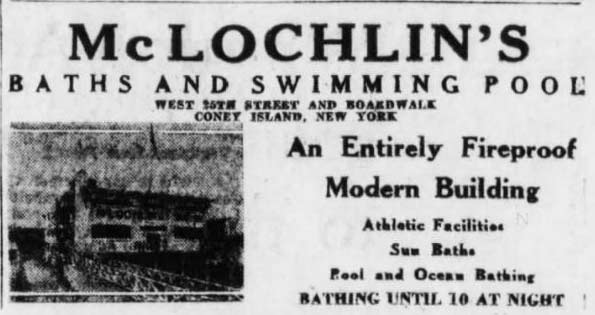 As Coney Island kept suffering fires that leveled the legendary Dreamland and Luna parks, builders of the bathhouses took pride in constructing “fireproof” facilities. This explains the thick concrete walls of the Coney Island Garage. Advertisements in the Brooklyn Daily Eagle from 1932 and 1944 highlight its amenities. 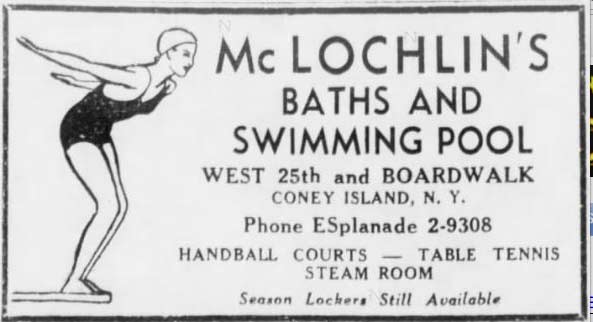 The city took title to the property in 1945, assigning it to Parks nine years later. Bungalows on the lot were demolished; a portion of the site developed as Poseidon Playground, the rest cleared for parking. With the Cold War stoking fears of air raids, a fallout shelter sign was placed at the building’s entrance in the 1950s, and still hangs there today. 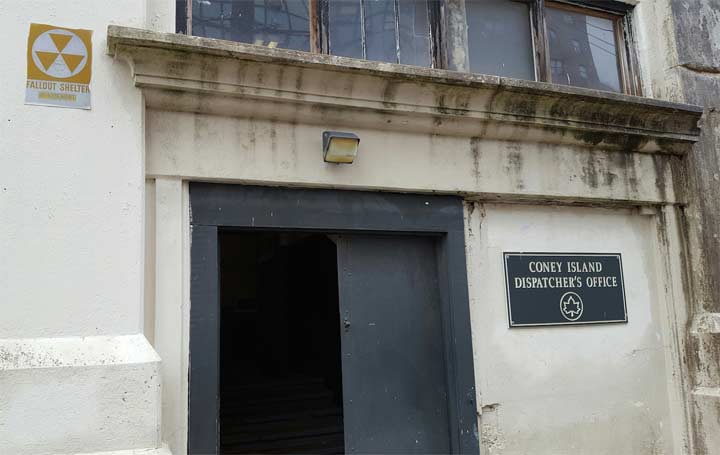 At the end of the block is a small sitting area by the boardwalk ramp. Here, West 25th Street does something unusual, in the words of The Drifters, it dips “Under the Boardwalk.” Until the last decade of the 20th century, it was possible for beachgoers to get shade and steal a kiss under its planks, but as sea levels are rising and storm surges spilled inland beyond the beach, the city turned the elevated boardwalk into a berm, filling the space underneath with sand. West 25th Street was allowed to remain as it was in order for Parks vehicles at the garage to access the beach. 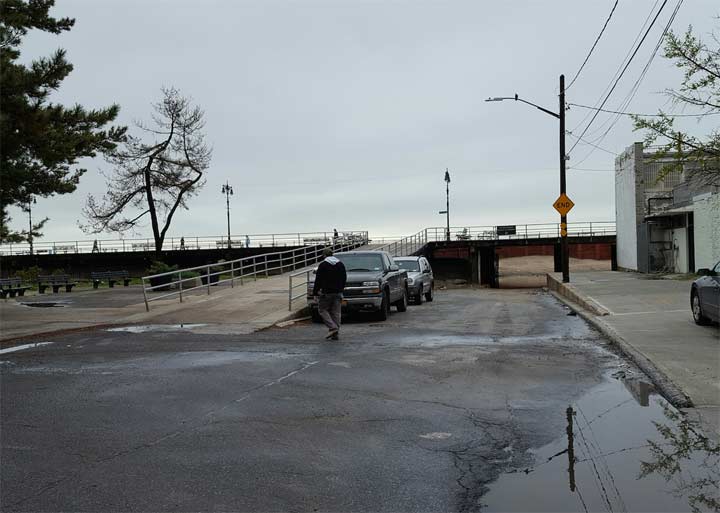 The sitting area is named after Nettie Tannenbaum Auletta. As a Parkie, I made it my mission to explain the names of every park space in the city, down to the smallest Greenstreet triangle and sitting area. The namesake here was bestowed on the site in 1985 by Commissioner Henry J. Stern, honoring the wife of Pat V. Auletta. This local couple ran a popular sports equipment shop and founded the Coney Island Sports League. Pat was also a member of the local community board and manager of the nearby Abe Stark Skating Rink. Pat and Nettie were both born in Coney Island, married on this street, and never left the neighborhood. His name appears on the map at the Pat Auletta Steeplechase Pier, given the name a year after his death in 1991. 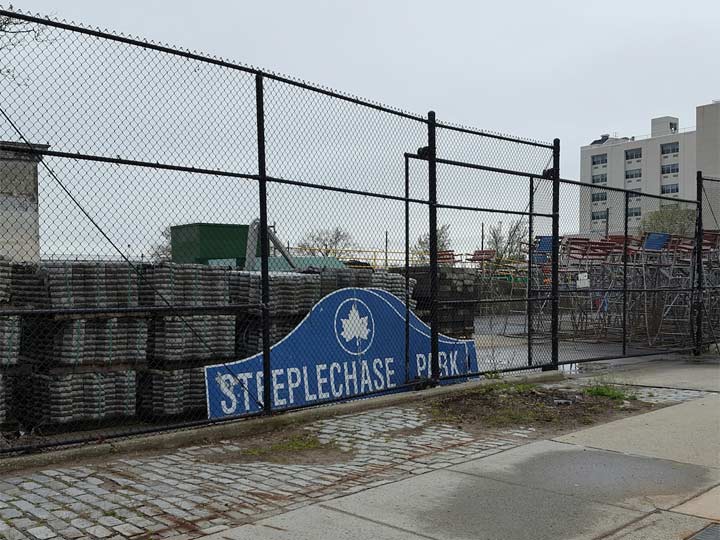 Once an amusement park and presently the home of the Brooklyn Cyclones minor league baseball team, between 1966 and 2000 is was the site of a failed Fred Trump development and sat as an empty lot used for special events. In that three-decade span, a Parks sign dutifully kept the name Steeplechase visible. Today, that sign rests in the garage’s parking lot. Since its opening in 2001, the stadium at that site went through two corporate names: Keyspan Park, and since 2010 as MCU Park in an 11-year deal. If it were up to me, that stadium would be called Steeplechase… and Citi Field would still honor William Shea…. but I digress. 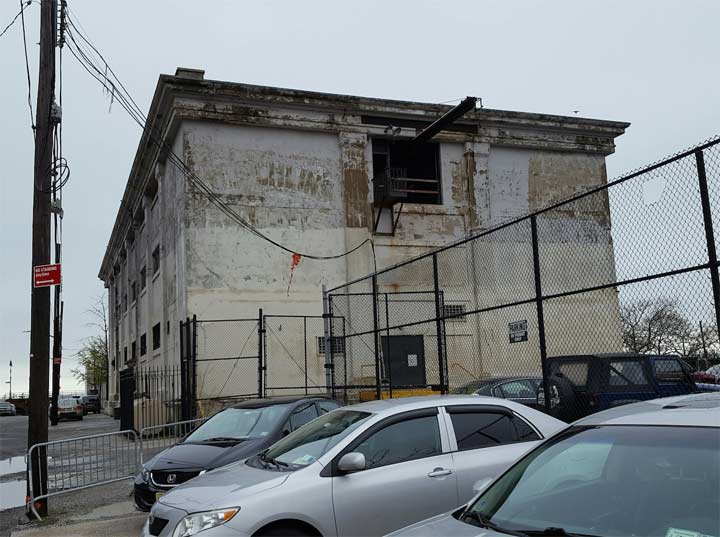 Looking back at McLochlin’s Baths, I can imagine the Garage given a new life as a bathhouse and beer garden serving the latest in gentrified locally sourced craft beer. But I also recognize that not all Parks spaces can be public. Equipment needs to be stored somewhere, vehicles need to be repaired, and where workers can park their cars. So for now, the concrete building on West 25th Street appears utilitarian with only a fading mural ad hinting to its fun-loving past.

For more on fading mural ads across the city, visit Frank Jump’s Fading Ad Campaign. He’s the authority on this topic.

OUT WITH THE OLD K

FNY IN THE DAILY NEWS

Damn they destroyed Coney Island..home of The Warriors.

Warriors, come out and playyyy!

” Until the last decade of the 20th century, it was possible for beach goers to get shade and steal a kiss under its planks, but as sea levels are rising and storm surges spilled inland beyond the beach, the city turned the elevated boardwalk into a berm, filling the space underneath with sand. ”

When I was young, my family and I escaped the brutal hot Brooklyn summers by spending a day at Coney Island. Washington Bath’s Annex was our place to cool of because it’s pool was smaller than Washington Bath’s and was a longer walk from the Stillwell Ave subway terminal.

We had a lunch under the board walk because of the shade. The hot sand was too much. I remember a lot of broken glass by the buildings underneath the boardwalk. I believe the sand berm was created probably because of muggings and was a quick getaway for thieves.

I also remember Highland View Ave. My father once told me as a kid, he used to cool off at Washington Bath’s Annex pool. On day a building across the street caught fire. That’s probably why the lot was vacant for so many years. Also remember Silver’s Baths that had a small mini school bus parked. probably shuttle bathers from Stillwell terminal.

My father took us to Washington Baths in the 1960s, where I was 1st treated to the oh-so-alluring sight of naked octogenarians with their 3rd trimester bellies &, uh, “punching bags” just below, swinging freely to & fro in the “shvitz” (steam) room. I actually developed a fear of steamed-up bathrooms because of this, fearing one of these creatures would emerge from the mist.

But another bathhouse memory comes to mind – & from one we never even went to: Stauch’s Baths, located just East of Stilwell Avenue between Bowery & the Boardwalk.

In the early to mid 70s as young teenagers, we loved to go on the Tornado rollercoaster – & not just for the ride.

You see, as we ascended to the top of the 1st hill, the sunroof of Stauch’ s Baths came into view – replete with all it’s nude senior sunbathers, adorned with those black twin plastic “spoons” shielding their eyes.

As we flew around the curves, we caught brief glances of this visual delight from different angles, never failing to crack us up.

Now imagine if Google Maps satellite view were available back then…

Minor typo – at beginning of the article it says 24th instead of 25th Street.