OUT WITH THE OLD K

The fifth bridge to cross the noxious and noisome Newtown Creek between the unglamorous neighborhoods of Greenpoint and Blissville opens to traffic as the rickety bucket of bolts known as the Kosciuszko Bridge closes today, April 27, 2017, and its namesake cable-stayed span will open to traffic. 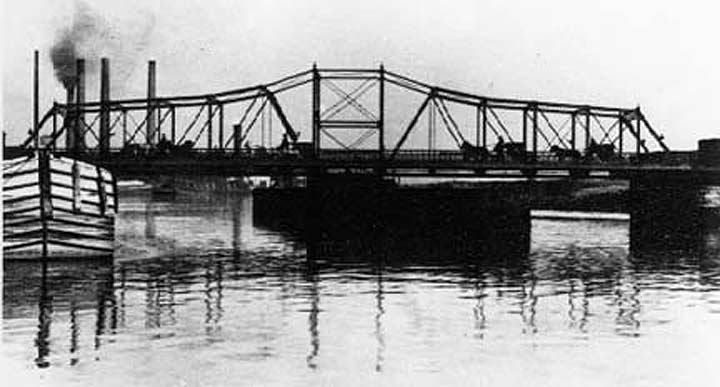 The K, as I call it, has had four separate predecessors on the Creek. The crossing that connects Meeker Avenue in Greenpoint and the junction of Review Avenue and Laurel Hill Boulevard (called Shell Road for its pavement in the colonial era and afterward) at the eastern gate of Calvary Cemetery actually predates the majority of the hallowed ground. A pair of wooden bridges, the first built on wood pilings, and the second, built on stone piers, appeared circa 1815 and 1836 respectively. The 1836 bridge had a toll collector who took one penny for each crossing, like Charon in the Greek myths who accepted one coin for a passage over Styx to Hades, and the officially-known Meeker Avenue Bridge was called Penny Bridge.

In 1894 the iron swing bridge pictured above opened for service. An island was constructed mid-Creek and when ship traffic needed to navigate the Creek the bridge was swiveled around so it was parallel to the creekbank, creating two narrow channels. This limited the size of vessels that could pass. In the early 20th Century the areas on either side of the Creek were still heavily industrialized, with metals processing and rendering plants that made the air and water an olfactory nightmare, and there was a need to completely open the Creek to allow larger boats. 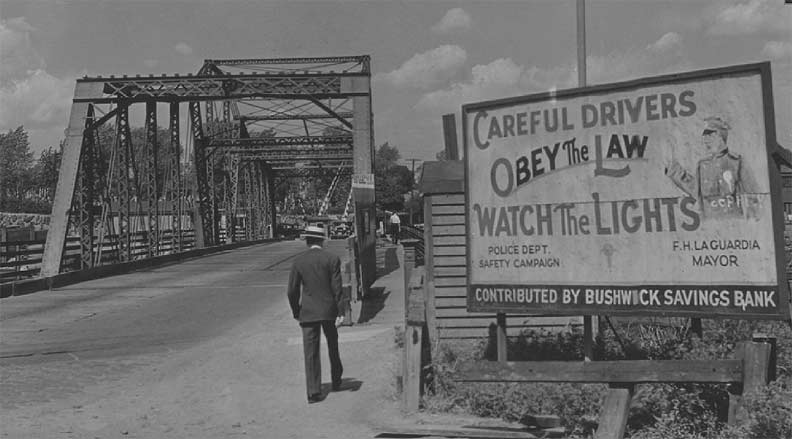 Meeker Avenue (Penny) Bridge from the Meeker Avenue end shortly before it closed in 1939. Both the 1836 and 1894 Penny Bridges were the sites of hundreds of funeral processions to Calvary Cemetery, which was opened by the Catholic Church in 1848, incorporating the ancient Alsop Family Cemetery near the western gate. Pedestrians were also easily able to cross the Creek here. 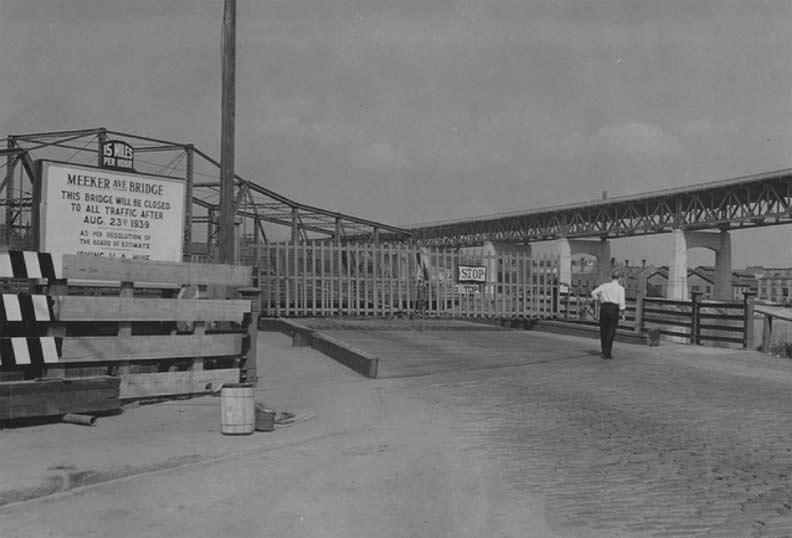 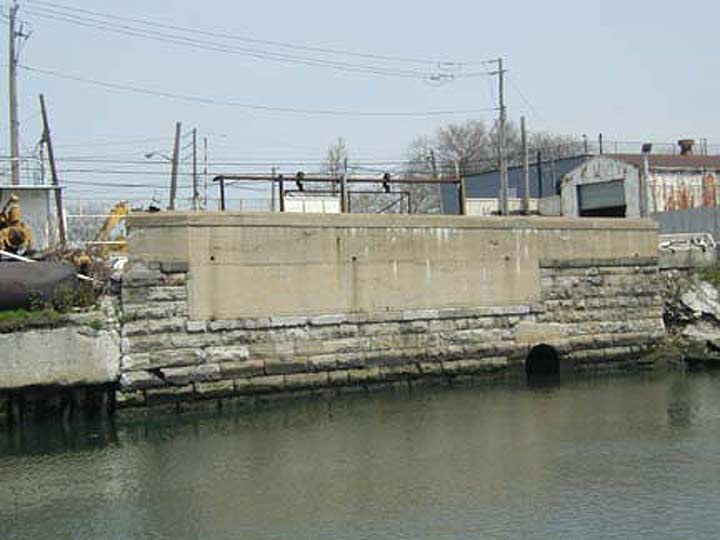 Abutments on either side of Newtown Creek are the only remnants of the iron Penny Bridge. 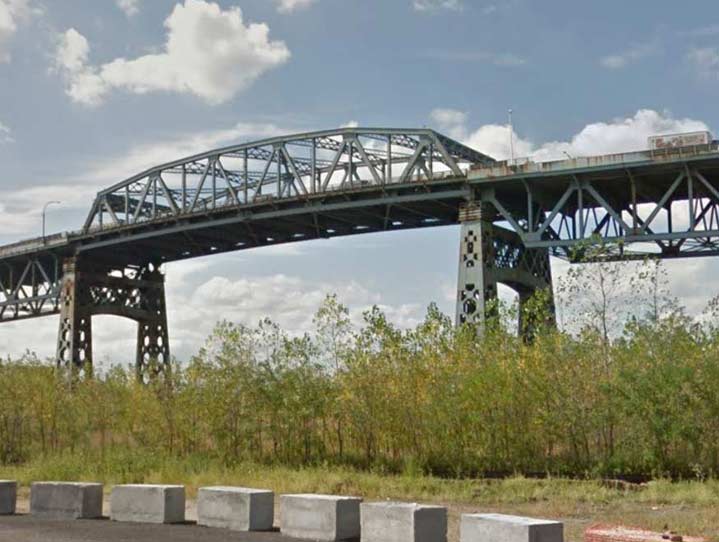 The new Meeker Avenue Bridge, one of the first legs of NYC Traffic Czar Robert Moses’ Brooklyn-Queens Expressway project that would be constructed between 1935 and 1964, opened on 8/23/1939 and was renamed the Tadeusz Kościuszko Bridge for the Polish general who aided George Washington during the American Revolution on 9/22/1940; a large Polish population in Greenpoint and Maspeth, Queens had already been well-established. In 1940, Poland was occupied by Nazi Germany.

The K bridge was partially engineered by John Kelly, who constructed it with innovations such as the cofferdam, a structure enabling workers to construct underwater bridge piers in dry conditions, and also a cutting torch that would work underwater.

Originally, the K had sidewalks enabling pedestrians to use it, despite its size, but they were abandoned and closed fairly early on. 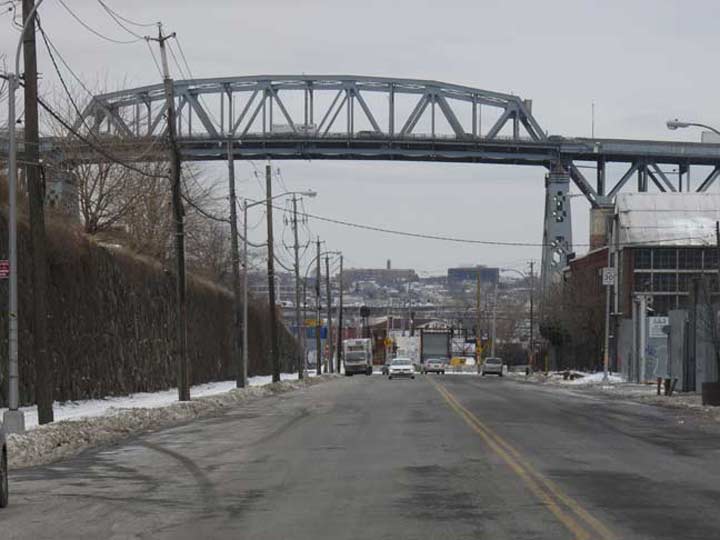 This dramatic view of the Old K from Review Avenue in Blissville will not be available after mid-2017. 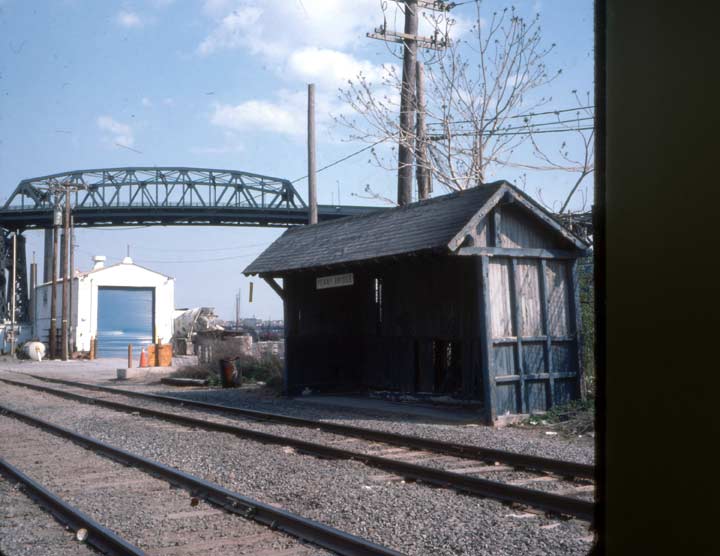 Though Penny Bridge was demolished in 1939, a minor Long Island Rail Road passenger stop that serviced Calvary visitors on the Queens side remained in service until 1998. In its later days even this small wood shed was taken down. The station averaged one or two patrons daily before its closure. 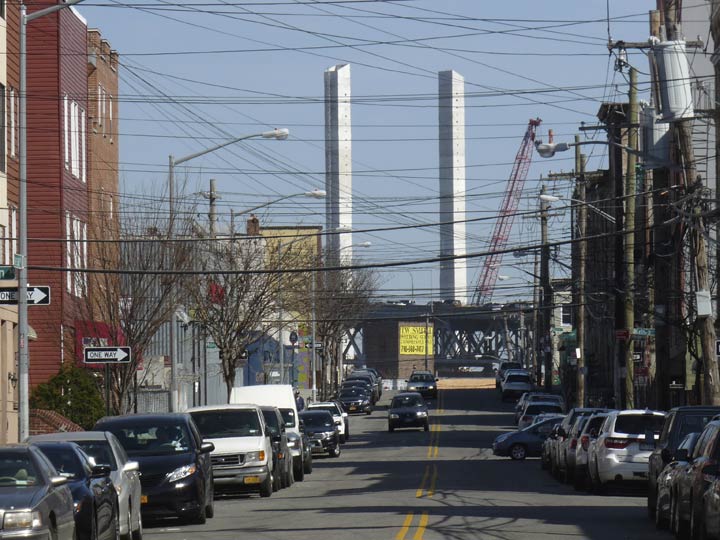 In 2014 it was announced that the Kosciuszko Bridge replacement would be a pair of cable-stayed bridges, a relatively affordable style of bridge that had become the go-to design of choice when building large new traffic bridges; notably, Boston spanned the Charles with the Leonard Zakim Memorial Bridge in the early 2000s. By contrast NYC had built no major traffic bridges since 1964 (Verrazano-Narrows) and only two small cable-stayed pedestrian bridges had been constructed to date.

By late 2015, towers of the first cable-stayed span were visible looking east on Nassau Avenue in Greenpoint.

This NY Times article by David Dunlap, written for the bridge opening, explains the engineering advantages of cable-stayed bridges and why so many major bridge are using the design. 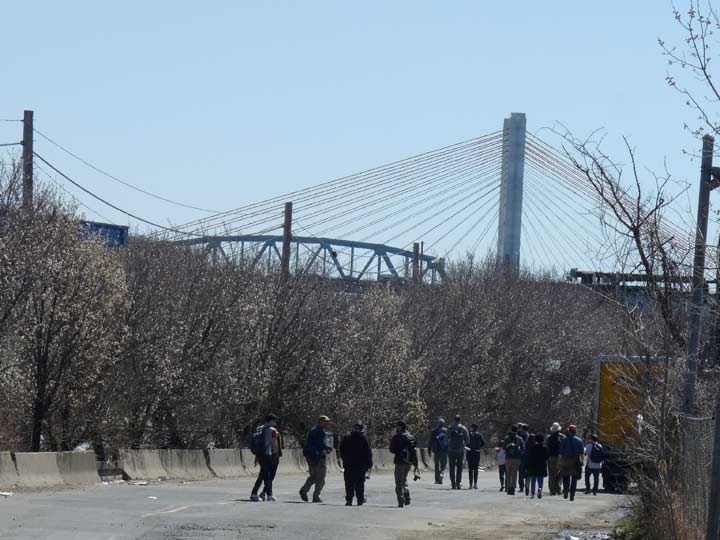 The interval of several months between the construction and demolition of the new and old K Bridges offers a unique opportunity to photograph both side by side, as seen here on Railroad Avenue on the Queens side of Newtown Creek… 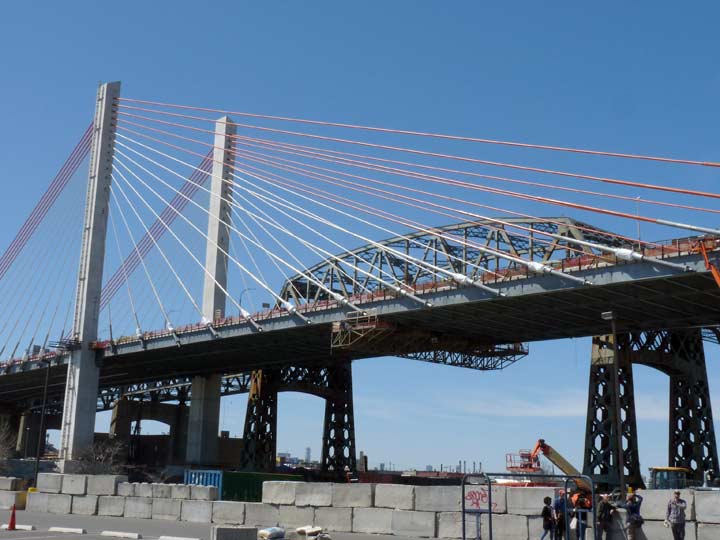 … and from 43rd Street and 56th Road in Blissville. The towers of the new K can be seen from Williamsburg, Brooklyn and Astoria, Queens. Beginning later in 2017, the old K will be demolished and the second span of the new K, with towers closer to Queens, will rise in its place. That span will include a bike and pedestrian path, but I am not yet certain what routes in Brooklyn and Queens those will connect up with. 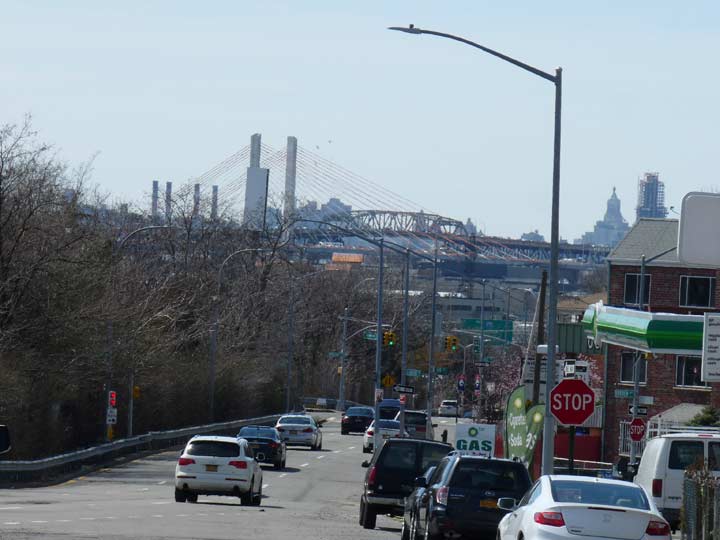 The new and old K as seen from Borden Avenue in Maspeth.

“Abutments on either side of Newtown Creek are the only remnants of the iron Penny Bridge.”

What year did this bridge close for good ?

I’m trying to picture the view of it when the old bridge is gone and the second cable stay bridge is completed. We will find out soon enough.

It still would have been nice if they could have just renovated the current bridge, and it might have costed less for that rather than just replacing it altogether.

A renovation of the 1939 span would not have been the answer. Physically, the bridge had outlived its anticipated life span. Additionally, the steep approach ramps from either the Brooklyn or Queens sides on the old bridge were a nightmare for trucks, causing them to slow significantly, and helped to create terrible traffic jams in both directions. Improved technology has allowed the actual roadway on the new span to be much lower above the water than that on the old bridge. That allows the new approach ramps to be more gentle as they rise to the lower crest of the new bridge. If you cross the new bridge when traffic is light, you almost don’t realize you are on it. With the old one, even automobile drivers had to punch the gas pedal to keep up their speed. Right now, traffic is still a challenge, as both the northbound and southbound traffic is squeezed onto one span, which will become Queens-bound only when the sister span is open. In addition to the squeeze, some of the approach ramps are a bit tortured, as they are temporary until the new southbound span is opened in the future with appropriately placed approach ramps.

The old K is still used currenty for access from the ramp of the west bound LIE to the BQE. They never built a new ramp (yet).

A really beautiful set of pictures. Now a few comments.

1. While the two pedestrian lanes – one on each side – were eventually phased out, this did not occur until the early to mid 1960’s when a major renovation of the bridge occurred. You can still see the remnants of these lanes on the truss portion of the bridge as it passes over the creek; this is why the four lane highway becomes – or, I guess, became – a three lane bottleneck at this point. I have many fond memories walking across the bridge with my mother when we visited her father’s grave in Calvary Cemetery.

2. My father told me a lot about the old Penny Bridge. One interesting story concerned the weekly visits a barge made to either deliver or retrieve goods to and from the Brooklyn Union Gas facility. The fact that the wide barge nearly scraped both sides of the bridge when it passed it clearly indicated that a more modern span was needed.

3. While the “New” bridge was being built during the depression, my dad would earn a few extra cash by selling soda to the construction workers. They would lower their pails from the bridge with a nickel and he would send up their soda of choice.

4. Finally, if anyone still wants to see an existing vision of the old K, they could travel to Montreal where the secondary span of the Jacque Cartier Bridge is actually a spitting image.

Fondly recall over-the-road truck & bus drivers talking on the CB radio about the “Kamikaze” bridge. These drivers did not attempt to pronounce the name Kosciuszko!