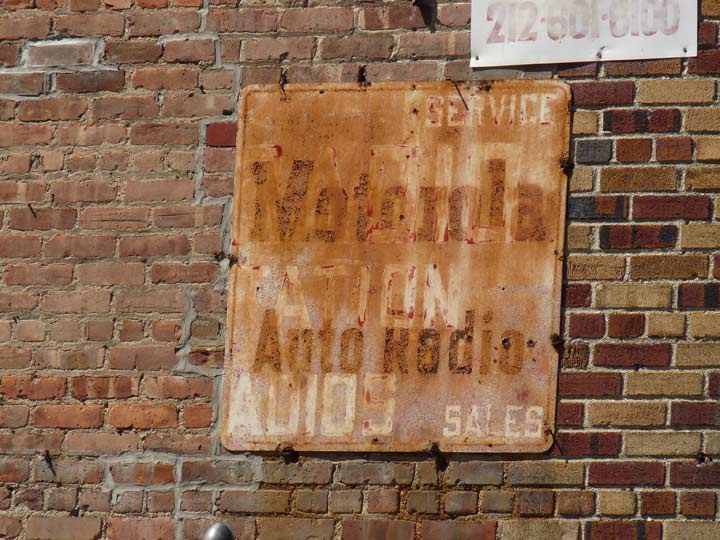 I was shuffling about on Broadway and West 262nd Street in Riverdale waiting for the Bx9 bus (a third of my life is asleep, and another third is waiting for buses or trains) when I spotted an impossibly rusted metal sign on one of the apartment buildings, a palimpsest of two ads, one of which says, “Motorola Auto Radio.” I’m an Apple enthusiast all the way, but I am aware that Motorola makes one of the most popular cellphones in 2017, the Moto family, and also developed the very first handheld mobile phone, the DynaTAC, back in 1973.

But this ad harks back to Motorola‘s very beginnings in 1928. Two brothers, Joseph and Paul Galvin, along with partner William Lear, invented the very first auto dashboard radio and installed it in a Studebaker, and the company was named for its initial innovation. Motorola went on to develop two-way radios (walkie-talkies) and then transistors, computer chips, electronics and semiconductors. In the home consumer market Motorola produced TV sets and home stereos; today, its flagship consumer item is the Moto mobile phone.

I’m trying to figure out what the other ad says. Something “Nation Autos,” maybe.

Top word, under Motorola, looks like “Radio.” Not sure about the bottom word – it looks like “adios,” but I’m in California, so heavily influenced by Spanish 🙂 A closer look makes it seem like “A0105,” but don’t know what that would be. Model number? Radio frequency?