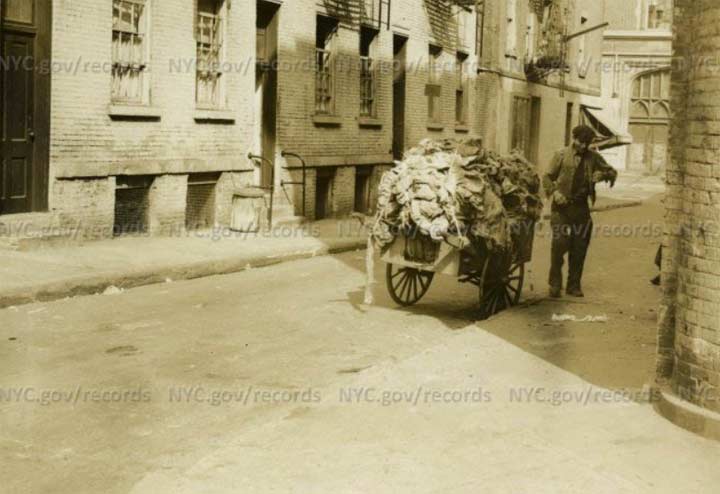 From the NYC Municipal Archives comes this image of a Depression-era ragpicker making his way along Batavia Street at New Chambers Street just north of the Brooklyn Bridge. If that address sounds unfamiliar, no worries — it hasn’t existed for over 60 years. 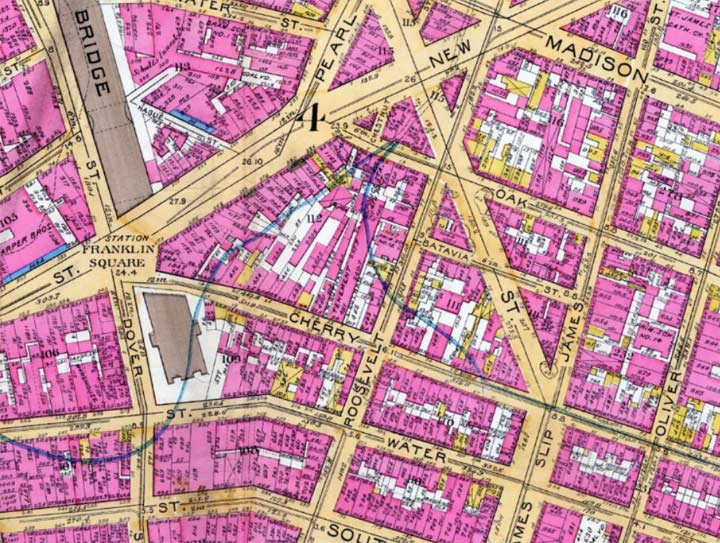 Here’s a map from 1890 showing the network of Manhattan streets north of the Brooklyn Bridge. Virtually none of these streets exist today; Pearl Street, at the upper left edge, remains, as does Madison, at the upper right edge. South Street is still there, running under the East River Drive. However, Batavia, New Chambers, Roosevelt, and Oak have all been eliminated and Cherry, James and Oliver drastically cut back.

They were victims to mid-century urban renewal, in which streets teeming with tenements were torn down to be replaced with the Le Corbusian ideal of “towers in a park.” Nearly a dozen such projects claimed tenements, and the streets where they were located, in the mid-20th Century. The Al Smith Houses was one such project, and it was built in 1953. Its current boundaries are Madison Street, Catherine Street, St, James Place (formerly New Bowery) and Robert Wagner Senior Place.

The project was named for three-time NYS Governor Alfred J. Smith (1873-1944), who was born and raised on the Lower East Side. Known as “The Happy Warrior,” he worked in the Fulton Fish Market and later a pump factory. He was elected assemblyman at age 30 and later became Speaker. “The working man’s friend”, he championed the Workmen’s Compensation Law, banning corporate campaign contributions, and supported women’s right to vote.

He was defeated in 1928 for the Presidency against Herbert Hoover, suffering through a grueling campaign in which he suffered countless attacks, especially in the South, for his Roman Catholicism. Despite his staunch Democratic Party membership, he opposed Franklin Roosevelt’s New Deal and supported Roosevelt’s Republican opponents in the elections of 1936 and 1940.

The genesis of Batavia Street’s name is a puzzlement. It likely refers to the Roman name for the Netherlands; the Dutch were the first Europeans to settle what would become New York. There is also an upstate Batavia, New York, in Genesee County.

Considering the Great Depression would have happened on his watch, Al Smith was lucky to have lost.
Batavia was the Dutch colonial name for Jakarta, which today is an immense modern city.

Batavia was also the colonial-era name for modern-day Jakarta. It would seem that the Dutch used it as some sort of “poetic” name, not unlike the British using “Britannia.” Just why it would be in that neighborhood, instead of closer to South Ferry in the “oude dorp” (south of Wall Street), might have to do with a possible post-Revolutionary commemoration of NYC’s “Knickerbocker” heritage (see: e.g., Cortlandt Street, Gansevoort Street, Coenties Slip, Beekman Street, Corlear’s Hook)

Very interesting I was born at 21 Batavia st.

My great grandfather’s family lived, according to the 1870 federal census, lived at #73 New Chambers, between Batavia and Oak Streets. I found this map to be very helpful. Thank you.

Italian great grandmother was living at 1 Batavia street in 1893 when she married. This article was a great find! Thank you.