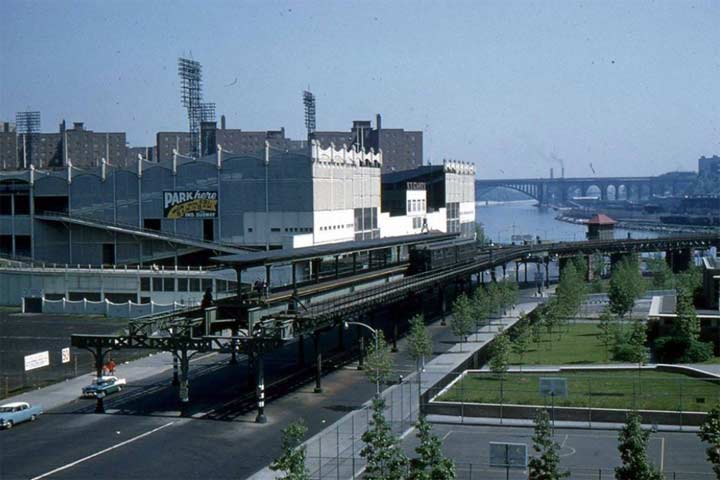 Virtually nothing today is as it was in 1957 in this photo taken from the 155th Street Viaduct looking north on 8th Avenue toward the Harlem River. In the foreground we see the last remnant of the 9th Avenue El. Most of the rest of the el had closed by 1942 with the exception of this small section. Beginning in the 1860s, the el had rumbled up Greenwich Street, 9th Avenue, West 110th, and 8th Avenue, crossing the Harlem River with two station stops in the Bronx at Sedgwick and Jerome-Anderson Avenues before merging with the Woodlawn-bound el at River Avenue just north of Yankee Stadium, actually entering a tunnel briefly because of Bronx topography.

That short stub of an el survived to bring National League fans to the Polo Grounds, seen behind the el. It was the last in a series of ballparks and athletic grounds named for the Sport of Kings, which was actually played here at one time. The last Polo Grounds, constructed in 1911, was home to the New York Baseball Giants until 1957 and to the New York Yankees in the 1910s and 1920s before, of course, the first Yankee Stadium opened in 1923. When the Giants moved to San Francisco in 1958 the Amazing Mets took over the joint, losing an incredible number of games here during the 1962 and 1963 seasons until Shea Stadium in Queens was finished (the Mets have played in three boroughs, the Yankees four, with only Staten Island excepted).

The el stub, though, was razed after the 1957 season. There had been a free transfer from the IND 155th Street Station, which served the Polo Grounds and Yankee Stadium from two consecutive stops (155th and 161st).

In the early 1960s the Polo Grounds Houses rose to take the place of the ballpark, and 8th Avenue was renamed Frederick Douglass Boulevard in the 1980s.

“The Mets and Yankees have each played in three boroughs, with only Brooklyn and Staten Island excepted.”

The difference is that the Yankees have played HOME games in the three boros while the Mets have never played a home game in any boro outside Queens.

The Yankees played in Hilltop Park in Manhattan in the early 1900’s and then shared the Polo Grounds with the Giants until Yankee Stadium opened in 1923. They played home games at Shea Stadium in Queens in 1974-1975 while Yankee Stadium was being remodeled and again briefly in 1998 when Yankee Stadium had some structural issues.

To my knowledge, the Mets have never played any home games in the Bronx.

Mets played their home games at the Polo Grounds in 1962 and 1963, prior to Shea Stadium. And counting inter-league games against the Yankees they have also played real games in The Bronx, but as the visiting team.

“the Mets have never played a home game in any boro outside Queens.”

The Mets played their home games in Manhattan in 1962-3.

The sad part of this photo is that there is an ad outside the Polo Grounds for parking during Yankee games.

What is so sad about the Polo Grounds lot being used for Yankee Stadium patrons? The Giants and Yankees never shared home game dates, so the Giants were always on the road when the Yankees played at home. The otherwise empty parking was a revenue producer for the Giants, who were suffered from poor attendance during the last few years at the Polo Grounds. Aside from games against the Dodgers, the Giants typically drew under 10,000 fans per game in a stadium with 54,000 seats. That’s the major reason they moved to San Francisco for the 1958 season.

Hard to believe it’s been 60 years, and I remember when the Giants moved. I was a Yankee fan even in those days and remain so, cemented by marrying a girl from The Bronx. But I always had a soft spot for the Giants, because the Dodgers were the team I disliked intensely. And who could forget Willie Mays patrolling the vast Polo Grounds outfield?

Rucker Park on the right had opened only about a year earlier, though it didn’t get its present name until years later after Holcombe Rucker’s death. I’m not sure what it was called as of the photo’s date as the NYC Parks site isn’t helpful.

Remember this scene well. I witnessed Giants and Mets games at the Polo Grounds in my young days.

A few additional pieces of information and history:

1. This stub was known as the Polo Grounds Shuttle in the 1950s. While it’s true that the Giants baseball team playing 77 games a season at the PG was the main reason the el stub was retained, there were two other reasons as well. The NY Central RR Putnam Division trains ran until May 1958 and terminated at Sedgwick Avenue, adjacent to the IRT Sedgwick Station. Bronx customers from it and the Jerome-Anderson Station took advantage of the free transfer to the IND D train at 155th Street for travel to and from points to the south. Prior to June 1940, these stations had through service below 155th Street on the 6th and 9th Avenue Els.

2. The Polo Grounds Shuttle ran its last train on August 31, 1958. By then the Giants had departed to San Francisco, and the NY Central Putnam trains had stopped running. The structure was razed soon afterward, including the bridge across the Harlem River. To this day, the turnoff from the IRT #4 Line is visible below the main tracks adjacent to the new Yankee Stadium. In fact, the old el route would go right through center field in the new stadium.

3. The 9th Avenue El originally terminated at 155th Street, beginning about 1880. The extension across the Harlem River opened in 1918, using the swing bridge originally built for the New York and Northern RR, a predecessor of the NY Central Putnam Division. The IRT Sedgwick and Jerome-Anderson Stations, and the connection to the Jerome Avenue Line, are all part of the IRT Dual Contracts Bronx routes opened 1917-1920. More information is found on this link: https://www.nycsubway.org/wiki/The_9th_Avenue_Elevated-Polo_Grounds_Shuttle.

Amazing that 155th Street was the 9th Ave El’s northern terminus in 1879, and then became its southern terminus by the 1950s. So many major components of NYC’s transit system have been ripped out over the years. I can only imagine what that must have meant to people who grew up in NYC in the 1910s-1950s, seeing those lines you rode every day just disappear. As noisy as they were, I think NYC lost a bit of its character when the El system was torn down in Manhattan.

There was definitely something different about the Els compared to the Subway in terms of a certain romantic character. To the point that when Sam Raimi wanted to include one in his Spider-Man 2, they actually filmed in Chicago just to have an El (or in that case, an “L”), despite the fact that there hasn’t been an El in Manhattan since before the character debuted in comics.

That said, the replacement of he Manhattan Els by IND Subway lines does represent an improvement in capacity as well as the usual cited reasons regarding the noise and darkening effects of the Els at street level that are off cited. After all, a full four track subway that has platforms that can handle ten cars is definitely higher capacity than an El with three tracks and only five cars per train.