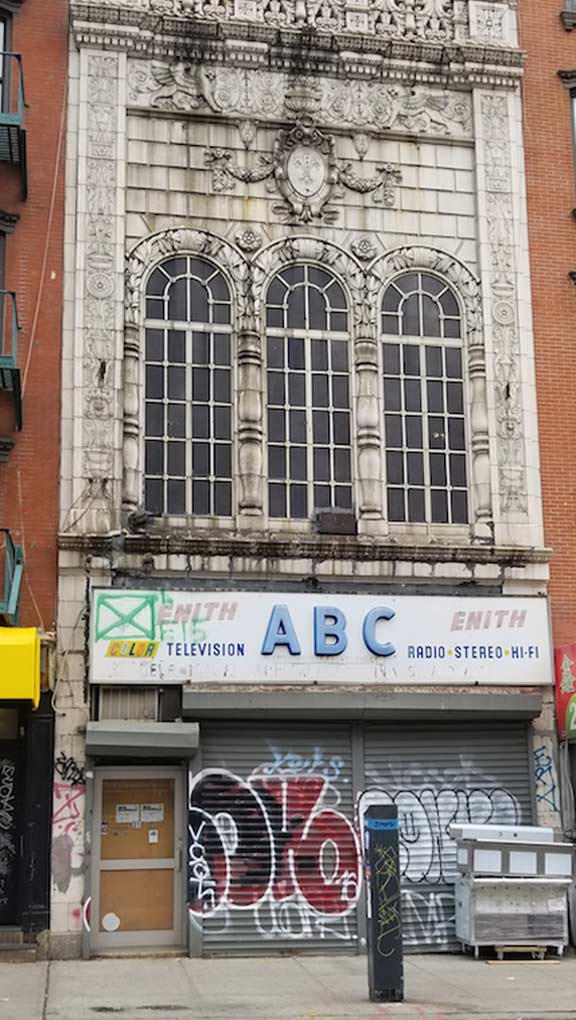 As I often do, I come across material for FNY by happenstance.  I had just exited the Manhattan Bridge, upper level, made a right on Canal Street to get a picture for an upcoming entry that you’ll be seeing soon..  The Zenith sign caught my eye initially as I was crossing Canal Street, about to make a  left turn onto Essex Street.  It wasn’t until I got home when I noticed how ornately the  building where the sign  was had been designed.  Upon research, I discovered the building was formerly the Loew’s Canal Street Theater.  According to cinematreasures.org, the theater opened in September, 1927 and seated 2279 theatergoers.  It operated  as a theater until the 1960s or 1970s.

ABC was a store that apparently exclusively  sold Zenith electronic products.  During its heyday, Zenith was a revered name in the electronics industry, especially its televisions.  How many of you older FNY fans remember its logo?

Zenith was started in Chicago by Ralph  Matthews and Karl Hassel.  The company’s most notable innovations were FM Stereo and the  wireless  TV remote control.  Can you even imagine watching television without a remote?  You mean you gotta get out of your chair to change a channel?  In fact, before the ubiquitous remote control, network television programmers  would  introduce a new show by putting it after an established hit show because they knew people were too lazy to get  up and change the channel.

The company did reasonably  well until the onslaught of electronic products from Asia in the 1970s.  Eventually, by 1990, the company  was taken over by LG Electronics of Korea.

The sign really dates itself.  I grew up, and many of you readers also did, during a time when black & white reigned supreme in the television  landscape.  Color television came around in the early 1950s and was  prohibitively expensive.    RCA was among the first to come out with color televisions and hit the market with a then astonishing price of close to $1000.   In addition the televisions’ high price,  there was a scarcity of color programs on television because not every program  on television was broadcast in color, including the  shows on the major networks — NBC, ABC or CBS.

However, bit by bit, color TV supplanted  black & white as the standard mode of television broadcasting.  By 1968 or so, everything on network television was in color.  It also helped that prices of color TV slowly decreased to more affordable levels.

Also Zenith was known  for manufacturing stereo hi-fi units.  Some of you might remember those  wooden console sets with the rich sound that included a phonograph and a AM/FM radio.  And if you really had the bucks, you could get a unit that also included a  color television.  Back in the 1960s, those units could set you back about $800-$900.

Who woulda thunk back in the 1950s that we would eventually be carrying around phones that can be used as a television one day?  Truly amazing.

The side of the auditorium is easy to see from Ludlow Street. I don’t know what if anything it’s used for, certainly the Zenith shop wouldn’t have occupied more than a tiny portion (probably just the former lobby).

The auditorium is currently used as a warehouse

I remember that in the small, “paperback” sized version of TV Guide that everyone had mailed to their home you would sometimes find a small “C” at the end of the program listing indicating the show was in color. How older I felt, even as a 15 year old boy, when TV Guide did away with the “C” and started using “BW” to indicate the now dwindling amount of black & white programs.

The quality goes in before the name goes on.

Zenith’s slogan when I was growing up was, quality goes in when the name goes on.

Remember those square pieces of thin plastic sheets tinted horizontally with different colors that you taped over the front of your black and white TV so that you could pretend to yourself that you were watching color TV.
They sold them in drug stores and hardware shops etc. for 98 cents.
Strictly for dumb-asses and I even knew some people who had one.
To my everlasting shame.

My parents loved Zenith TV’s. We had a few of them when I was growing up. The “Z” was in the shape of a lightning bolt.

Every Christmas Eve, WPIX would broadcast the “Yule Log” burning in a fireplace. I don’t know if the signal was in color, but we had to watch it in glorious black & white.

I recall it being in color – after we finally got a color TV.

Supposedly, they filmed the log burning in the fireplace at Gracie Mansion on year (JVL era?) and rebroadcast the same log year after year.

“Who woulda thunk back in the 1950s that we would eventually be carrying around phones that can be used as a television one day? Truly amazing.”

No joke, Dick Tracy. Not a snarky remark, I mean it– Dick Tracy, in the strips I read in the 1960’s, had a two-way TV in a wristwatch-type arrangement.

Somebody took the 2 “Z”s off the sign which will almost certainly be for sale by now in a vintage store in soho.
Oh,can anybody tell me what the real estate people tried calling soho before it was called that.
first prize for the correct answer will be a years supply of Eskimo pies or whats behind the curtain!

Wow. I often dreamed of finding a ruined old theater and offering to bring it back to glory (and converting it into a 300-seat main stage, a 100-seat black box, and a small movie house) for $1 a year lease and sweat equity with a lot of my theater friends. The Canal Street sounds like it would be ripe for a deal like that (if the city owned it).

I was just standing outside this building this morning; and wondering, gratified to find FNY indeed had an informative write-up on it! Thanks for sharing. It could just a good power-wash!

Back in the 1960s, my Dad would shlep us into Manhattan from Brooklyn in his car to buy TVs, radios, and (once for me!) a reel-to-reel tape recorder at ABC. More than Zenith appliances were sold there, although my Dad did buy a Zenith portable TV there. It was a small shop from what I could see and wasn’t set up as a showroom. You’d order an item, the clerk would bring it up front to the counter and you’d buy it. I couldn’t fathom why we made this long trip unless it was because Dad knew the owner and got a good discount. I haven’t thought about ABC in decades!