Between the outbreak of the Revolutionary War in 1775 and the evacuation of British forces eight years later, New York City was a battlefield pockmarked with forts on nearly every significant hilltop and point of land sticking into the water. Most of the fort sites have since been incorporated into parks, and many are remembered in the names of neighborhoods and streets. Among those that guarded the northern tip of Manhattan, Fort George is perhaps the least remembered. 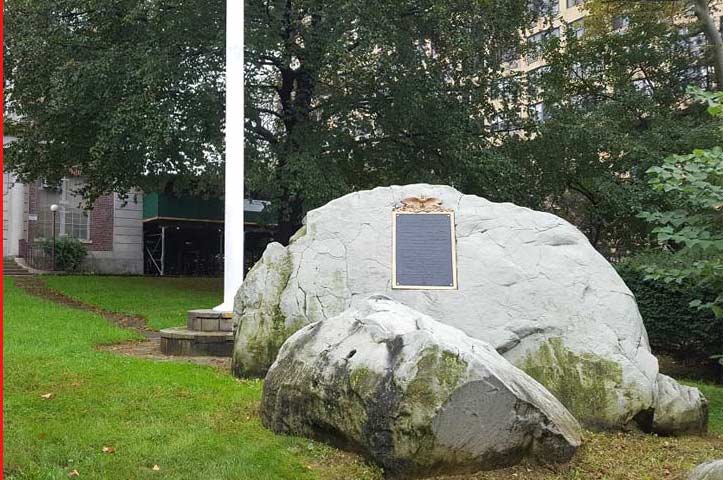 A glacial boulder with a plaque placed by the Daughters of the American Revolution pays tribute to the defenders of the 200-foot Laurel Hill, where volunteers from Bucks County, Pennsylvania led by Col. William Baxter suffered massive casualties on Nov. 16, 1776 in a futile attempt to hold back British and Hessian forces. Their action enabled Gen. George Washington to escape north to White Plains and continue the war. 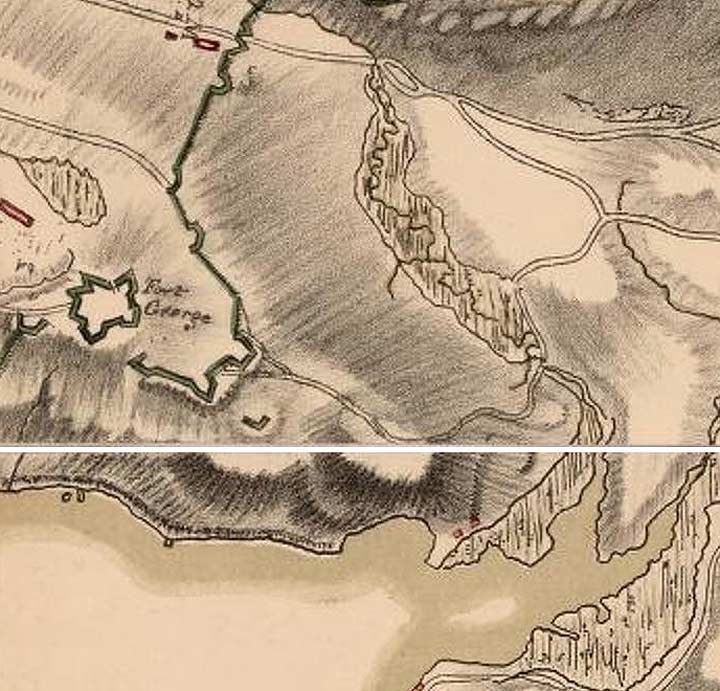 No trace of this wooden fort remains and the only clue to its shape comes from the 1782 British Headquarters Map that shows the fort as part of a defensive line stretching between the Harlem and Hudson rivers that includes Fort Tryon. The enemy landed at Sherman Creek and ascended the hill on which the fort stood. Upon capturing the fort, the Redcoats renamed it after King George III. They then marched on Fort Washington which they renamed after colonial governor William Tryon. 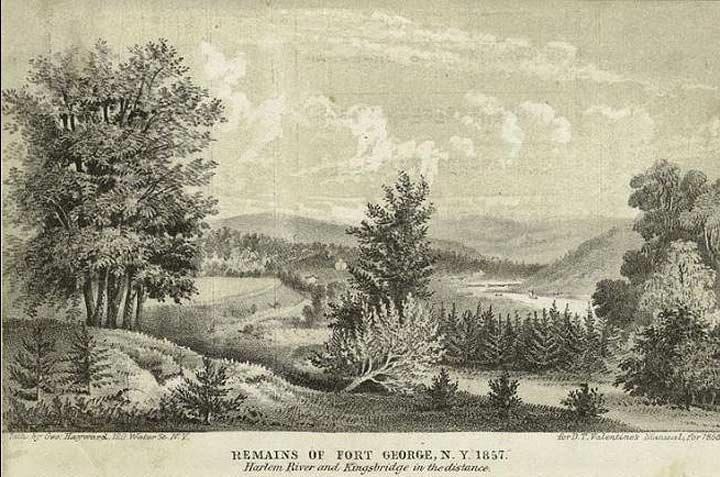 After the war this fort was abandoned and became a romantic overlook from where travelers could see towards Kingsbridge Heights and the gorge of Harlem River, as seen in an 1858 sketch by George Hayward for D. T. Valentine’s Manual, a popular guide to the city.

The northern tip of Manhattan is known for its cartographic anomalies, such as the orphaned piece of Tenth Avenue running between Dyckman and W. 218th Streets. It is separated from the main stretch of Tenth Avenue by the steep slope of Fort George Hill. In 1890, the section north of 59th Street was renamed Amsterdam Avenue, but the orphaned segment retained its number. In 1887, anticipating the northward march of urbanization, engineer William Barclay Parsons envisioned a sloping viaduct for Amsterdam Avenue that would have spanned Dyckman Street and Sherman Creek. It would have riled the Manhattanville Viaduct of Riverside Drive as an engineering marvel had it been built. 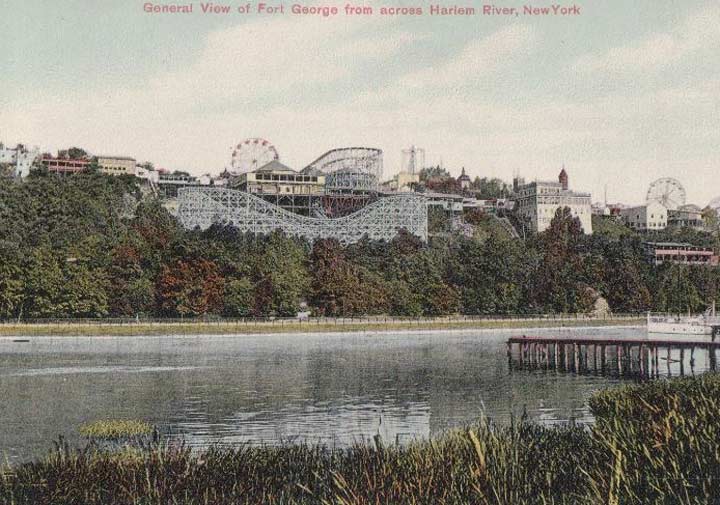 As this hilltop was a popular destination, in 1905 it opened as Manhattan’s counterpart to Coney Island with roller coasters and ferris wheels that hugged the edges of the cliff, enhancing the feeling of suspense. But as the area became more developed, the neighbors grew to resent the sideshows, noise and crowds of the amusement district. The nearby woods made for excellent hideouts for pickpockets. In 1911 an arsonist set fire to Fort George Amusement Park. Another fire occurred in 1913 causing $100,000 worth of damage. Social worker Lillian Wald, who chaired the Parks and Playground Association lobbied the city to acquire the site for a park. While the hilltop remained vacant, the slope was annexed to Highbridge Park, which runs south to 155th Street on the cliff that faces Harlem River. 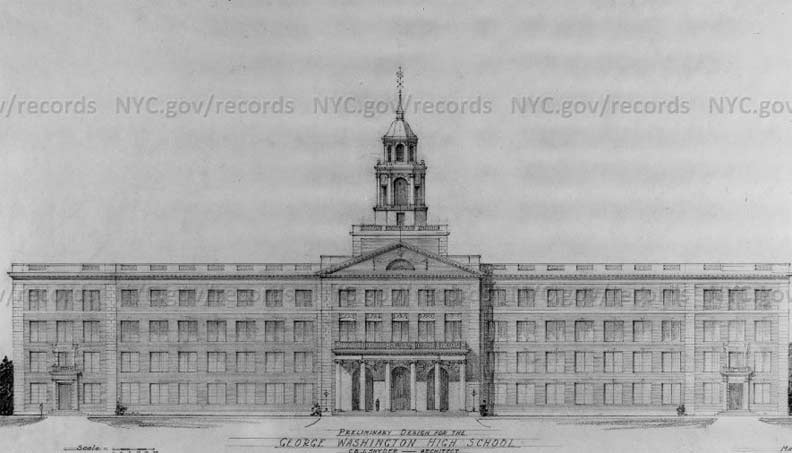 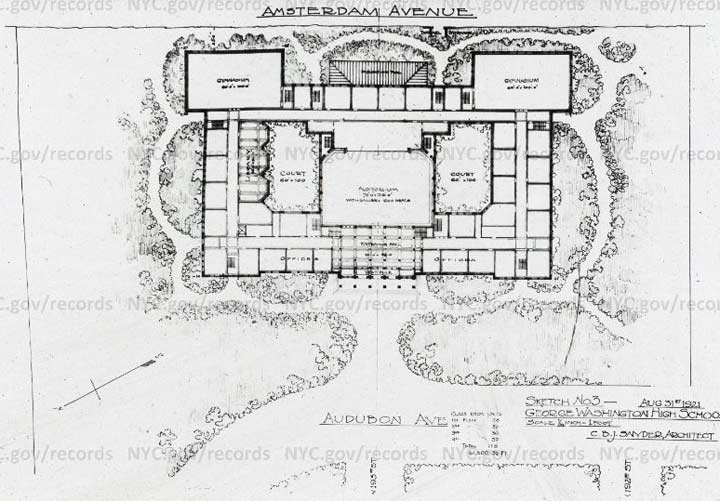 In 1921 prolific public school architect CBJ Snyder proposed the palatial George Washington High School for the hilltop. Images of his plans can be found at the city Department of Records. The $3.5 million facility opened on Feb. 23, 1925. In the 1,500-seat auditorium, the boys marched in the uniforms of the Continental Army while the girls arrived in gowns and hoop skirts to the tune of Mendelssohn’s Festival March. 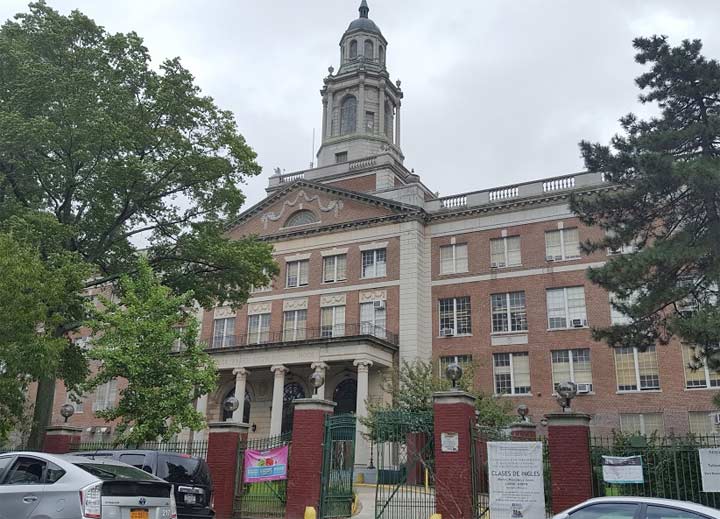 Inside the school is a 1938 public works mural by Lucienne Bloch, The Evolution of Music. It’s unfortunate that the public cannot see such great artworks unless they’re students, parents, or members of the faculty. Thankfully Living New Deal was there and has the story and photos. The NYC Public Design Commission also shared its photos of the mural in progress. Notice how the mural has people of different races at a time when much of the country was ruled by Jim Crow laws. New York is a forward-thinking state! 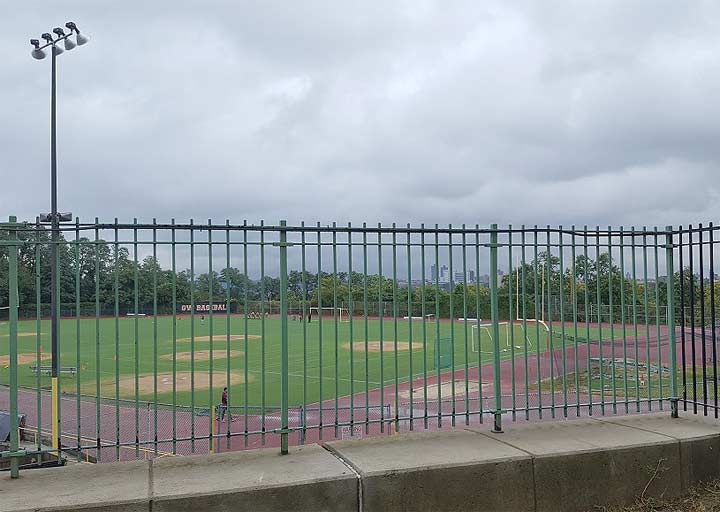 From its football field, the view enjoyed by George Hayworth is still there, obscured partially by trees and urban development. 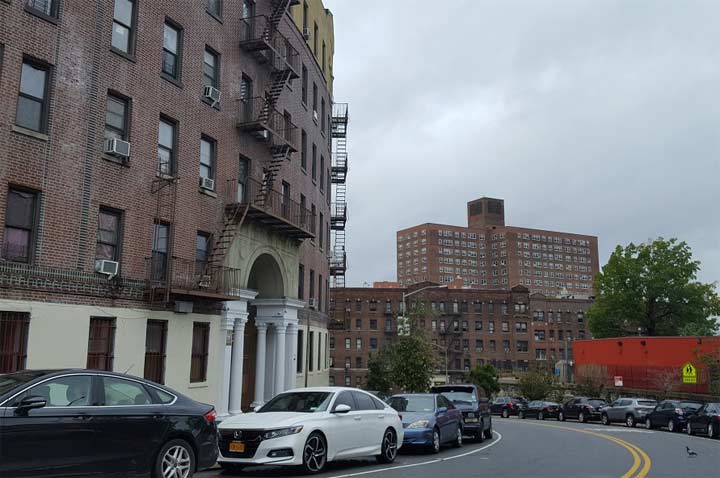 Kevin Walsh often writes about the curved apartment buildings of the Bronx and upper Manhattan has many features of its northern neighbor: stepped streets, elevated subway, and a building with curves at the northern tip of Audubon Avenue across from the high school. 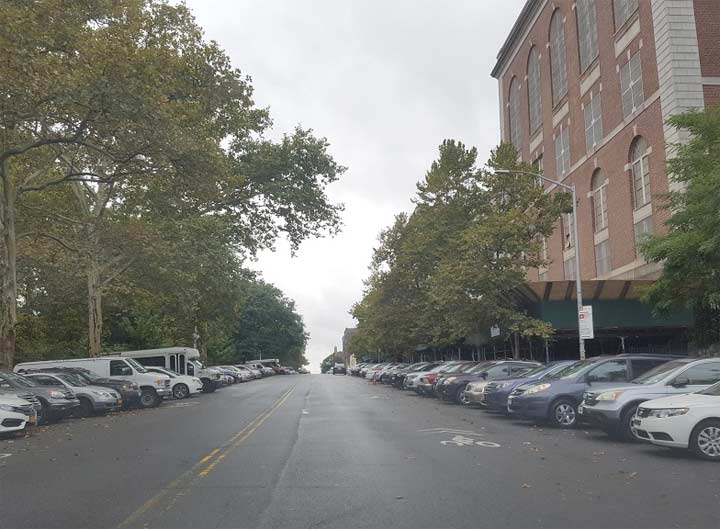 On the back side of the high school, Amsterdam Avenue has its northern tip. Looking south it is a straight uninterrupted view towards its opposite end at 13th Street. Walking south, you can refer to Kevin’s 2014 photo essay to learn about the uptown campus of Yeshiva University and Highbridge Park. 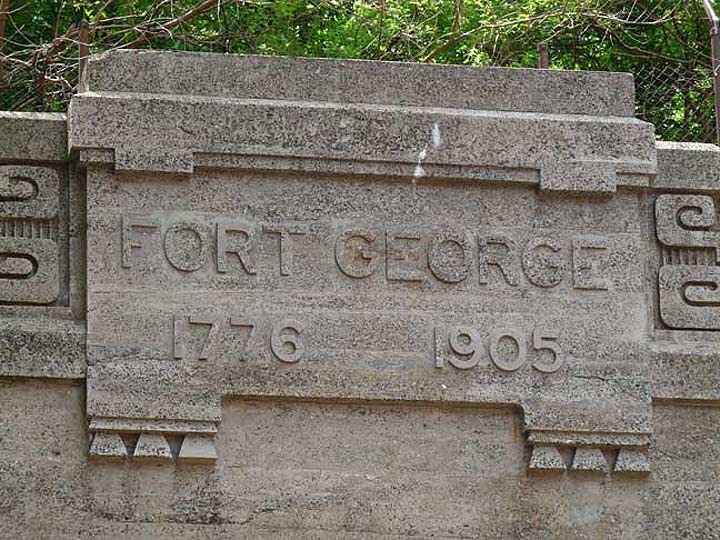 Near this hill, a street named Fort George Hill and the Fort George Tunnel that carries the IRT 7th Avenue Line also keep this fort on the map.

As the city has multiple toponyms sharing the same name, the Laurel Hill of Manhattan should not be confused with the Laurel Hill of Queens located within Calvary Cemetery. The Fort George of uptown should not be confused with Fort George of downtown, which stood at Bowling Green opposite Battery Park. IF you like this page, visit my earlier story on the little-known Fort Hill of Staten Island.

As always something interesting from Sergey.

Thank you for a most interesting post. I always assumed, incorrectly, that the “George” in Fort George referred to George Washington, not the British King George. The M3 and M101 buses have always carried a “Fort George” north destination sign, which I have noticed for my whole life. It took till now for me to realize it wasn’t due to George Washington, despite the neighborhood being called Washington Heights.

When I was a child, remains of Fort George all four log walls and the roof) were still there, unwatched and largely unforgotten, except for the neighborhood children. We climbed in and out the windows and played inside on the dirt floor. Are there no surviving photos? The fort eventually burned down (most likely arson) but in searching the internet I can’t find a single photo. Does anyone know of any?

Unforgotten should be forgotten.

We played in the fort also but climbed up through an opening in the overhang on the east side. I always thought it was an original Revolutionary War fort but later found out it was a GWHS School project.. I’m trying to find a picture of the “reproduction” fort to do a pen and ink drawing. The high school never answered my inquiries.

We lived across the street at 121 Fort George Ave. Tim Bonelli
as noted above is correct. The old log fort was a student project of the George Washington High School. We often played
around the old stone and concrete fragmented foundations of
long forgotten Fort George Amusement Park.

My cousin, Frank and I climbed into an old fort, and played there. I remember it being wood and maybe some stone. All I know is it was north of where we lived on Audubon Ave & 187th Street. He and I explored a lot
back then, in the mid 1950’s. We were only 10-11 yrs old. Never knew the name of it, but maybe it was this Fort George. Moved to NJ in ’57.

Great article about a neighborhood that I’ve hardly visited, in spite of the fact that I have lived for the past 8 years in Inwood, about a mile away.