Unlike other Manhattan streets with female-sounding names such as Ann, Catherine or Hester, Jane Street was not named for a woman,or at least it is not believed so. The origin of the name is in dispute, but the prevailing wisdom, at least in Henry Moscow’s 1978 Street Book (which does have some errors) is that it commemorates a local landowner named Jaynes, and that Alexander Hamilton died in his house after the infamous duel with Aaron Burr in Weehawken, NJ across the Hudson River. However, I don’t find an account confirming this, after a cursory internet search. If anyone does, the Comments section is open.

#5 and 7 Jane Street are a pair of 5-story walkup apartment buildings dating to 1871; according to the Landmarks report, they combine Italianate and neo-Grec building styles. 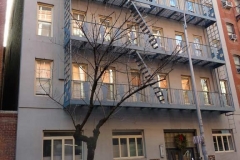 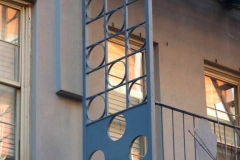 I had thought that the modernist exterior of #16 Jane had been done relatively recently, somehow getting around the Landmarks Preservation Commission rules about renovating exteriors, but nay, it looks essentially the same as it did in 1940, with the fire escape ironwork resembling dominos. The building goes all the way back to 1887, with the Moderne re-do in 1939. The report says a pair of murals by Tony Sarg can be found in the lobby.

A couple of doors down at #22 Jane is this former stable built in 1868. The coachman resided on the second floor, the dobbins on the first.

#32 Jane Street, a modest two-story dwelling, was built in 1870 and housed a printing concern for several years. Pierre Hardy, the luxe women’ s shoes brand, is the current tenant. Almost out of the photo on the right is #32 Jane street, one of the oldest buildings on the block, considerably altered from when it was built in 1829.

Corner Bistro, 331 West 4th Street at Jane Street, is marked by a classic shingle neon sign. The restaurant was founded in the 1960s, and has survived as management owns the building. It was the subject of a 1977 New York Times rave review for its burger, still considered among the city’s best. The restaurant gained a new location in Long Island City in 2012, before the neighborhood began its overdevelopment. Prices have been kept down with the classic Bistro Burger checking in at $12.75. A 1940 photo shows that the mast for the neon sign has been there for many years.

Jane Street, West 4th Street, and 8th Avenue is another of Greenwich Village’s multi-angled intersections. 8th Avenue was extended south from West 14th to Hudson Street in the 1800s. 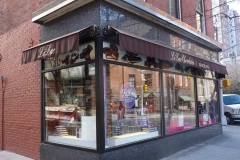 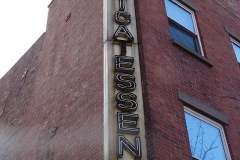 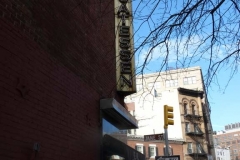 Li-Lac Chocolates, at #40 8th Avenue and Jane Street, was founded in 1923 and claims to be NYC’s oldest chocolatier. However, it wasn’t always at this location as a 1940 photo shows a hardware store here, and there’s a tell tale neon sign for a delicatessen that has been left in place.

I have to stay out of chocolate stores and bakeries, I have a strict rule about it. I’d eat the entire stock. 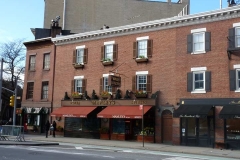 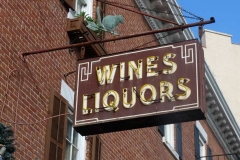 I’m not a liquor connoisseur, but I am a neon sign connoisseur and Manley’s has a terrific one at #35 8th Avenue and Jane. Have a look inside.

The corner of #31 8th Avenue at Jane looks very much like it did in 1940. The establishment called Tavern on Jane was the setting of the 1999 feature film The Tavern, directed by Walter Foote, the brother of owner Horton Foote Jr.

Periodically, neighborhood groups take over vacant lots and turn them into semipublic gardens, which now and then unlock their gates to let the public in. The Jane Street Garden, SW corner of 8th Avenue and Jane, is one of the city’s oldest, established in 1973. It has resisted entreaties by developers to build on it, and it is now public parkland. I pointed the camera through its new iron gate, which was installed in late 2017.

#39 Jane Street has an unconventional history. Neo-Classical in design, it was completed in 1924 as an electrical substation, built in the former location of an 1836 church. It was given actual windows and converted into a residential building in 1966.

Jane Street’s complement of Belgian block pavement begins at Hudson Street and runs three blocks to the end of the street at West Street. 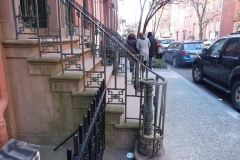 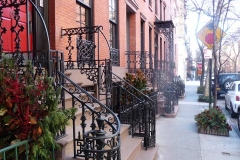 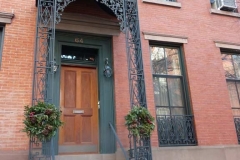 The Jane Street block between Hudson and Greenwich is relatively short because Greenwich Street zigzags a bit, following the old Hudson River shoreline. However, it has some of the Village’s best wrought ironwork on the stoop railings and building fronts. They’re part of a row of buildings from #58-66 developed in the 1840s by builder Stacey Pitcher. Take a look at the LPC Report, page 401, for a detailed description.

Though its front door is clearly on Greenwich Street a considerable distance from Jane, this former factory building is known as #68 Jane Street. Bear in mind that Greenwich Street was completely shrouded by an elevated train in various stages between 1868 and 1940.

80-1/2 and 82 Jane Street are an imposing pair of 5-story apartment buildings that went up in 1887. One of them was give a ‘half’ address because plots to its east and west had already been developed and numbered. In one of a number of historic plaque misdirections around town, 82 is identified as the William Bayard house, where Hamilton was taken with his mortal injuries after the Burr duel. Jaynes, you say? Some accounts say the Jaynes house, some the Bayard House. This house is neither — it was built over 80 years after the duel!

Though some misidentify these metal disks on sidewalks as manhole covers, they are actually coal chute covers; coal delivery would direct coal down these chutes directly into basement coal burning furnaces. Some of them may still be in the basements of these classic dwellings, though coal is no longer used to heat the vast majority of NYC buildings.

Traffic is controlled by a single yellow blinking light at Washington and Jane Streets.

In the mid-1980s, long before there was a push to turn the West Side Freight Elevated (The High Line) along Washington Street in the West Village into a park, much of it was demolished: though it originally ran to the old St. John’s Freight RR Terminal near Houston Street, the vast majority south of Gansevoort Street fell to the wreckers’ ball. Here we find a remaining portion of it above Jane Street at Washington. The scene bears scant resemblance to today’s, as the residential development at #99 Jane Street was built since then. To this day, though, traces of the old elevated are seen along Washington, as cutoff sections of the Railroad or buildings set far back from the street are tell tale signs.

In 1908, William A. Boring (whose architectural designs weren’t), also the designer of much of Ellis Island’s receiving stations, was behind the drawing boards for what was originally the American Seamen’s Friend Society Institute, meant as visiting sailors’ lodging and as a “temporary refuge” for sailors in distress. The building featured a chapel, concert hall and a bowling alley; a beacon shone to the ships in the Hudson from the top of the tower.

In 1912, the surviving crew from the Titanic were housed here so they would be close to the courts where the inquest regarding the disaster was held. By 1944, the sailors were gone, in a official capacity at least, and the YMCA was running it as an SRO hotel. (Though the 1970s Village People video “YMCA” was filmed on West Street, this wasn’t the YMCA they had in mind; that one was the McBurney on West 23rd.)

I have the full story of the Jane Hotel, and photos I couldn’t obtain today because of Permanent Construction Sheds, on this FNY page.

The deli at Li-Lac Chocolate was La Parisienne. Closed in the late 80s.

Great article as always! Regarding the naming of Jane Street, I’ve been digging around on some of the early land ownership maps of Manhattan. One of the more reasonably accurate early maps is “PLAN of the CITY of NEW YORK, in North America : Surveyed in the Years 1766 & 1767” (link here https://collections.leventhalmap.org/search/commonwealth:hx11z359r )
I notice that in about the location of present day Jane Street there is a landowner shown as “J. Jeauncey, esq.” (in other sources the name seems usually spelled as J. Jauncey.). I wonder if that name could have been the source of what became Jane St.
I have no evidence of this whatsoever, other than the location being about right and the name being somewhat similar. Thoughts?

Nice Article, I lived on West 4th St near 8th Ave for more than 10 years starting in 1970. I have been at the Corner Bistro few times since I moved out of the Greenwich Village , I used to go there very often but today is not what it was in the 70s too many tourists. Good for owners.

The Corner Bistro is on the front and back covers of the Bee Gees LP “Mr Natural” from 1974. Not a big claim to fame, since it is one of their least known albums, and I express doubt that it explains “too many tourists”! But any bar that’s been in business under the same name for at least 45 years is pretty impressive. https://img.cdandlp.com/2017/05/imgL/118804689.jpg

For some reason, I recall this was set in Jane Street. (?)

My aunt lived at the corner of Hudson and Jane back in early/middle 1970’s. I vaguely remember it being above a bar/restaurant and her front door was next to Jason Robards. I met him when he walked his little dogs. My aunt was running NY City’s day care services, under Jerry Hornblast. Or, that’s my vague recollection