LaTourette Park is a vast expanse…511 acres of parkland in the heart of Staten Island stretching from Seaview Hospital in Willowbrook southwest to Richmond Avenue near the Staten Island Mall, originally belonging to the farming LaTourette family who sold their property to NYC in 1928. The LaTourette mansion on Richmond Hill Road north of Richmond Town, built in 1836, is now the clubhouse of the LaTourette Golf Course. The park is dominated by steep hills…Heyerdahl (the site of an abandoned vineyard), Fort (a British Revolutionary War redoubt), and Moses Mountain, produced by landfill from the abandoned Richmond Parkway extension project. Bucks Hollow, an English translation of the Dutch for “goat hill” where goats once grazed near Heyerdahl Hill, has been stocked by the NYC Parks Department with tree frogs, butterflies, and fauna such as sweetfern and columbine.

In the 1960s, implacable highway builder Robert Moses, head of the Triborough Bridge and Tunnel Authority, proposed to build an extension of Willowbrook Parkway (now the Dr. Martin Luther King Expressway) south through Willowbrook and LaTourette Parks to Hylan Boulevard in Great Kills Park. Land was cleared in Egbertville, Richmondtown, and Oakwood. The plan would have decimated much of Staten Island’s greenbelt here, including most of High Rock Park; after 25 years of community opposition, however, this spur of Willowbrook Parkway was scrapped. Its outline can still be clearly made out on maps. 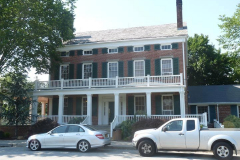 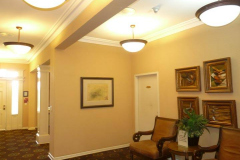 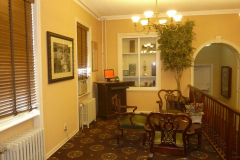 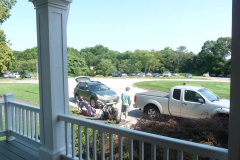 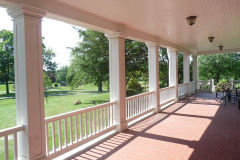 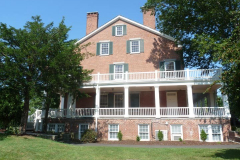 LaTourette House, Greek Revival brick with stone trim, was built by David LaTourette (1786-1864) who was a truck farmer and planter; the family farm remained in business until 1910. The LaTourettes arrived in Staten Island from France in the first decade of the 18th Century. The mansion was landmarked by New York City in 1968; it had been renovated in the 1930s and was largely rebuilt after a fire in the early 2000s. LaTourette Golf Course opened in 1929, a year after the land was sold to NYC.

Much of LaTourette Park remains wilderness, but there are plenty of marked hiking trails and a couple of surprises, such as the remains of the Heyerdahl property, to be seen. Historic Richmondtown Restoration, the Staten Island Lighthouse, and Crimson Beech, the only NYC residence designed by Frank Lloyd Wright, are in the vicinity.