Why “Great” Jones? In the post-Revolutionary era, attorney Samuel Jones assisted in revising NYC’s law statutes and he became known as “the father of the New York bar.” He lived in what became NoHo and when the city wanted to purchase some property to run a street through, he said fine, but name it for me. There was already a Jones Street in the Village, named for a brother-in-law, Dr. Gardiner Jones. Neither relative would accede to changing one of the street names, so the story goes that Samuel Jones suggested his Jones Street be named Great Jones, as it was longer and wider.

English is a funny language. In the States, at least, “great” has come to mean “very good” but it also has a lost meaning, “large.” In London, there are streets that have the same name but the longer or wider one is called “Great” and this is the only such instance in New York City. There are, however, plenty of “Little” streets.

#684 Broadway, a.k.a. #2 Great Jones Street, is a handsome Renaissance Revival building constructed in 1905 for Philip Braender, president of the Braender Rubber and Tire Company of New Jersey and the Braender Building and Construction Company of New York. Presently the ground floor is retail and the top floors are living spaces. 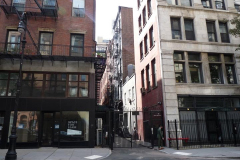 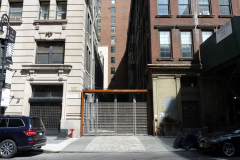 Great Jones Street is crossed by a private alley, called Jones Alley on most maps, but the Department of Transportation hasn’t replaced the street signs for awhile and only a property owners’s sign saying “Great Jones Alley” defines it. This is actually a rather convoluted alley that dead-ends north of Great Jones, runs south, crosses Great Jones and Bond, takes a dogleg east, crossing Lafayette, and then yet another dogleg south to Bleecker. It was laid out in 1806 as “Cross Alley.”

It’s now a private lane requiring people with leys or passwords to get by the gates, but the whole Jones Alley system used to be available for the public to walk. Photographer Pat Cullinan, Jr. acquired some photos during that time.

The eastern dogleg of Jones Alley between Lafayette and Bleecker is known as Shinbone Alley, though the DOT has stopped marking it. It, too, is behind a gate.

One of the handsomest buildings in NoHo or the East Village, the Schermerhorn Building at the NW corner of Great Jones and Lafayette, was designed in varying colors of brown brick and stone by Henry Hardenburgh, the architect behind the Plaza Hotel and the Dakota, and opened in 1888. The building originally replaced William Schermerhorn’s mansion and was originally a clothing factory! 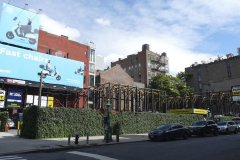 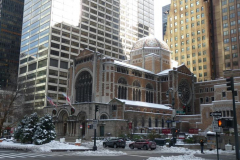 A mystery. A view through the parking lot at the NW corner of Lafayette and Great Jones reveals the back of a church, but if you walk around the block to East 4th there’s no church in evidence. It’s possible that this is the back end of the original St. Bartholomew’s Church. The moneyed Episcopalian congregation has been in a beautiful Byzantine-inspired church in Midtown at Park Avenue and East 50th Street since 1919, but its beginnings were in a more modest building here in the 1830s; one of the founding members was Seabury Tredwell, whose mansion is still there as a museum across the street on East 4th. 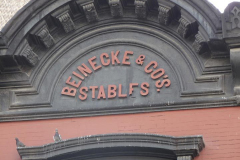 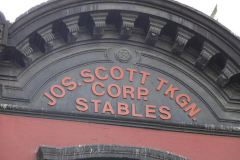 #31 and 33 Great Jones Street were built in 1871 for the New York Board of Fire Underwriters and was the original home of Fire Patrol #2, which FNY discussed on its Third Street page. After the fire patrol moved out the building had a variety of uses including stables, as the Beinecke & Co. inscription on the pediment attests. In 1976, Joseph Scott Trucking was in #31 and added its own inscription on the cornice in nonhistoric Helvetica lettering (a dead nonhistoric giveaway as Helvetica was introduced in 1957!) Restaurants are in the buildings now, and have erected curbside Covid Sheds.

Some more mysteries on Great Jones, this time at #39. I can’t ascertain what “G.J.C.P.” stands for. The first two letters stand for Great Jones but what what about C.P.? The address is home to the Eva Presenhuber art gallery.

The letters C.C.F. at #40 Great Jones across the street are abit less perplexing; this had been a branch of the C. C. Filson outerwear retailers, founded as Clinton C. Filson’s Pioneer Alaska Clothing and Blanket Manufacturers in 1897. The building itself was constructed in 1896 and was a light manufacturing center for most of its history. 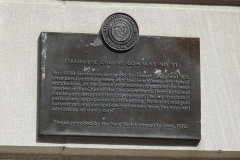 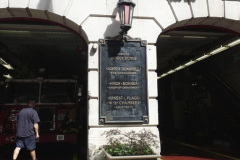 No question, the king of Great Jones Street is #42-44, FDNY Engine 33, a magnificent Beaux-Arts firehouse completed in 1899, co-designed by Ernest Flagg, whose imprint is all over NYC: Flagg Estates in Staten Island, Flagg Court in Brooklyn, and the former Singer Tower downtown on Broadway. The building’s most prominent feature is its monumental arch dominating the second and third floors.

#45 (left) and 43 Great Jones, a pair of Romanesque Revival buildings from the early 1890s. #43 has had less alterations and thus appears more like it was when first built.

#57 Great Jones, the center building with the arched windows, was constructed in 1868 and has been home to a furniture store as well as one of the kitchen wholesalers so prevalent in this stretch of the Bowery. The building is also notable because two of the 20th Century’s most popular artists, Andy Warhol, lived and worked here; this was Andy Warhol‘s Factory annex from 1970-1990, and it was Jean-Michel Basquiat’s residence at the time of his death in 1988.

I was hearted to see that the Great Jones Cafe, a beloved Cajun-themed diner-type restaurant at Great Jones that had closed after the death of its owner in 2018, had reopened. However, this time it is a “seafood casual” place called just Jones; the plastic letters above the door were retained. 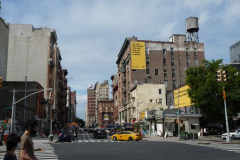 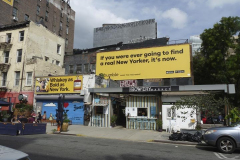 I was intrigued by these taxi-colored yellow and black ads fro Bumble, the hookup app. Not the hookup part; at age 63 the ship has sailed. I was momentarily stumped by the phrase “cuffing season.” I had to look it up:

Cuffing season refers to a period of time where single people begin looking for short term partnerships to pass the colder months of the year. Cuffing season usually begins in October and lasts until just after Valentines Day. The use of the word cuff references handcuffs, but is slang in the same vein as “hooking up” or “getting hitched.” [Merriam-Webster]

You never know what phrases you will encounter, prowling around.

The building where Basquiat lived and the adjoining building on Great Jones Street were the HQ of the famous early 20th Century Five Points Gang, I believe.
Al Capone and John Torio were members of this gang. The Five Point Gang led by Paul Kelly (Paolo Vaccarelli) battled the Eastman gang led by Monk Eastman.

A question re the graffiti that appears in the last photo, at the roofline above and behind the Bumble ad, reading “black phenix [sic]dragonspitsfireonfear”. I have seen similar, incomprehensible and vaguely disturbing graffiti on billboards above the BQE, in black paint in the same font. Does anyone have any info on who creates these?

Yes! Vice did an interview with the artist several years ago. 🙂 https://www.vice.com/en/article/4w7ppb/the-cryptic-billboard-messages-all-over-nyc-explained-1101

Somewhere on the south side of Great Jones was the second floor loft workshop of one of the Muppets craftspeople. Even when I walk on the street now, I can’t remember exactly which building but I am pretty sure it was between Lafayette and Bowery, I was there once in the 1990’s. Hanging from the walls were several huge Mr. Snuffleupagus outfits in various states of construction or repair.

I have heard that the expression “I’ve got a Jones” or “I’m Jonesing” comes from drug addicts who used to frequent an address on Jones st.

“hearted” or “heartened?” i prefer the former as it conjurs up the image of a heart emoji.

I have an answer to the mystery re: the back end of St Bartholomew’s as seen from the corner of Lafayette and Great Jones. The sculptor Robert Rauschenberg saved a portion of that church and expanded his studio into it. His building, now foundation, is at #381 Lafayette and connects to that mystery slice of a church from there instead of from the north through E 4th St.

Here’s a picture from the foundation website of the interior, you can even see the cars floating mid air in the parking elevators. https://www.rauschenbergfoundation.org/sites/default/files/styles/767×384/public/homepage/IMG_1326.jpg?itok=Px9fHV1Z