FARLEY ABIDES AT THE MOYNIHAN

THE McKim, Mead and White architectural firm designed the enormous former James Farley post office, which opened in 1913, as a companion to Pennsylvania Station, just across 8th Avenue. A monumental Corinthian colonnade stretches along 8th Avenue for 2 city blocks, which contains the unofficial motto of the U.S. Postal Service: “Neither snow nor rain nor gloom of night stays these couriers from the swift completion of their appointed rounds.” The phrase was first used by the Greek writer Herodotus to describe messengers employed by the Persians, located in today’s Iran, during the Greek-Persian Wars that took place between 500 and 449 BC.

After several years of discussion and planning, Penn Station’s western concourse was extended to encompass New Jersey Transit and Amtrak tracks and limited LIRR, and is now known as the Moynihan Train Hall, after U.S. Senator from New York Daniel Patrick Moynihan, who championed the project. It created new entrances at the southwest corner of 33rd Street and Eighth Avenue and at 8th Avenue and 31st Street. The entrances have escalators, elevators and stairs to the platforms. Plans to turn the Post Office building into the new Penn Station had been on the books for years, and the Moynihan opened to the public on January 1, 2021. See the link above for my photos and ruminations of both the Farley Post Office and the new Moynihan Train Hall.

The post office functions formerly in the James Farley building, named for the 1930s Postmaster General who expanded the building to a full city block, moved several years ago to the Morgan Processing and Distribution Center a few blocks away on 9th Avenue and West 29th Street. The public postal windows on the 8th Avenue side remain as they have always been, with the remainder of the building converted to the Moynihan Train Hall as well as retail and office space. Facebook has signed a lease to relocate its headquarters in the building. Before the transformation, Untapped Cities (which can get into building interiors I cannot dream of obtaining access to) got into the interior of the abandoned Farley Post Office space.

A corridor on the 33rd Street and 8th Avenue end of the Farley post office connects it with the second floor of the Moynihan. This space was formerly home to the Museum of Postal History, but the exhibits were moved out when renovations were underway; I didn’t know what the Post Office plans for this space. The Museum was mostly overlooked when it was open, with exhibits dusty and uncared-for. Perhaps the glass cases holding memorabilia for the better part of the 19th and 20th Centuries will be moved back in.

I was happy to see the wall lighting sconces were outfitted with new white coverings.

Showtime! Even after Moynihan Station opened, the Farley’s 8th Avenue postal window corridor was under renovation and was dominated by scaffolding. By May 2022, the scaffolds were gone and the renovations were complete. This area has kept most of the features it had when constructed in 1912 and reminds you of Grand Central Terminal, which was opened the following year. This is in the running for the most attractive of NYC’s many post offices, though I am partial to Flushing, with its painted depictions of Queens neighborhoods.

Until 2009 these were the only Post Office windows in NYC that were open all day, 24/7. That meant the Post Office would be in the news each April 15, as last-minute tax filers congregated here to get their returns postmarked by 11:59.

Remember to look up when you’re in this space. Some intricate and elegant terra cotta work decorates the entire ceiling, punctuated by beautiful pendant lighting.

The post office’s tables featuring brass lighting and supports have been newly polished and restored. Each lamp and sconce has new white reflectors, replacing the former green ones (most of which had been removed or lost). The tables can be wheeled around when floor polishing is going on.

The brass theme continues with these unrestored post boxes.

Plaque that answers the question. “Who Was James Farley?” Before 1982, this building was known as the General Post Office Building. 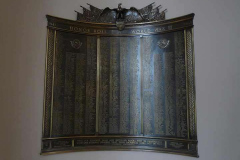 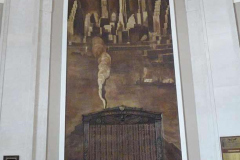 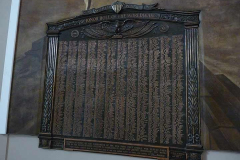 In the foyer entrance on the 33rd Street end of the postal windows corridor, we have a pair of bronze World War I and II memorials with the names of local soldiers who perished during the hostilities, as well as a 1938 Works Progress Administration mural by Russian immigrant Louis Lozowick entitled ”Sky Line and Waterfront Traffic as Seen from Manhattan Bridge” and funded by the Treasury Relief Art Project (TRAP) according to the website The Living New Deal. Unfortunately the bottom of Lozowick’s mural is obscured by the WWII plaque. This must have thrilled Lozowick, who lived until 1973.

On the 31st Street entrance to the post office window corridor, we find another Lozowick from the same year, “Triboro Bridge in Progress of Construction.” This one is also obscured somewhat by a glass case containg a scale model of the 8th Avenue end of the Farley Post Office.

Back to the 33rd Street end, where I found an unfenced staircase leading up. Today, I had no stomach for dealing with security guards, so I’d like to find out what’s up there. (I have a feeling it’s the postmaster’s office, which has been retained during the conversion of the rest of the building to the train station.) If you know…Comments are open.

Howdy, The second floor used to house the offices for the permit renewals plus other official offices.

I Had a Post Office Box In This Post Office Read The Front Insigna about The US Post Office workers and institutions. In The Back NYC Homeless where Gifted with a Free Post Office Box as an NYC Caseworker and Social worker I wrote thousands Referrals for My Homeless clients.

Actually, Penn Station’s western concourse was extended to encompass New Jersey Transit and Amtrak and LIRR tracks, since LiRR trains frequently use tracks 13 through 16. Interestingly, LIRR is an official Moynihan denizen, along with Amtrak. Both have ticketing facilities there. NJ Transit, to the best of my knowledge, has no ticket office or other official presence in Moynihan but its customers can use Moynihan if their train occupies Tracks 5 through 16. Tracks 1 through 4 are exclusively NY Transit usage but are not accessible to/from Moynihan.

I can’t consider Moynihan a LIRR terminal in practical terms. I do wait there for LIRR trains, but in the Moynihan Tracks 5-16 primarily serve Amtrak. Some LIRR go to Track 16 and there’s an elevator to 17. I like the Moynihan, but the geography limits its coverage.

I agree with you Kevin. Moynihan is too far west for most Penn Station commuters; it’s not practical unless a LIRR customer is arriving on a downtown 8th Avenue subway, or on the street from the west of 8th Avenue. I did work between 2007 and 2012 at a location where Moynihan would have been perfect to use. There are many LIRR trains that use tracks 13 through 16, but rarely does a Port Washington train use a track lower than 16, so I understand your opinion.

Another factor a typical LIRR rider will consider is where he/she wants to be when arriving at one’s destination station. Getting on via Moynihan puts a rider at the very back (west end) of the train. That location may or may not be best, depending on the final leg of the journey – walk, bus, taxi, or parked car location. The plus side of the coin is that most eastbound LIRR trains are less crowded in the back.

Sorry, a typo. Should be NJ Transit, obviously. Mea Culpa!

I worked at this post office when I was in college during the late 60s / early 70s. Unfortunately, I was confined to the huge mail sorting room (recently replaced by the new Moynihan main concourse). It was like working at a car factory in a Hollywood B-movie, circa 1937. Some of the workers still lived with their mothers. Others regularly showed up drunk. The equipment was ancient, noisy and often dangerous. Every few weeks someone would get their arm shredded by a sorting machine or mangled by a parcel conveyor belt. But hey. . . good times!

There is a scene in the famous 1947 movie Miracle on 34th Street showing postal employees at work at that location or a similar one.