LAST OF THE DOUBLE DESKEYS

Since we recently lost another of 5th Avenue’s classic 1910s-era Twin lampposts, at 32nd Street, there re just 4 left from a proud history of hundreds.

Demise of a classic at 5th and 23rd

However, soon we may be pronouncing the death of their replacements, the special-edition twin copper-colored twin Deskeys that replaced most of the 1910s Twins beginning in 1965. At one time, they lined 5th Avenue from West 33rd north to West 61st, numbering over one hundred, but now we are down to just 21.

Most of the Deskey Twins were decimated by the twin 34th Street Partnership posts that appeared during the 1990s. Those now are the dominant 5th Avenue lampposts between 33rd and 42nd Streets. I’ve never really paid attention to them since their design is so anodyne and bloodless: I call them the RoboLamps. 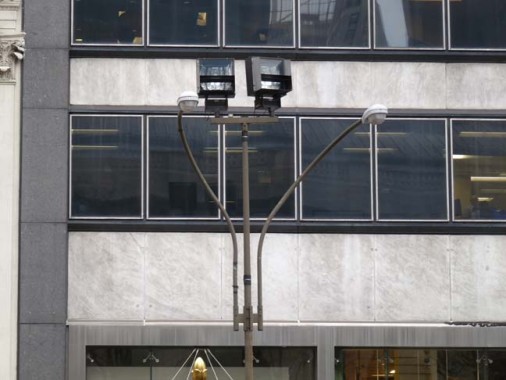 This is now the southernmost Twin Deskey on 5th Avenue, facing the NY Public Library between 41st and 42nd Streets. Unlike the regular run of Deskey posts, the lamp masts are not directly attached to the shaft, but instead there is a special fixture at the top of the pole with five slots for attachments. Two are used for the lamp necks, but others can hold stoplights, fire alarm lights, and in this case, a pair of spotlights that light up the library at night. 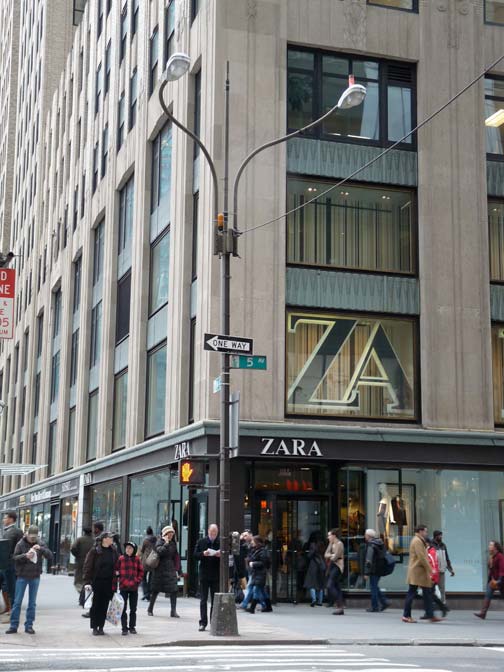 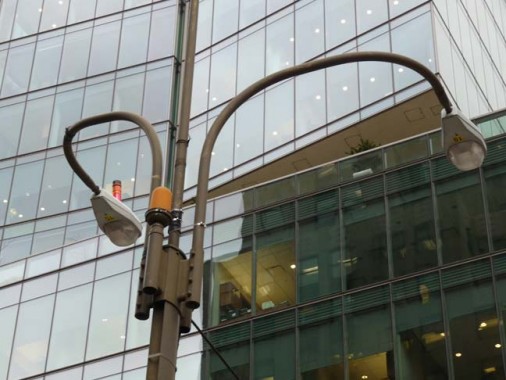 The remaining Deskey lamp at 5th and 42nd Street is the only one holding an orange fire alarm light. This light is now nonfunctional, since there is a newer one mounted on the luminaire at left. 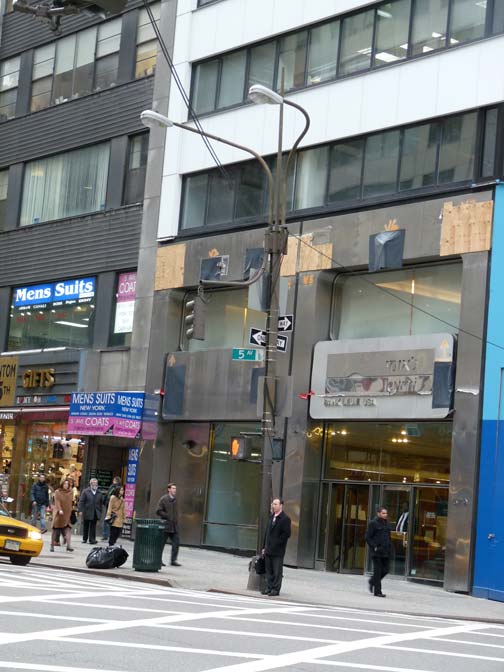 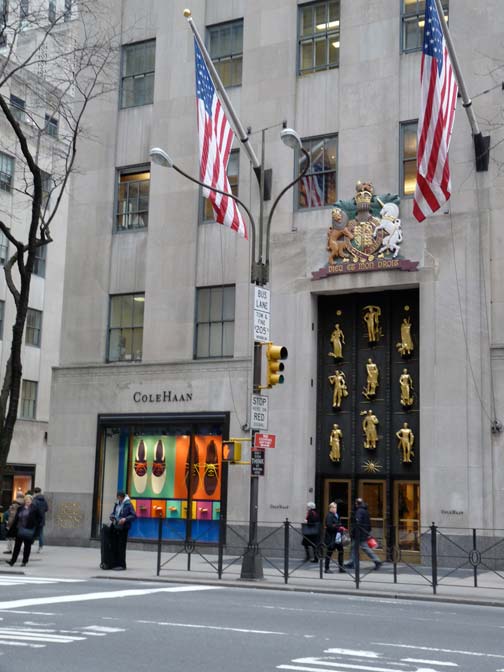 Midblock at Rockefeller Center between 49th and 50th Streets.

As stated before, there are now just 21 examples of this mid-20th Century lamppost design remaining, all on 5th Avenue:

If one of these posts falls, the Department of Transportation will replace it with the closest straight mast or cobra neck posts lying around, making 5th increasingly a mishmosh of lamppost styles instead of the distinct style the Queen of Avenues ought to have.

DEATH OF A FADED AD

to see 5th Av in all it’s Twin glory, view the opening of 1961’s Breakfast at Tiffany’s (available via streaming at Netflix)

Sad to report, the post at the NW corner of 5th and 48th is no more. It has been replaced by a normal octagonal post and mast arm, painted in the familiar 5th Avenue “bronze” color (except for the luminaire). (I was there for yesterday’s St. Patrick’s Day Parade).

When these lampposts were first installed, they also removed the tall green traffic lights that stood on Fifth Avenue, which only had two lights, red and green. Each of the traffic lights was topped with a little statue of Mercury.

The statues were placed on some of the double Deskeys, I guess as a nod to the past, and they stood guard on the braces that were not occupied, but over time, they vanished. I’m not sure what happened to them.

The double Deskeys also could hold little poles that had Red Cross flags, and I’m not sure why…I think some kind of charity drive.