The Market Diner, manufactured by the De Raffele Diner Company and opened at 11th Avenue and West 43rd Street in 1964, closes at the end of the business day on Sunday, November 1st, 2015. The Market rented its space from a real estate company called the Moinian Group, which had purchased the plot in 2004 but until now had not had the capital ready to build what it wanted all along: a 13-story mixed use building. Thus, the Market Diner has been evicted. 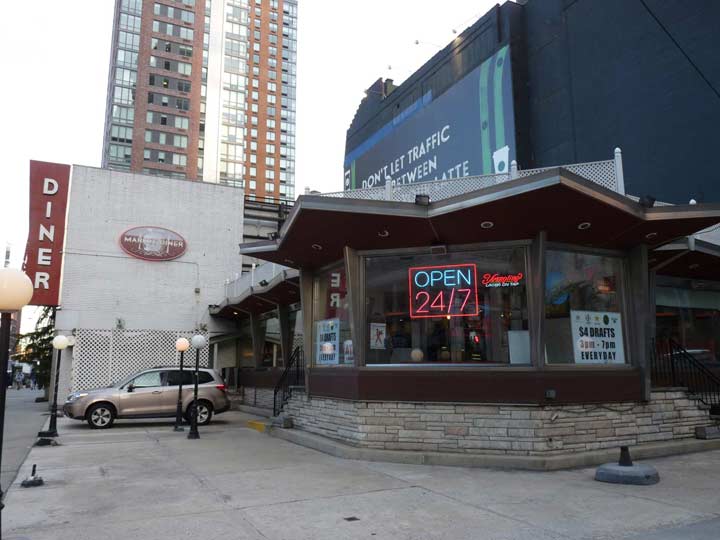 The Market was the last of three diners in operation on 11th Avenue in recent history; the River Diner at 11th and West 37th, where John Lennon once posed for a photo, left the scene about 20 years ago, while the Munson Diner at 11th and West 49th, where scenes from the Seinfeld show were filmed, was uprooted and moved to the upstate town of Liberty, NY in 2005, but after reopening there in 2007, it could not find a clientele and closed there, as well, in 2011. 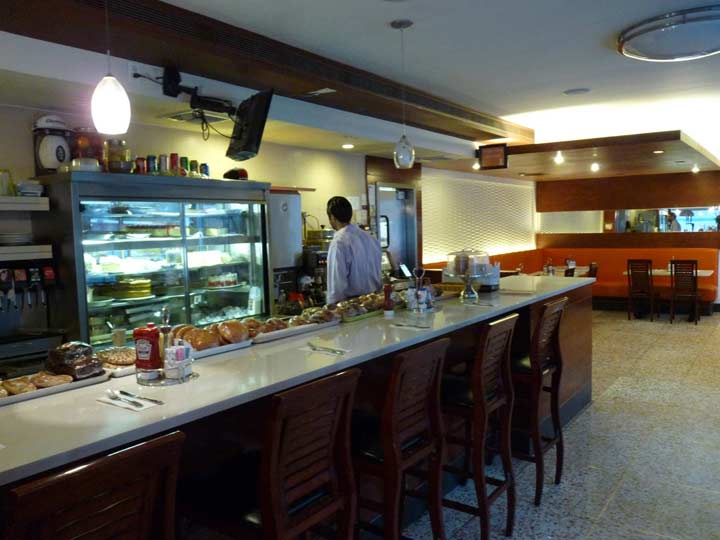 A similar fate befell two other classic NYC diners, the Cheyenne at 9th and West 33rd (which I considered a virtual FNY office) and the Moondance, at 6th Avenue and Grand Street. The Cheyenne, with help from NYC preservationist Michael Perlman was purchased, packed up and moved to Birmingham, AL, where it awaits restoration, while the Moondance was moved to LaBarge, WY, where it failed to find an audience. Meanwhile, the famed Victory Diner in Dongan Hills, Staten Island, was moved to a position near the South Beach boardwalk — where it was ripe for predation by Hurricane Sandy. Its future is also unclear. 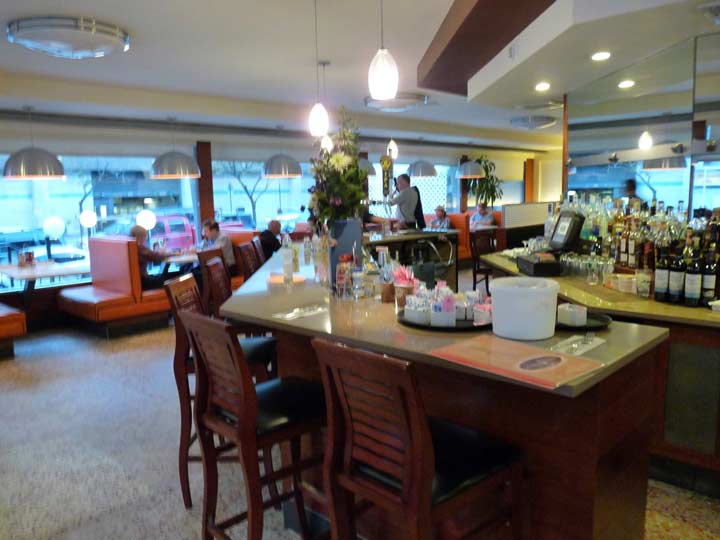 Other diners have adapted to the modern market. Both the Relish Diner in Williamsburg, Brooklyn and the Empire Diner in Chelsea have made a go of it with upscale, more expensive menus; but word has come that the Relish, now a branch of Spanish restaurant La Esquina, is itself closing so the owner can build a residential tower. 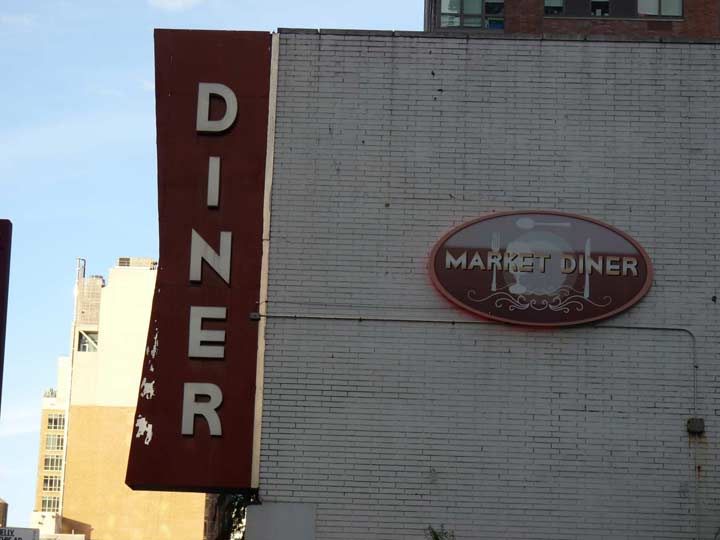 However, there are survival stories in Manhattan, at least. The Square Diner, in existence in Tribeca since the 1920s, still is doing well (though it closes at 4 PM on Sunday). Tom’s, on Broadway and West 112th, whose exterior was filmed for Seinfeld and which inspired a hit record by Suzanne Vega, still draws healthy crowds. The Bellaire and the Neptune, both in Astoria, are rated among the city’s best.

Sheepshead Bay’s El Greco vanished some years ago, as well as the Tiffany in Bay Ridge. The Bronx is doing its part as the Riverdale, Royal Coach in Pelham Gardens, Pelham Bay Diner, and George’s in Middletown are going strong. The Bronx may have more intact classic diners left of all the boroughs.

The Scobee of Little Neck, Queens, another one of my “offices” closed in 2010, though the shell was left standing for 4 years after that. Its cousins along Northern Boulevard, the Bayside, Landmark (Great Neck) and Seven Seas (Port Washington) are enduring. 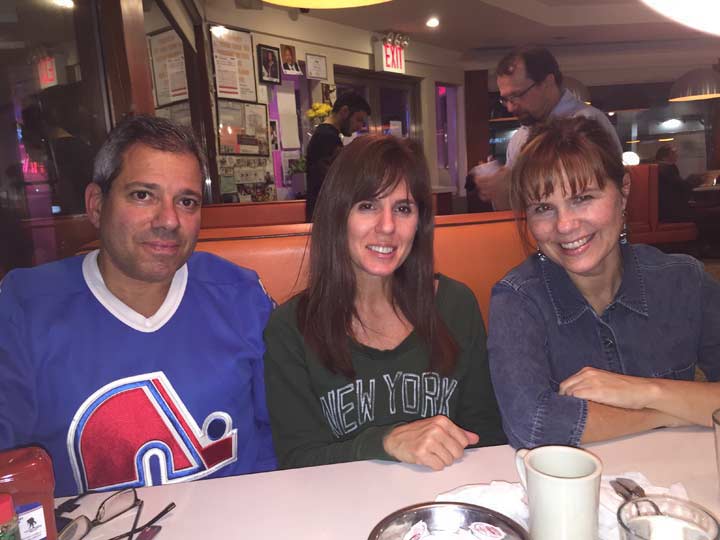 Diners are where friends meet. I have closed down several diners in NYC now. With me for my first and last visit to the Market were Vinny, Angela and DeeAnne.

A nice basic diner in the Bronx is the Tibbett.

There are rumors that the Neptune may close.

My one & only visit to the Market Diner was an August Saturday in 1999 when I took the family to visit the USS Intrepid complex. Good, solid comfort food with Queens pricing (a pleasant surprise). The world has changed so much since then, sadly for the much worse.

I remember a diner that was on 4th avenue between 24th and 25th streets in the late 1940’s and the 1950’s in Brooklyn.I used to walk past it every day on my way to the elementary school that was located on 25th street between 3rd and 4th avenues. I never noticed the name of the dinern but I do remember the aroma of the food coming from there.

As an afterthought about my earlier posting I’d like to say that you could tell if the owners were Greek by the soup they served. On Thursday it was Pea Soup, and the practice continues on till today. I don’t know what soup was for the other days of the week, but, Thursdays………PEA SOUP.

The Victory Diner on Staten Island is history. Evidently, thanks to Sandy, it was too expensive to save.

We have the same problem here in Seattle.. The Developers have taken over and are tearing down many one story older buildings of all types, not just restaurants…..Apts and Condos are the thing now..

It would be nice if a lot of these diners could be saved, but there are problems for that. The first one is finding someone who wouldn’t mind owning it. The other one is that developers claim that the place they are on is prestigious and should give them the right to build on it. Another problem to why many of these diners get either demolished or relocated is mainly because many the developers can get their way just by having friends in high places, and by that I am referring to politicians that they endorse to help set up a plutocracy, which is pretty much one dollar one vote.

My father Nat Grossman baked for 7 years at the Market Diner until he was 70 years old. I believe it was in the sixties.When he was 80 they sent a limo to pick him up to show the baker how to bake a certain cake.They gave him $100 and sent him home in a limo. He was very proud. Frank SINATRA stopped in many nights to have coffee and his cake.

Wasn’t there also a Market Diner in So. Manhattan North Of Battery Park?