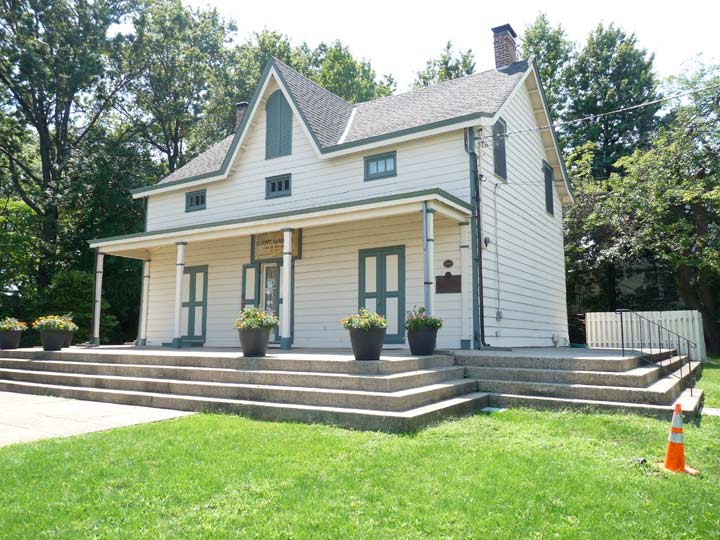 Giuseppe Garibaldi (1807-1882) crusaded for a united Italy in the early to middle years of the 19th Century. In 1834 he joined Giuseppe Mazzini in the Young Italy Society; after an unsuccessful uprising in Genoa in 1836, he fought in South American wars of liberation, using what today would be called guerrilla tactics. After a sojourn in the USA in the 1850s he organized and led insurgencies leading to conquests of Sicily and Naples which ultimately produced the unification of Italy in 1860 under King Victor Emmanuel II.

Garibaldi resided in the USA, in the home of his friend, Antonio Meucci, from 1851-53. Meucci was the inventor of the telephone as far back as the 1850s (Alexander Graham Bell, who everyone considers the inventor, was able to obtain a patent for the device before Meucci could afford one).

Meucci was born in Florence, Italy in 1808. He studied chemical and mechanical engineering at the Florence Academy of Fine Arts and had designed an acoustic version of a telephone as early as 1834, the year he ws imprisoned on suspicion of being involved with the Italian unification movement, with which he was sympathetic. In 1835 he journeyed to the Americas, stopping in Havana, Cuba long enough to construct a system for water purification and restoring Havana’s Grand Theatre.

While still in Cuba in 1849 Meucci developed the first of the devices that could be said to work like the modern telephone; and in 1850, he and his wife, Ester, moved to the house you see above, in Clifton, Staten Island. Between 1856 and 1870 Meucci produced more than 30 telephones employing electromagnetism. Funding for his invention was hard to come by; Italy was inflamed in revolution, led by his friend, Garibaldi. Meucci was then struck by a series of bad breaks as he was left bankrupt by debtors. A series of court cases in which Meucci attempted to sue Bell for patent infringement were ultimately unsuccessful and the last case was dropped upon Meucci’s death in 1882.

In 1907 Meucci’s house was moved to its present location at 420 Tompkins Avenue and Chestnut Avenue; between that year and the 1950s, Meucci’s house was overwhelmed by a pantheon with classical pediments and columns erected by the Garibaldi Society proclaiming the house as the Garibaldi Memorial. That seemed to be the modest inventor’s fate: stymied by Bell in life, and overshadowed by Garibaldi in death! The liberator, during his time on Staten Island, worked as a candlemaker in Meucci’s factory and fished in the island’s many lakes.

Since 1956 the Order of the Sons of Italy has maintained the house as a museum, open to the public. The museum contains many letters and photographs documenting the lives of the inventor and the revolutionary, examples of Meucci’s handmade furniture, and a library of rare and out-of-print books. Contact the Museum at (718) 442-1608.

I have more images of the Meucci house on this FNY page on Rosebank. It’s one of my favorite parts of NYC, so I wrote a second page.

BEFORE THE SUNSET: 4th Avenue and 39th Street