In recent years it has been the norm in New York to demap streets by transforming them into plazas, or to give them “road diets” by reducing traffic lanes in favor of wider sidewalks, green medians, and bike lanes. On the Williamsburg waterfront in Brooklyn, little-known River Street was extended from its original three blocks by another five blocks as part of the Domino Park project that replaced a shuttered sugar refinery with offices, residences and a park. 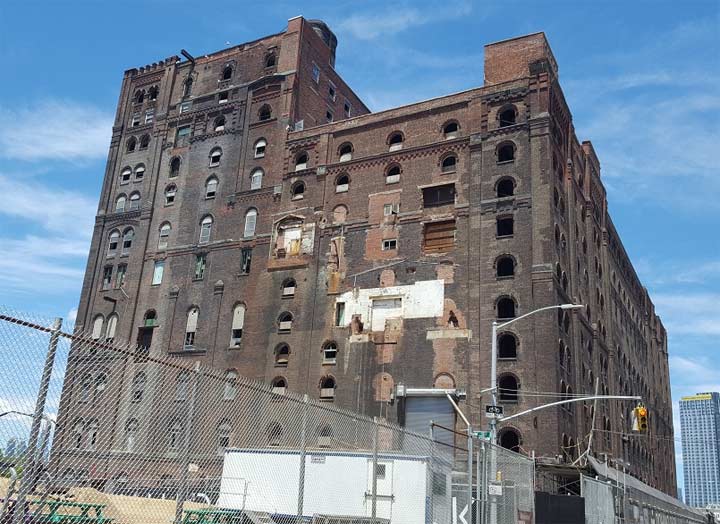 Domino Park opened to the public on June 10, 2018, quickly joining Gantry Plaza, High Line, and Brooklyn Bridge Park as an outdoor gathering place for stylish people, their infants, and dogs. In contrast to these mentioned parks, Domino Park is entirely owned and operated by a private entity. When the 11-acre Domino refinery closed in 2004, a spirited public debate was set off about public waterfront access and housing affordability. From the public input into the park’s design, River Street was extended to South Fifth Street, allowing for more public access. I took a walk through the new park, from north to south. 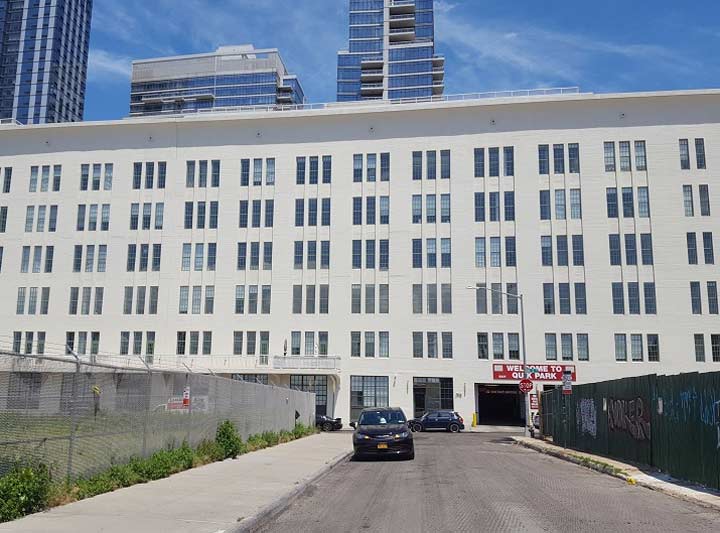 Looking north on River Street are its original three blocks, bracketed by the historic 184 Kent Avenue, a former warehouse turned rental. Built for the Austin Nichols Company in 1915, it was designed by Cass Gilbert, perhaps best known for the Woolworth Building. 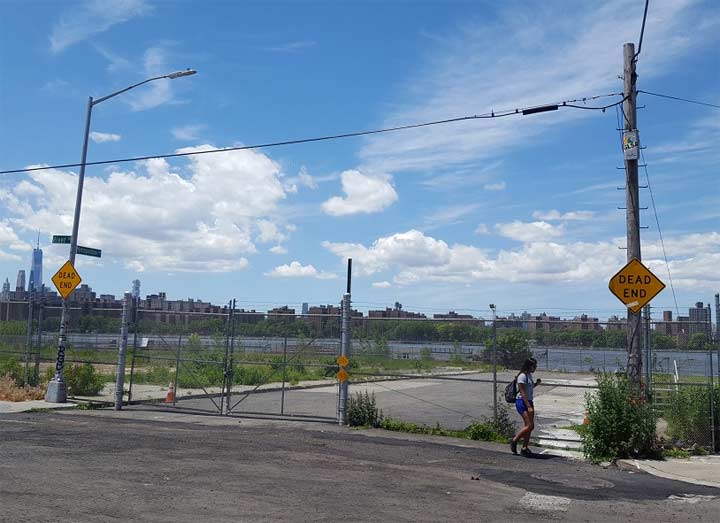 Forgotten-NY loves to reach the beginnings and ends of particularly long streets. Some have parks and monuments at their tips, while other peter out into narrow lanes and dead-ends. At River Street, the fenced-off western tip of Metropolitan Avenue runs into East River. This great thoroughfare runs for 8 miles from Williamsburg to Jamaica. Kevin walked its entire length in 2015. 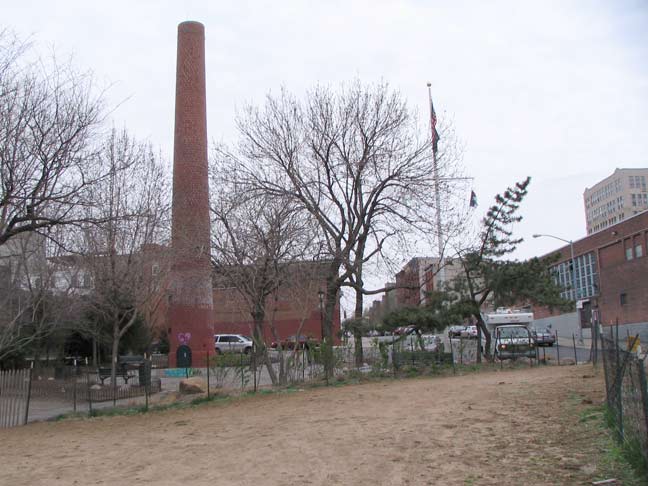 The 1.7-acre Grand Ferry Park occupies the dead-end of Grand Street by the East River. 80 years after the last ferry departed from this location, the park was officially dedicated here by the city. Kevin Walsh told this park’s story back in 2013. Prior to the opening of Domino Park, this tiny park was one of the few places in Williamsburg where the public could access the water’s edge. Today, you can also walk the North Brooklyn shoreline at East River State Park, Northside Piers, Bushwick Inlet Park, WNYC Transmitter Park, Newtown Barge Playground, and the dead end on Manhattan Avenue. 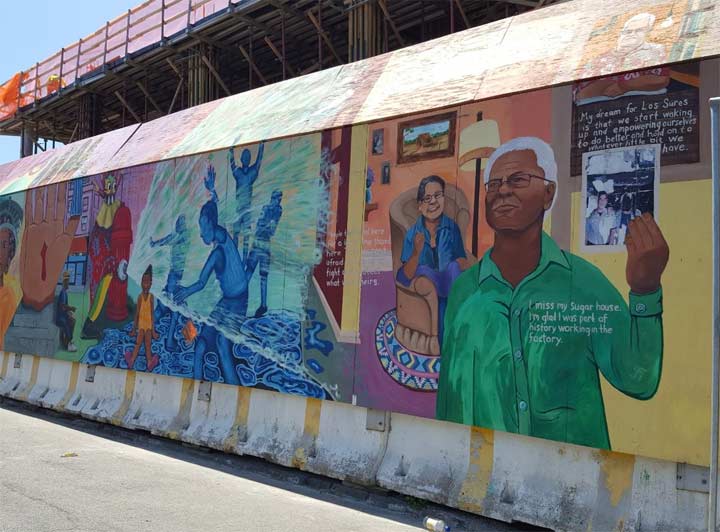 While Domino Park was under construction, its temporary wall was graced by murals that honored its industrial past. A portion of this wall was still standing on my visit. 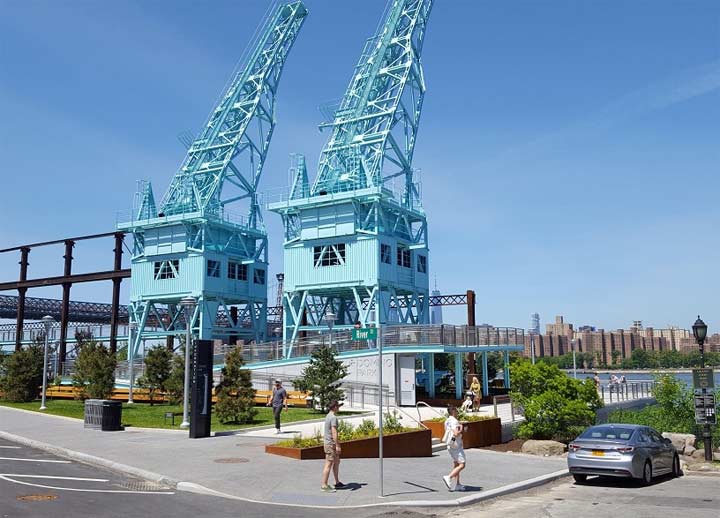 Once sandwiched between a power generating station and the Domino sugar refinery, where there was once a wall separating parkland from factory, there is now an open view to the decommissioned cranes that used to serve Domino.  Like the gantries of Long Island City and the cranes of IKEA Park in Red Hook, Domino’s two cranes have been stripped of their machinery and the wheels have been fixed to beams elevated a few inches above the preserved tracks. So while it looks like a fun ride, it is really nothing more than a selfie backdrop. 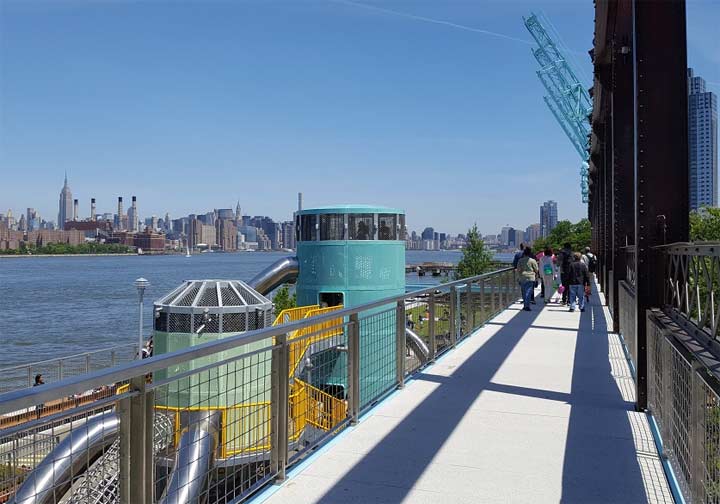 If the tracks don’t remind visitors of the High Line, then head upstairs to the elevated walkway that runs for 100 feet above the park. The park’s designer James Corner Field Operations also worked on High Line. 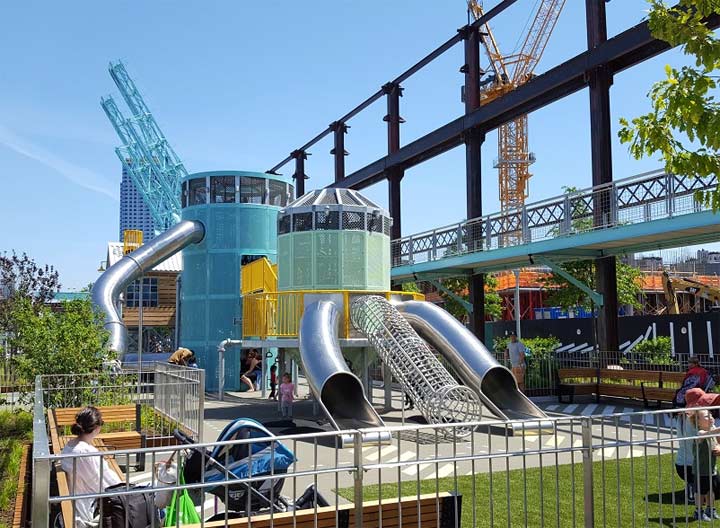 Designed by Brooklyn artist Mark Reigelman, the playground offers an interpretive experience into the production of sugar through slides and play equipment. 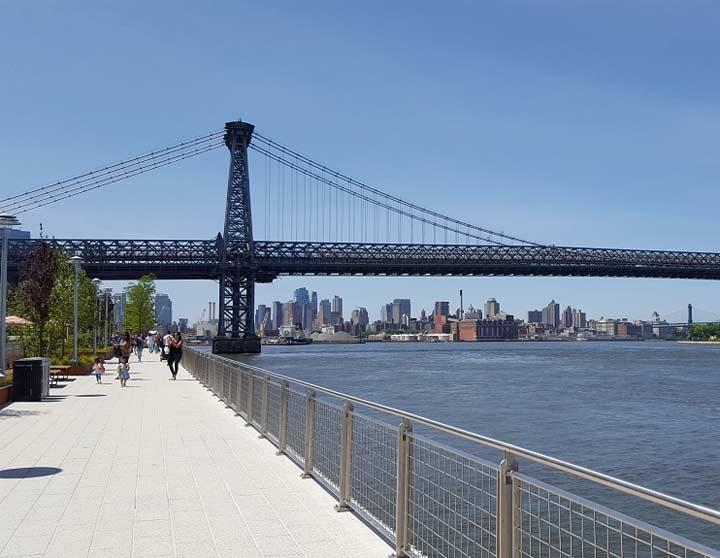 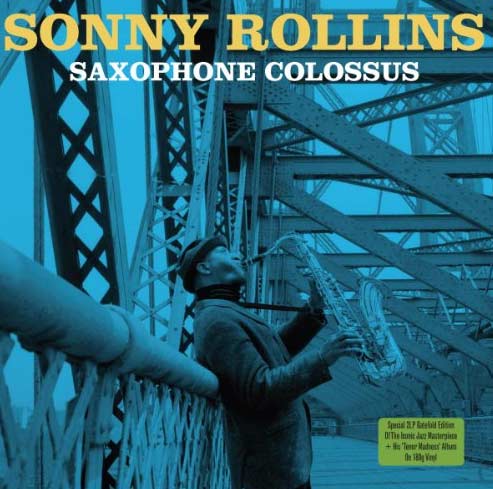 The most impressive item to see from Domino Park is Williamsburg Bridge, which frames the view to the south. Along with a roadway and subway tracks, the bridge has its walkway for pedestrians and bikes. From 1959 through 1961, jazz musician Sonny Rollins withdrew from the music scene to play alone on the bridge walkway.

He descended from the bridge as a changed man, and went on to produce 50 more albums. Devotees of Rollins are seeking to rename the entire bridge after Rollins. Sorry, but within the past decade we’ve had Queensboro Bridge, Triboro Bridge, Brooklyn-Battery Tunnel, and Tappan Zee Bridge renamed after people, enough already! I like my New York with functional, geography-related names. I propose renaming the walkway for Rollins, but the entire bridge? That’s too much! 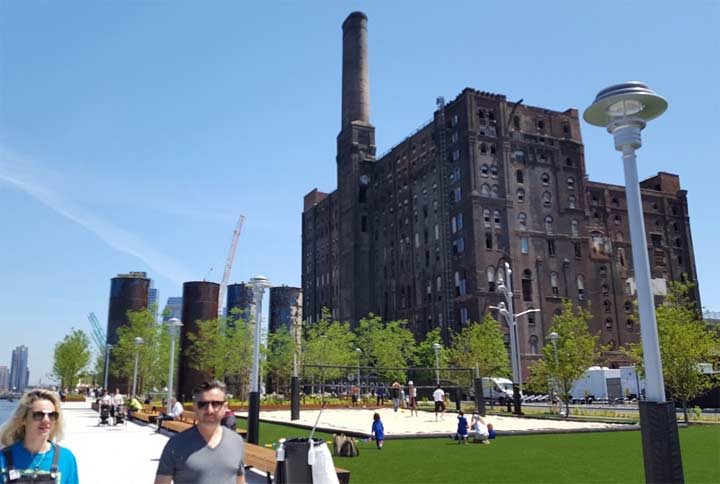 Another iconic structure facing the park is the landmarked Filter, Pan & Finishing House built in 1881. Prior to the construction of Williamsburg Bridge, its 155-foot smokestack was the tallest thing in the neighborhood. The processing of the raw sugar began here, where it was mixed with water and filtered through canvas and charcoal. As foreign materials were removed, the solution flowed to the nine-story Pan House section. After being reduced to syrup, it was pumped to the Finishing House, where it dried and then packaged for consumption.

Domino’s history in Williamsburg began in 1856 when executive 1856 Frederick C. Havemeyer Jr. leased a property where the water was deep enough to construct a dock for ships. His brother William F. Havemeyer served as a three-term New York mayor, with his name given to Havemeyer Avenue in the Bronx. The burned-out appearance of the exterior wall may be scrubbed clean in the future, but I like it the way it is, and its multi-colored bricks too. 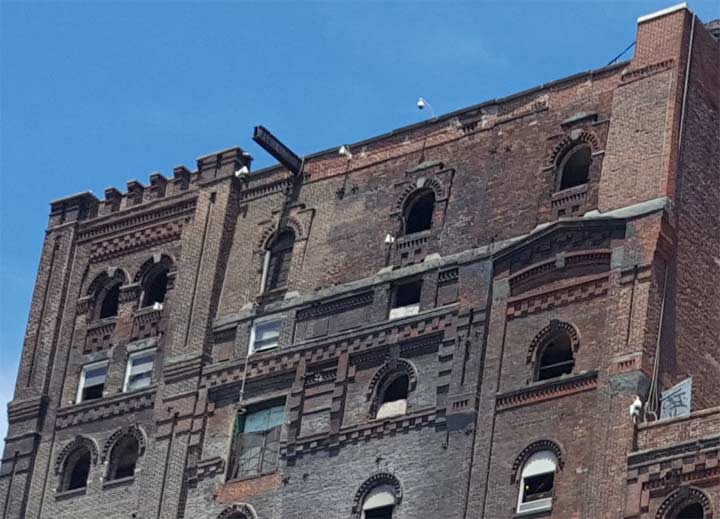 Kevin first gazed upon this building in 2009 during his walk of Kent Avenue. Back then this was a two-way street, an easy route for motorists seeking to avoid the heart of the neighborhood. Since late 2009, half of the street has been designated as a two-way bike route. 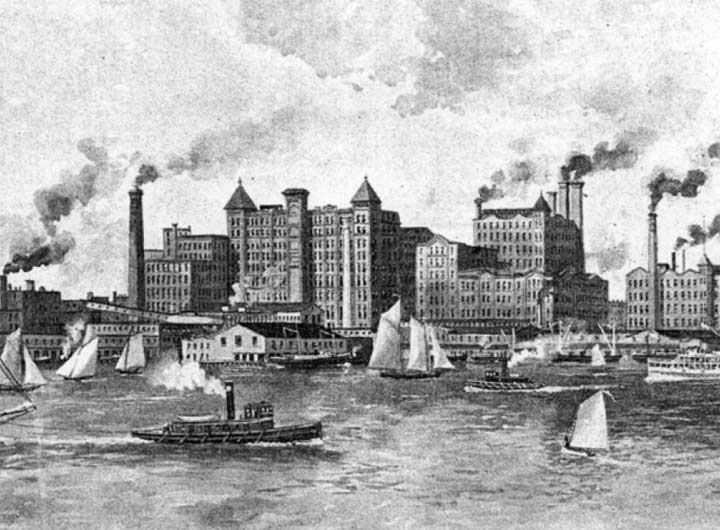 As the company grew, this building no longer defined the skyline as more recent structures were built around it. In the above image from the 1893 King’s Handbook of New York, the complex had a castle-like appearance, commanding attention on the heavily-trafficked waterway. By the end of the 19th century, Havemeyer’s sugar company became a monopolistic trust, as defining of its product as Carnegie was to steel and Rockefeller was to oil. In 1901, the American Sugar refining Company adopted the Domino brand, which became its public name. It produced sugar in Brooklyn until January 30, 2004, when labor costs, competition from sweeteners, and high taxes sent the company to cheaper lands, following other famed food manufacturers that were once based in New York City. 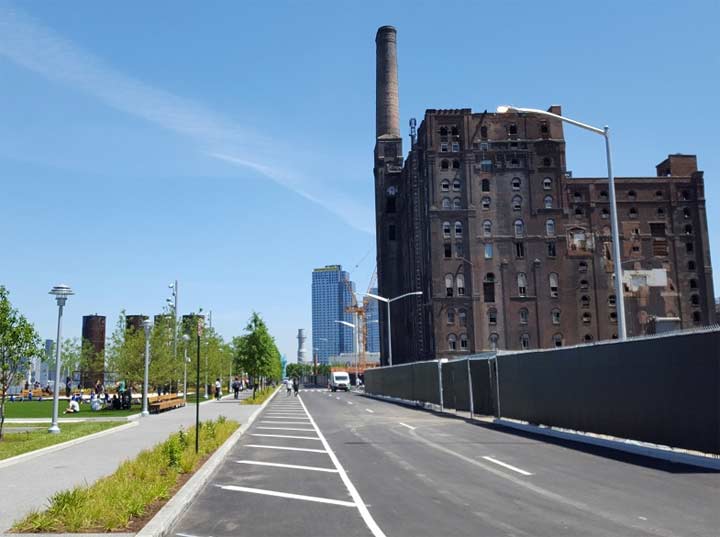 After the demolition of the surrounding towers and walkways, this historic brick building stands out again on the waterfront. The interior was gutted, soon to be redeveloped as a “building inside a building.” 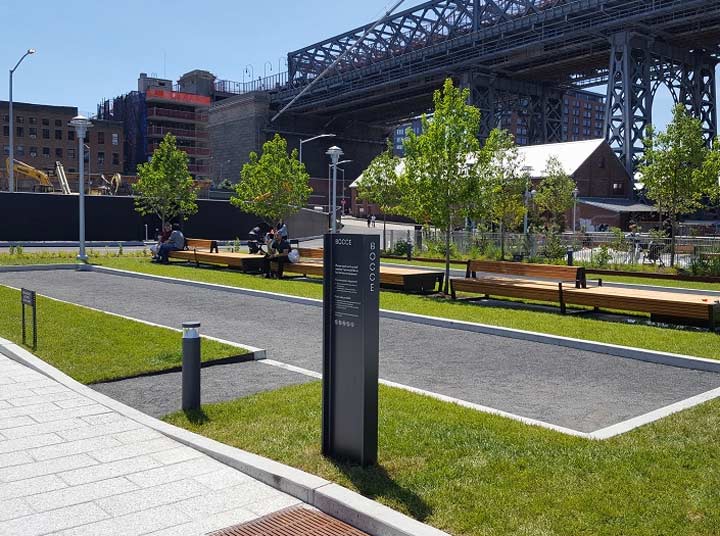 Bocce ball, the Italian cousin to bowling was once visible throughout the city’s parks but as the Italian population dispersed and assimilated, many bocce courts have fallen victim to neglect. Of course there are still 35 active bocce courts throughout NYC Parks, and an annual tournament, but it’s up to the younger generations to keep the sport alive. Recognizing the historic Italian community in Williamsburg and possibility of hipsters joining in, Domino Park has two bocce courts available for play. 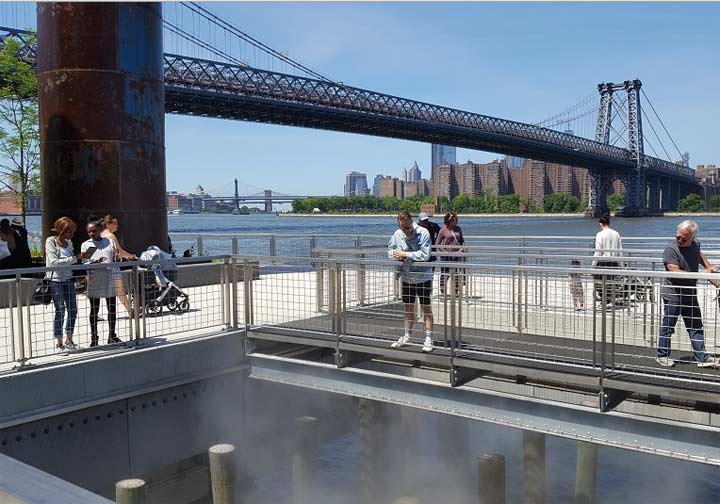 With rising sea levels and storm surges in mind, the park’s designers built its shoreline walkway on a pier elevated nearly 10 feet above water. But a small portion of the walkway provides a glimpse of the old wood pilings and rocky shoreline. A mist generator creates a special effects feel for this instagrammable park. In the background on the Manhattan side are East River Park and its former fireboat station, which I visited earlier this year. 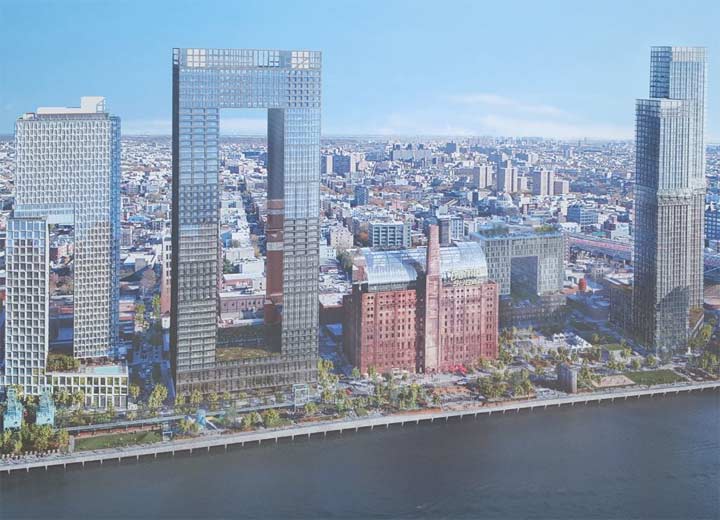 Looking at a rendering on Domino Park’s future, the hottest item in architecture are square donut buildings. I presume the cheapest units are those inside the squares, with views of other windows. In total, 87,000 people applied for its 107 low-income units. As with some of my previous photo essays, old maps are another way of telling the story of a location. 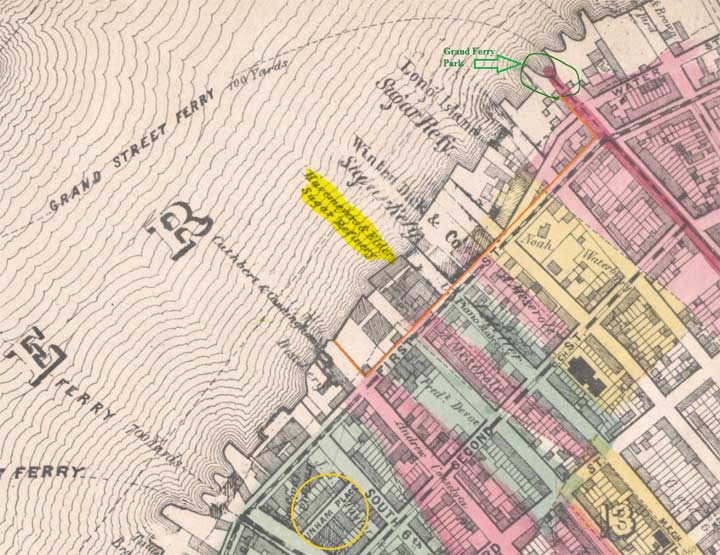 On the 1868 Matthew Dripps map of Williamsburgh (that’s it was spelled in those days), I outlined Domino Park in orange. At the time, the Havemeyer & Elder refinery competed with two other sugar professors next to it. River Street was called Water Street back then and Kent Avenue was the First Street on the Williamsburgh grid. Prior to the arrival of industry, this piece of shoreline belonged to the Meserole family. Descendants of Protestant Walloon settlers, their history here goes back centuries and includes a Meserole Avenue in Greenpoint and a Meserole Street in Bushwick. The Havemeyers who made sugar are remembered with a street in Williamburg located six blocks inland from their factory. Some streets defy the grid with their short lengths. Dunham Place, documented by Kevin in 2008 is circled in yellow. 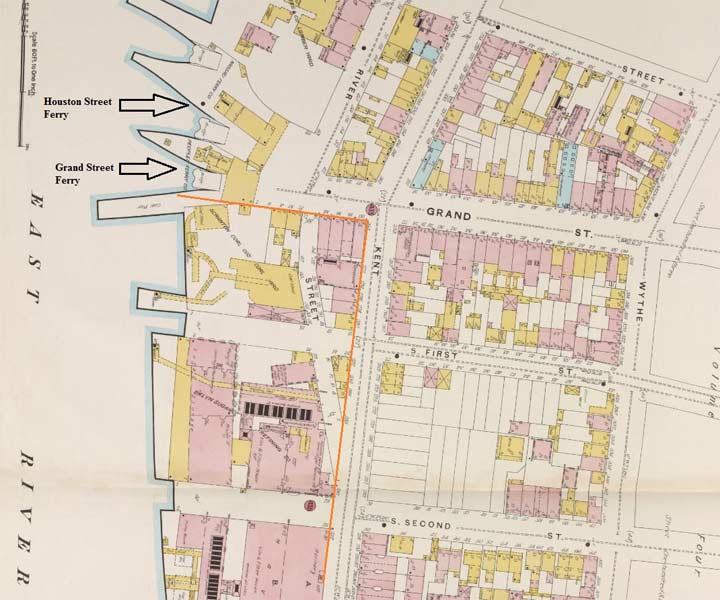 On the 1887 Sanborn map, the sugar refining complex appears in detail, along with the ferry dock at Grand Street. A portion of River Street will later become demapped as the company’s property expanded to its eventual 11-acres. 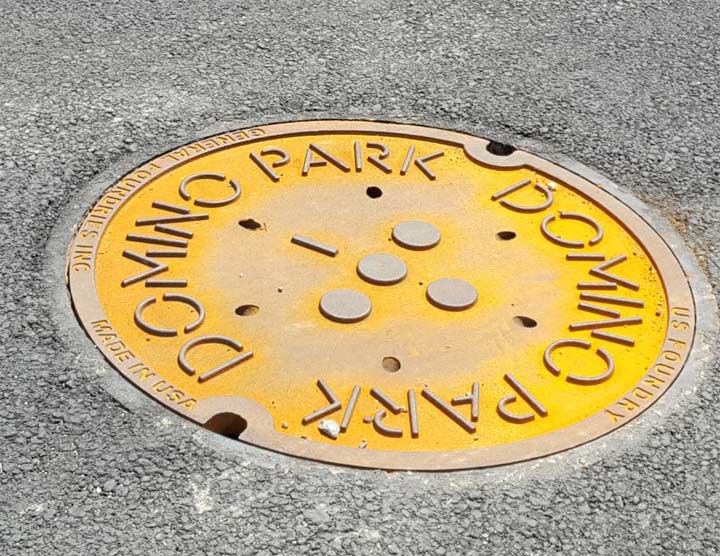 The personal touch of Domino Park appears in its logo that appears throughout the park and its buildings. Even the manholes along the extension of River Street feature the design, created by Noë & Associates. That’s graphic design immortality! Although the sugar served at Danny Meyer’s Tacocina in the park is no longer made in Brooklyn, these privately-funded manholes were made in USA, unlike the city’s metal lids that originate in India. 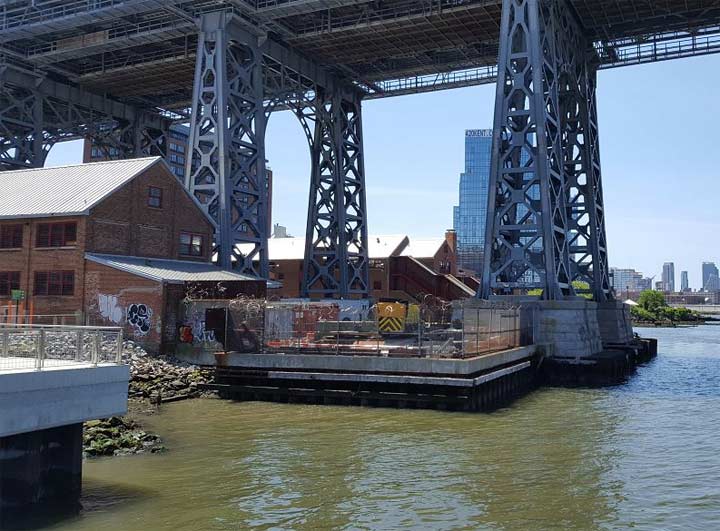 To the immediate south of Domino Park is a DOT maintenance yard, under the body of Williamsburg Bridge. 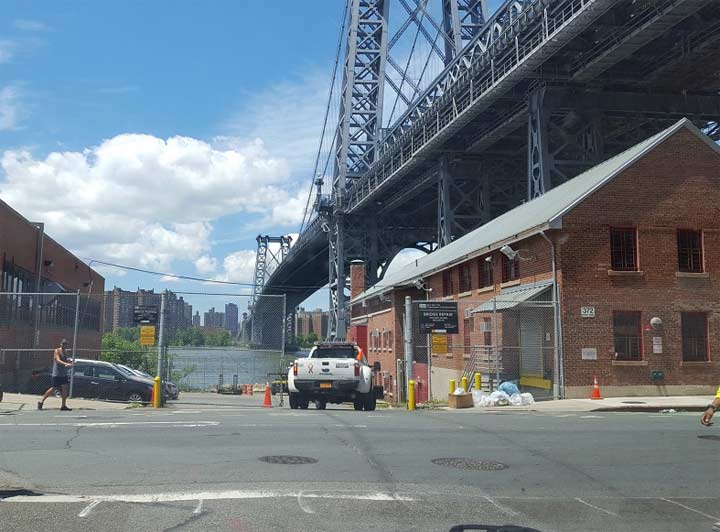 As the city continues to connect its waterfront parks, perhaps in the near future the DOT will set aside space for a walkway along the water’s edge, connecting to Schaefer’s Landing further down the river.

Havemeyer family still around and now living on Long Island.

Worked at domino in security in the 80s . Amazing transformation of that area!

Is this a safe place to take photos at night?