Throughout the city there are hilltops sticking into the skyline and capes pointing into the war that were once fortified. Some still have their forts standing as historical monuments while others preserve the forts in the names of streets, parks, and neighborhoods. In the St. George section of Staten Island, Fort Hill Circle and Fort Place lead to a tiny patch of hilltop greenery that is Fort Hill Park. It is a reminder of a Hessian redoubt that kept Staten Island in British hands for the duration of the Revolutionary War. 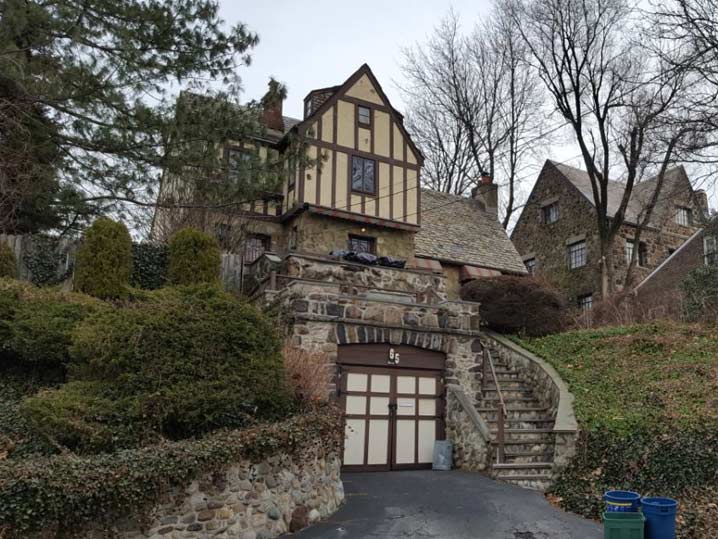 In contrast to Fort Tryon or Fort Greene, the hilltop is not a park. It is covered with mansions encircling the summit in a variety of historical styles. Building atop the steep terrain, many of the homes are accessed by staircases while their garages are carved into tunnels below the homes. In winter the vegetation is this and it is easier to see the mountains of New Jersey and skyscrapers of Manhattan. 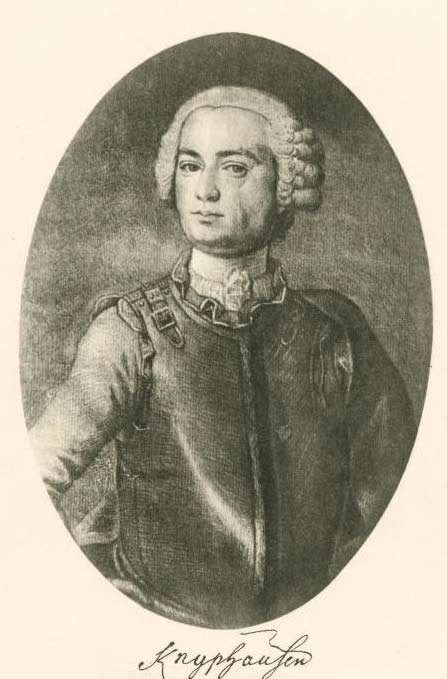 The importance of this fort cannot be overstated. Is story began in 1776 when General William Howe’s fleet landed on Staten Island in preparation for its invasion of New York. They were greeted enthusiastically by the loyalist population here. An earthen fort was built on a hilltop at the northern end of the Dongan Hills range. The base was named after its commanded Wilhelm von Knyphausen who led the pro-British Hessian army in the New York region. In August 1777 soldiers from Fort Knyphausen beat back an American attempt to recapture Staten Island and in January 1780 they beat back another attempt by the patriots. But beyond Staten Island the empire was facing defeat. 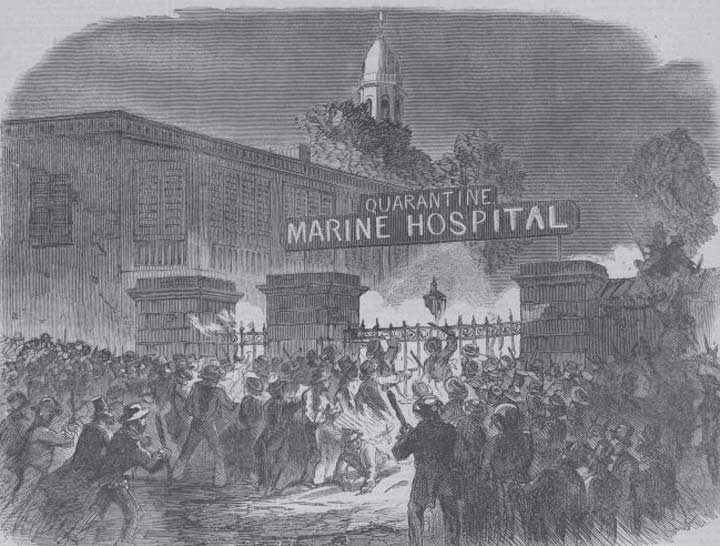 On November 25, 1783 the last Redcoats, Hessians, and their loyalist supporters departed from Staten Island. The lone county in the state that did not send a delegate to the Continental Congress reluctantly became part of the USA, but it is interesting to think how history would have turned out had the British retained this loyal island as an outpost similar to Gibraltar or Hong Kong.

The fort was abandoned, but it was the staging area for one more battle on September 1, 1858 when a crowd of Stapleton residents gathered at the hilltop and then ran down to the shore where they torched the Marine Quarantine Hospital. These NIMBY rebels succeeded in shutting down the hospital, which was later reopened offshore on Swinburne Island. Half of the former fort was used as a reservoir for much of the 19th century. 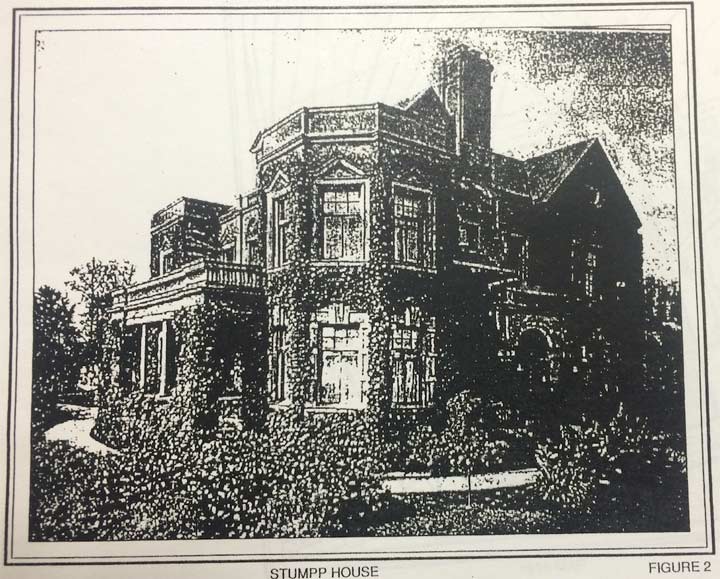 In 1892 the August Stumpp mansion was constructed on the hill’s southern slope. I could not find any information online on its owner and only one photo of the vine-covered home from the Parks property files.

Stumpp Castle was designed by the firm Harding & Gooch with a terracotta exterior on a granite base. It burned down in the 1950s, and the site has been vacant since then. 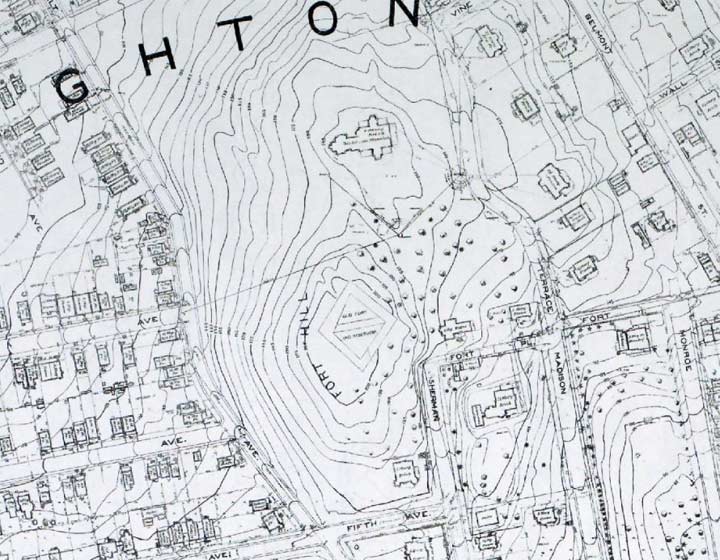 A 1912 topographical survey shows Fort hill’s outline with Stumpp Castle to its south. On its northern side is the Daniel Low mansion, previously the property of Vice President Daniel Tompkins. Low was a prominent neighborhood figure in the 1850s. Daniel Low Terrace on the hill’s eastern side is one of a handful of streets in the city carrying the full name of its namesakes. 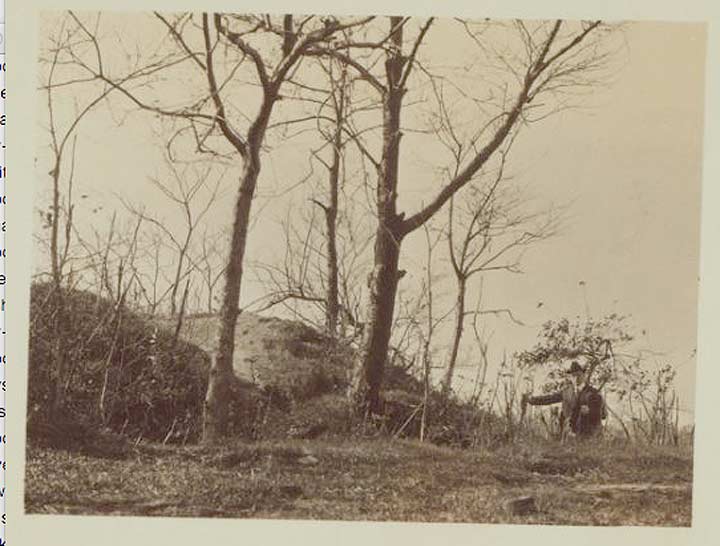 A more prominent Staten Island figure was William T. Davis, historian, naturalist, and authority on all things relating to the island. In 1915 he hiked up Fort Hill, searching for remains of the old fort. In November 1919, the Field Exploration Committee of the New-York Historical Society conducted its own hike on Fort Hill, unearthing a “rubbish pit” filled with hooks, rings, buttons, cooking utensils, bayonets, muskets and bullets. 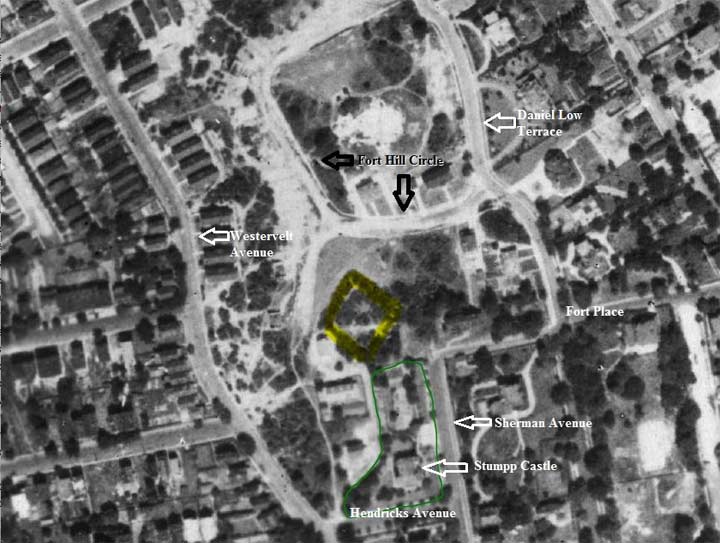 By 1924 the Low mansion was gone but other mansions took their places around the hill with Fort Hill Circle connecting to them. Highlighted are the trees and bushes marking the outline of the old fort. In the green border is the Stumpp property, which will later become a park. On the western side of the property a private access road was built, carrying the name Fort Hill Park. For the streets, avenues, roads, drives, places, crescents, and circles in the city’s address nomenclature, there are also a couple of “parks,” a hill, and a ridge. 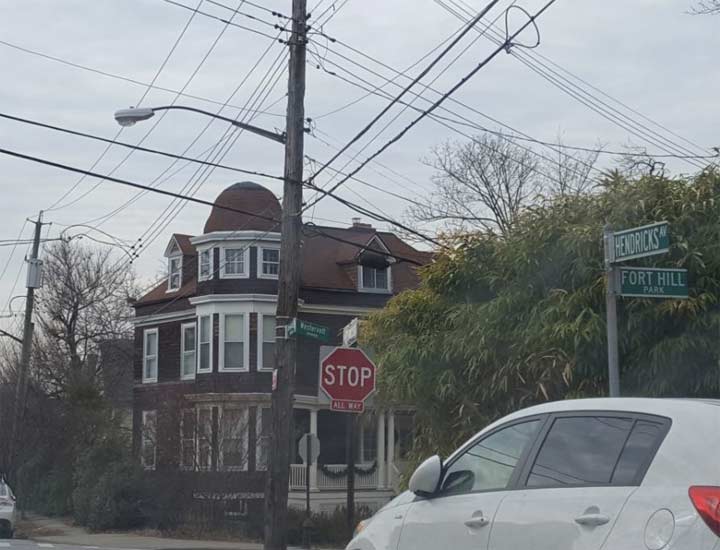 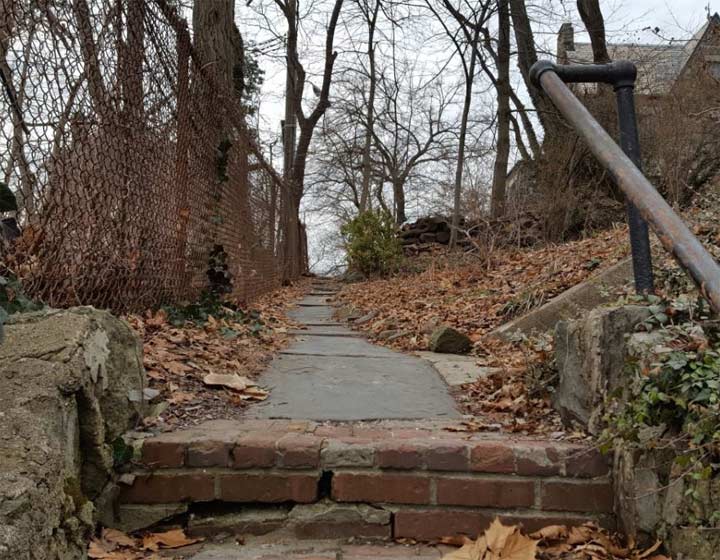 Forgotten-NY has covered the stepped streets of Manhattan, Bronx, and Queens. On Staten Island, one example of such is on the northern border of Fort Hill Park, where Fort Place goes uphill with century-old bluestone paving and one house on the stepped section of this street. 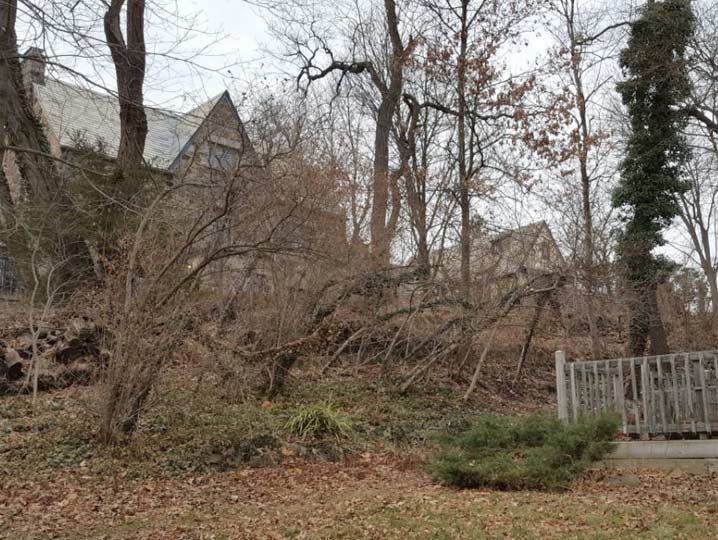 On this pedestrian section of Fort Place one can see an earthen embankment between two homes. The embankment matches the boundaries of the old fort is perhaps the last visible remnant of it. In 1999 developer Brent Lally planned to build homes on the former Stumpp property. The nonprofit Trust for Public Land entered into six years of negotiations with Lally, purchasing the site in 2004 and transferring the .84-acre parcel to the city. 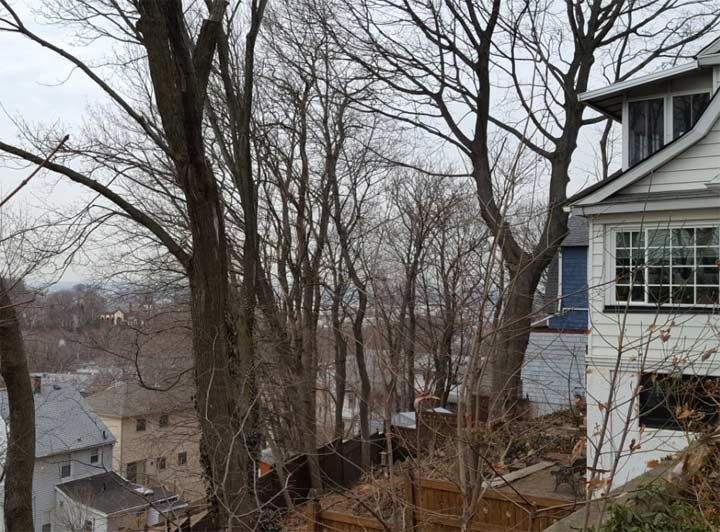 When the Hessians had their fort, all trees on the hill were removed in order to provide good views for the troops. Nature has her way of returning, so the best views these days are in winter when the branches are bare. From Fort Hill Circle looking west, one can see the Watchung Mountains of New Jersey and the nearby red and white St. Stanislaus Kostka church. From the Mahoney Playground behind the church this hill is clearly seen as the neighborhood’s high point.

Although Fort Hill Park has a historically inspired stone retaining wall along its Sherman Avenue and Hendricks Avenue sides, there are no historical markers in this park to describe its history. That’s where Forgotten-NY comes in.

There was a reason behind the burning of the Quarantine Station. Islanders worked there and were getting diseases such as Yellow Fever and spreading it to their families. The State of NY would not act so residents acted. You left that part out. The bodies of the of those that died, mostly Irish and German, were buried where the new County Court House is built.

P.S. The Islanders moved all the sick people out of the building before they burned it.

Also thousands were buried where the Silver Lake Golf course is. Many historians were told that during that terrible event in Ireland called Black 47, Irish immigrants that came here starving and full of disease, had there bodies loaded on to a horse and cart, and taken up Victory Boulevard to there final resting place . In 1929, the local politicians cleared the headstone”s and turned that cemetery into a golf course

Also Father Murphy who was stationed at St Peter’s Church,gave comfort and aid to those coming ashore at that time. Sadly,a short time later he caught the Famine Fever and died.