AWHILE back, Forgotten NY noted some unexpected vehicular tunnels around town on a page that got good response. It got me to thinking about some unexpected traffic bridges around town that are only known about by neighborhood denizens; traditional printed maps never showed them (and in most cases it would have been easy to change the maps to do so). In most cases, these “unexpected” bridges came about due to drastic topography or rivulets and streams that come to the surface, getting awav from the sewers where they usually reside.

Consider this page a starter, as it were, because no doubt there are a few around town I don’t know about. Comments, as always, are open.

Upper Manhattan is occasionally hilly in extreme. One such hill has been known as Coogan’s Bluff in the past, bordering the Harlem River. 155th Street is bridged over the Harlem River by Macomb’s Dam Bridge (a beauty I have featured on numerous occasions). The street itself is bridged over the bluff directly from the Macombs Dam Bridge to Maher Square at Edgecombe avenue at the south end of High Bridge Park on a viaduct that runs high over Frederick Douglass Boulevard (8th Avenue). The department of Transportation has painted it the same pale yellow color sported by the MDB. More photos of this viaduct available on this page. 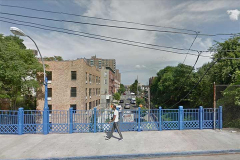 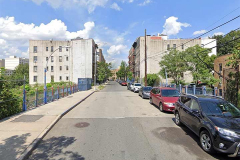 In the southern Bronx, 161st Street presents two faces: the broad boulevard running east from Jerome Avenue at Yankee Stadium east to O’Neill Triangle at Elton Avenue; east of there, it’s just another modest numbered east-west side street. East of Third Avenue, though, the terrain gets quite hilly and rather than have 161st Street climb up a steep hill to meet Eagle Avenue, long-ago traffic engineers decided to keep 161st Street level and bridge Eagle Avenue over it.

When the Eagle Avenue Bridge was built (i’d estimate between 1900-1920) in 1936 designers were free to include stuff like decorative railings and lampposts, which are still in place here, though cobra neck lamp masts replaced the lamps that had been here until the 1960s (I’d love to know what had been there.) Views of (not so picturesque) 161st Street can be seen from the bridge.

While bumbling about the West Farms area a few years ago I was surprised to happen upon this trestle bridge taking East 174th above the Bronx River at Starlight Park. I knew there had to be a bridge, but I was surprised to see all this glorious metalwork.

Blue-painted bridges seem to be a feature in the Bronx, though blue is also used in other boroughs.

Another viaduct is employed to take 241st Street above Bronx Boulevard, the Metro-North commuter railroad and the Bronx River into Yonkers, where it is called Wakefield Avenue, named for the neighborhood just inside the Bronx line. Just north of here, the Bronx-Yonkers line undergoes twists and turns, as it follows the old path of the Bronx River before engineers straightened it several decades ago.

This particular unexpected bridge isn’t a traffic viaduct. Instead, it’s the most picturesque bridge in Midland Beach, Staten Island, where several bridges take roads over New Creek and its tributaries. This particular bridge can be found on Hunter Avenue between Moreland Street and Idlease Place.

Forgotten NY fans will note I get a picture of this gem every time I am in Windsor Terrace in Brooklyn. Here, Prospect Avenue runs through a deep valley and, similar to Eagle Avenue, rather than have Seeley Street descend and ascend a steep hill, long-ago developers chose to bridge it. However, the arch is rather low, at 9’7″ and I’m not sure all trucks can get under it.

When Riverside Drive and Park were laid out in the early 20th Century, rather than have them intersect with several busy streets, traffic engineers bridged them and some of these unexpected bridges are handsome indeed. West 96th Street is a symphony of wrought iron and stonework.

Compare West 96th to West 138th, which was once magnificent but has been permitted to deteriorate. It does feature a pedestrian staircase.

Over the years I’ve become familiar with the West 155th Street Riverside Drive viaduct; out of the photo on the left is the main entrance to Uptown Trinity Cemetery, as its own designers failed to place the entrance on Broadway, the most logical spot. Just inside the entrance, if you know where to look, is the gravesite of Clement Clark Moore, the composer of “A Visit From St. Nicholas.”

This is something of a Bridge to Nowhere, since at the other end is a somewhat rickety pedestrian bridge spanning railroad tracks.

This is the highest and plainest of the Riverside Drive viaducts on this page, though the highest is the lengthy one that takes the Drive high above 12th Avenue from West 125th to West 138th Streets. This one, though, is tall enough to fit a garage under it.

No doubt I have forgotten a few of these. Comments are open.

The Eagle Avenue bridge opened in 1936, per the plaque on the upper level.

I don’t know if the tiny bridge(s) in Lighthouse Park on Roosevelt Island still exist, but they were nice to walk over, and unexpected.

I believe that the reason Trinity Cemetery’s designers did not place the entrance on Broadway is that in 1842 most people would arrive at the cemetery by boat. Broadway was unpaved (or paved with cobblestones), there were no cable cars or other mass transit (the first horse-drawn streetcars weren’t introduced until 1832). Trinity Cemetery was out in the country to avoid contamination of local groundwater, and traveling overland from “the City” was a long and uncomfortable ride in a horse and carriage. There would have been no reason in 1842 to place the main entrance on Broadway.

The Hunter Ave. bridge looks like its made of wood

The view of the Hunter Avenue bridge from the other end has a “road narrows”-type sign that I don’t think I’ve seen before anywhere else: Hunter Avenue road narrows sign. Interestingly, perhaps, it’s on the side of the bridge where the road isn’t narrowing or expanding. Maybe it did on that side of the creek at some point in time in the past?

Correcting myself…it’s not a “road narrows” sign, it’s a “narrow bridge” sign. Earlier views on Google Maps Street View show a previous version stating “ROAD NARROWS” in words that has been replaced by the pictogram version today (or December 2021 when the Google car captured the latest image).

Oh, for goodness sake! “NARROW BRIDGE” in text, not “ROAD NARROWS”. Gotta stop doing this stuff at 2AM.

Got lost on Midland Beach’s back streets a few years ago and ended up driving over that Hunter Ave bridge. Man, that rickety wooden structure did not inspire confidence. My favorite bridge on SI is the very tiny bridge that carries Richmond Hill Road over a small creek near Arthur Kill Road in Richmondtown. It’s about 10 feet long and was built in the 1840s, and has to be one of the oldest (if not THE oldest) bridges in NYC carrying automobile traffic.

Is this the one you’re referring to: Town Bridge on Richmond Hill Road? It appears that the sign has disappeared since a Google Street View car captured that image.

That’s the one! Not many pre-1845 bridges left in NYC, small or otherwise.

I cannot find the Seeley St bridge on Google Maps. A modern, boring I-beam bridge is at the intersection with Prospect Ave.