The map of Staten Island is filled with former “company towns” such as Linoleumville, Kreischerville, Port Mobil, and Port Ivory. Then there’s Graniteville, which was built around rock quarries. Fred Flintstone would feel right at home over here. It is the only place on Staten Island where one can stand on the same rocks that form the Palisades cliffs further north along the Hudson River. 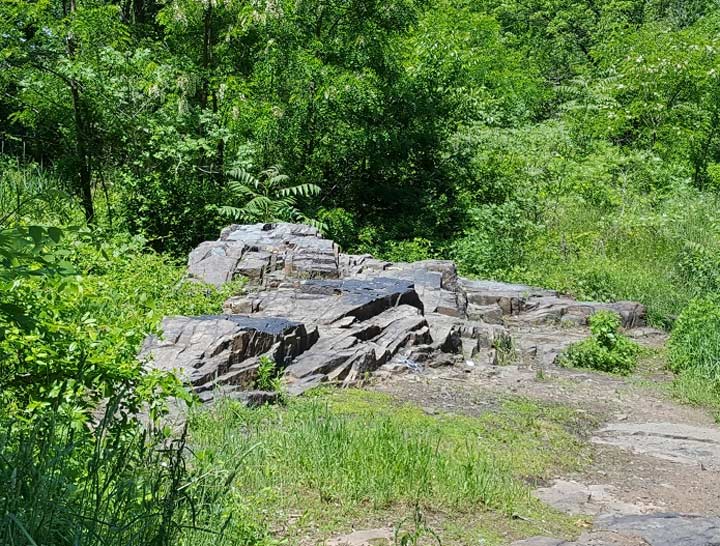 The park that recalls the neighborhood’s past is the 4.46-acre Graniteville Quarry Park, an undeveloped green space carved out of a hilltop. Like Travis, formerly known as Linoleumville, Deckertown, and Long Neck, this neighborhood also had other previous names. Before its rocks were drilled and blasted apart, Graniteville was known as Bennett’s Corners and Fayetteville. The quarry operated between the 1840s and 1896. Although the locals took it for granite, the rock formation in this former quarry is a diabase sill dating back 200 million years when the supercontinent of Pangaea split up. 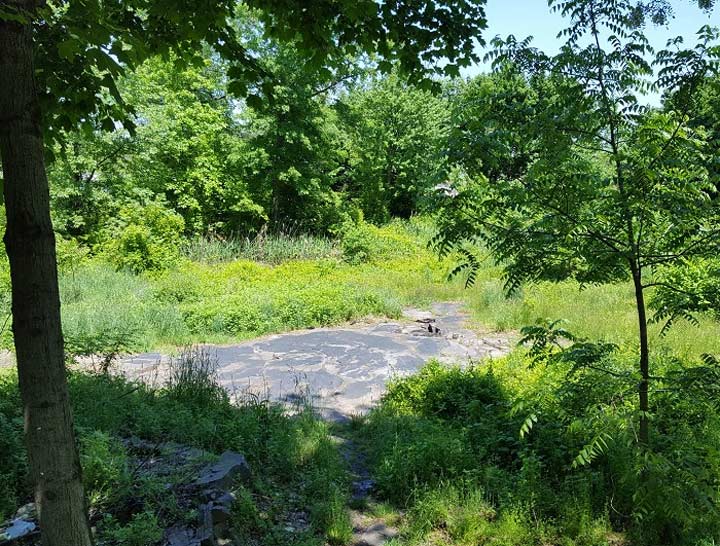 Known as the Palisades formation, its northernmost appearance is in Haverstraw from where it follows the west bank of the Hudson River to Hoboken and Jersey City. South of there, it dips closer to sea level while forming the Bayonne peninsula. 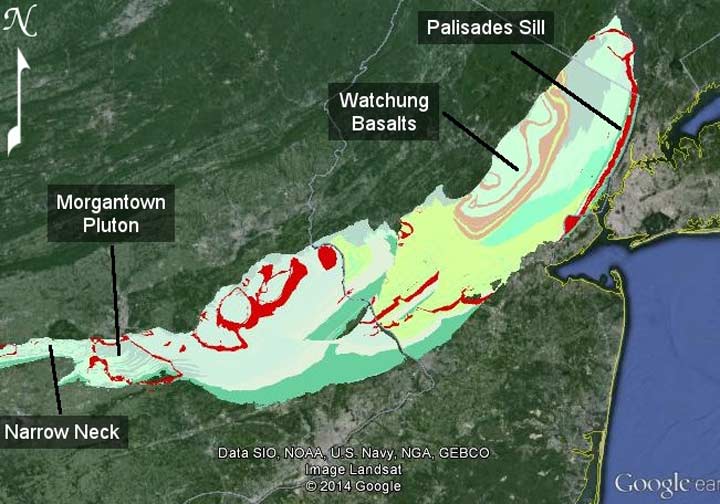 It forms a gentle ridge on Staten Island between Port Richmond and Travis. Covered by vegetation and layers of soil, the only place where the diabase pops above the surface is in Graniteville. It is also known as trap rock, from the Swedish word for stairs (trappa) as the rock cleaves in angles resembling a staircase. 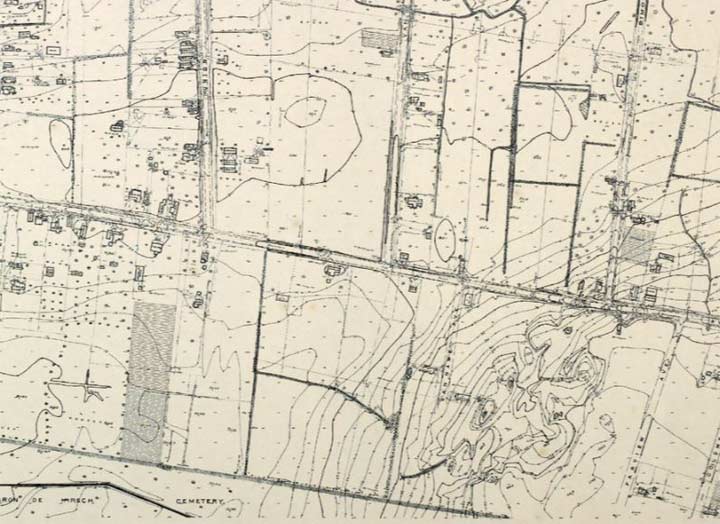 The former quarry was acquired by Parks in 1999 with plans for educational signage and trails. As a 1907 topographical map shows, the land rises in Graniteville with the hilltop carved out by industry. On the south side of the park Willcox Street rises and descends along the covered diabase ridge. 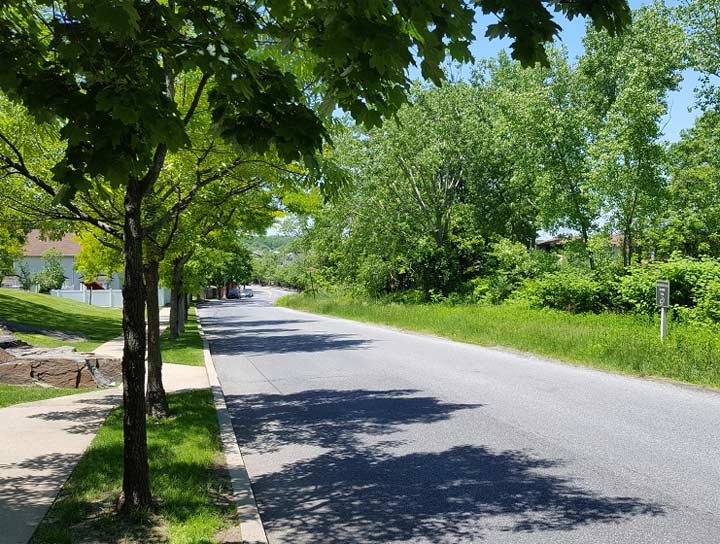 The sidewalk on Willcox Street curiously bends around the ancient rock. Here travelers can truly say that they’re standing atop the Palisades… on Staten Island.

The leading advocates for the park’s creation were the Mariners Harbor Civic Association and College of Staten Island geology professor Alan Benimoff, who identified the diabase here as trondhjemite, a very rare type of igneous rock. 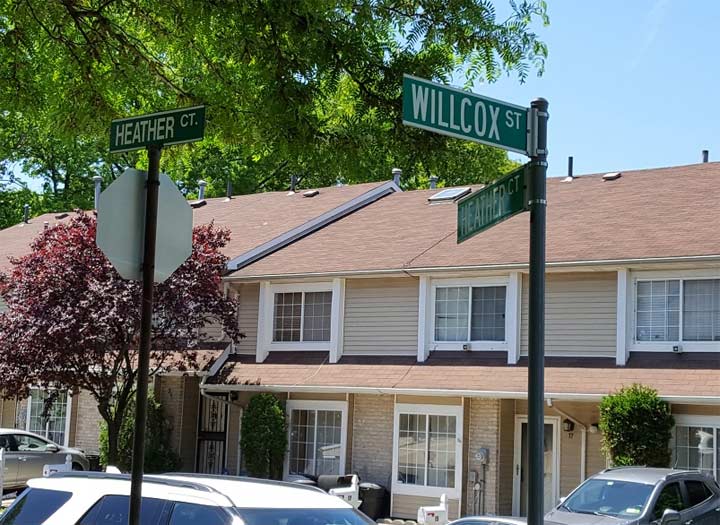 Along the south side of Willcox Street across from the undeveloped park are a set of privately-owned dead-end streets. Unofficial signage has the colors of the DOT, but not the font. At Heather Court, there is an official and a private sign next to each other for comparison.  Names such as Heather, Claudia, Adrianne, Eleanor, and Doreen appear either picked out of a baby naming book, or perhaps of some value to the developer who built these streets and homes. Among the boroughs, Staten Island has the largest number of private streets, some open to the public and others defended by gates. Their names fascinate me, even though most of them are typical English names. 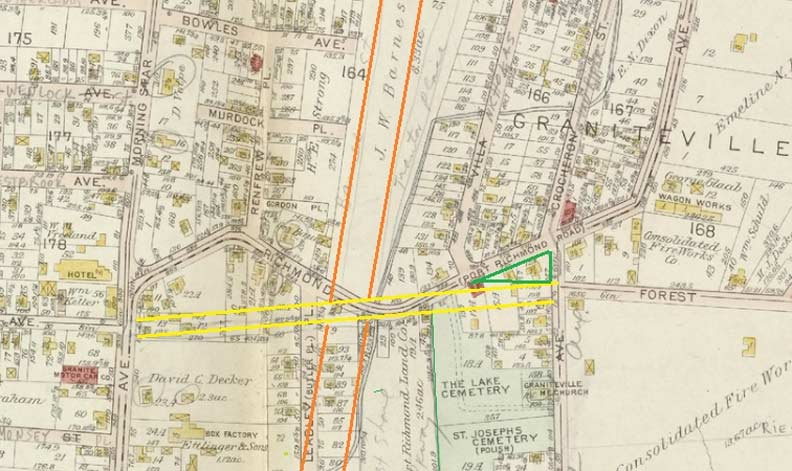 The historic center of Graniteville is the intersection of Richmond Avenue, Morningstar Road and Forest Avenue. As the 1917 G. W. Bromley atlas shows, Richmond Avenue takes a curve to the east and upon resuming its northward run, becomes Port Richmond Avenue. Kevin Walsh was here in 2009 to tell the story of this geographic curiosity, the two nearby pocket cemeteries, and Egbert Triangle (marked in green). 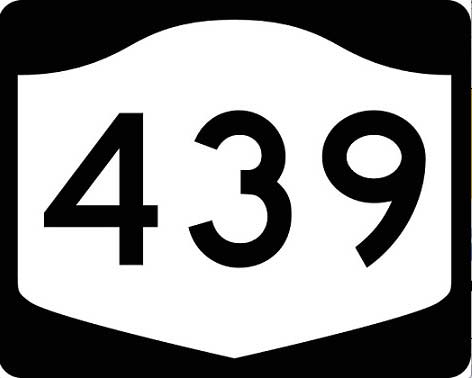 On this map, in orange I outlined the eventual part of MLK (Willowbrook) Expressway which would open in 1965. In yellow is the path of Forest Avenue, which would straighten the curve on Richmond Avenue. Once a major east-west route, Forest Avenue connects Goethals Bridge to the ferry terminal at St. George. Between 1949 and 1968, it was numbered as New York State Route 439. The construction of Staten Island Expressway sucked away through traffic from Forest Avenue, resulting in the retirement of NYS Route 439. The underpass of this highway at Walker Street also offers a peek at the diabase rock. 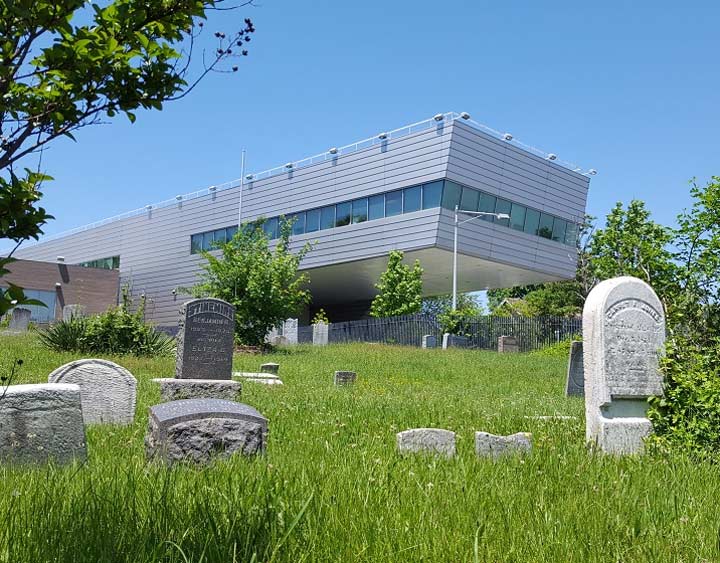 A few yards to the south of Forest Avenue is the 121st Precinct, designed by Rafael Vinoly and completed in 2013. This post-modern structure was described by blogger Matt Green as a “giant stapler,” and by the architect as “a symbolic gesture of community engagement that defines the main entrance and creates a visual link between the main lobby and the street.” To me it looks like the gaping mouth of a snake. As the borough’s newest precinct in nearly a half century, it makes for a great conversation piece and a unique workplace. From above, it appears to be the longest building on Staten Island. The precinct’s open mouth overlooks Hillside Cemetery, a historic burial ground dating to 1828. 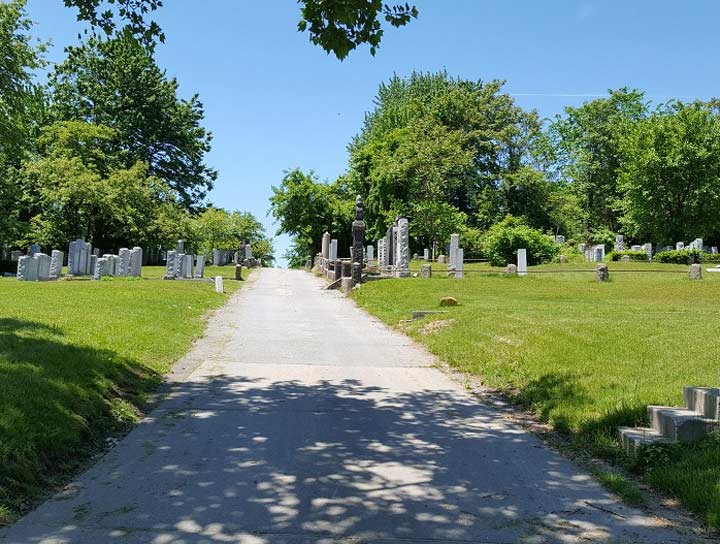 To its immediate south is the much larger 80-acre Baron Hirsch Cemetery, which lies on the worn down ridge formed by the diabase. Founded in 1899, it is named after prominent Bavarian Jewish philanthropist Maurice de Hirsch. Lacking grandchildren, he described humanity as his heir, spreading his generosity to projects far and wide. As his title suggests, he was one of very few Jews granted a title of nobility under the German monarchy. Among those buries here is theater producer Joseph Papp. Stop by his grave and recite him a sonnet. Also, pay your respects here to former mayor Abe Beame. 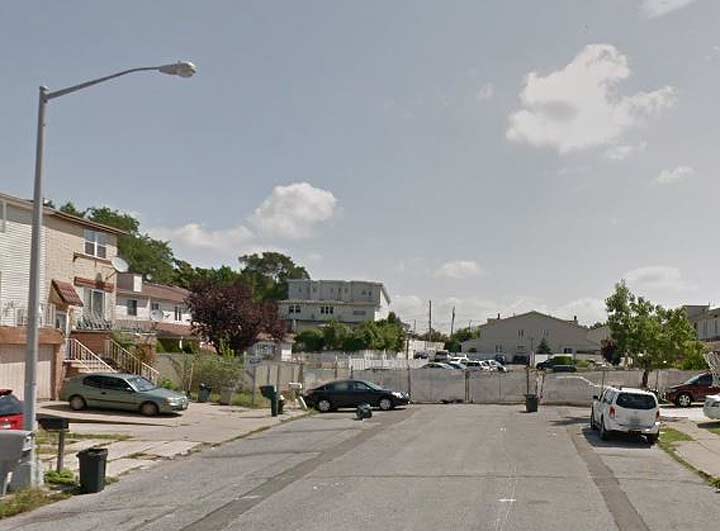 On the 1917 map, lands to the east and south of the cemetery were occupied by fireworks companies. These days the land is parceled out for tract housing. Making the drive here confusing are streets like Ada Drive and Regis Drive, which are public on one block, and then are interrupted by a fence midblock where they become private streets. 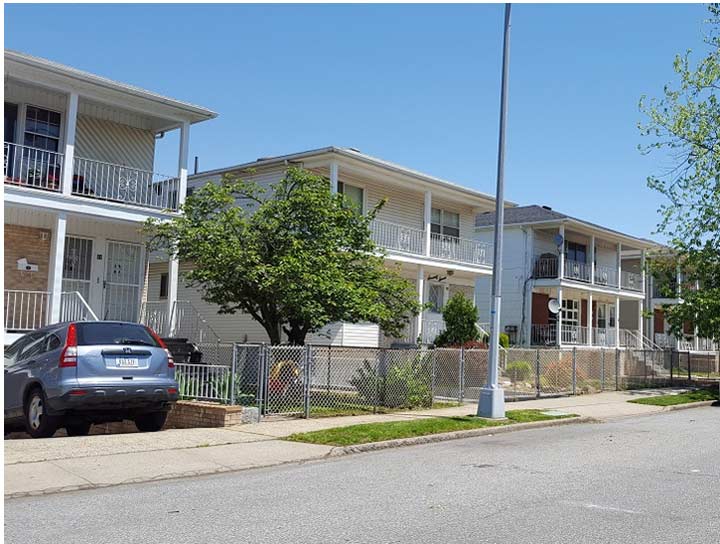 Another Graniteville thing are houses with balconies that have a very southern appearance. Staten Island’s best example of antebellum style is the Seguine Mansion on the South Shore. 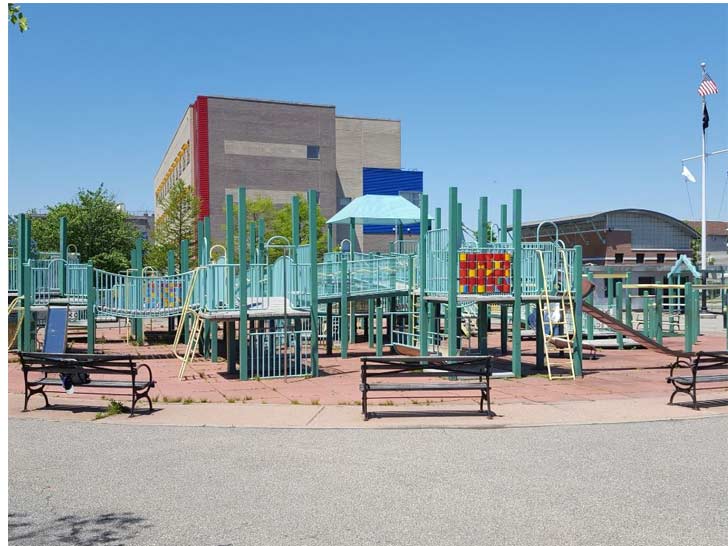 I finished my visit to Graniteville with one of its more recent parks, the 1.6-acre Jennifer’s Playground. Acquired by Parks in 1971, it was developed in 1997 in memory of local resident Jennifer Schweiger. Its namesake was a student at P.S. 22, born with Down’s syndrome and beloved by her community. The abduction and murder of this 12-year-old was a national story and led to the conviction of a serial child killer. The long record of unsolved child disappearances lent themselves to an urban legend. As Schweiger was disabled, the playground was designed to accommodate children of different abilities, which explains for the multiple ramps on its play structure. 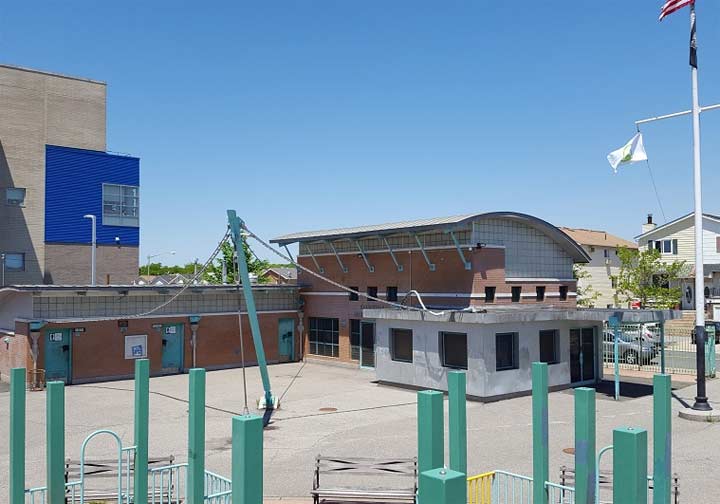 The recreation center at Jennifer’s Playground is used by a summer camp, but I am curious about the tentacle-like cables attached to this building. 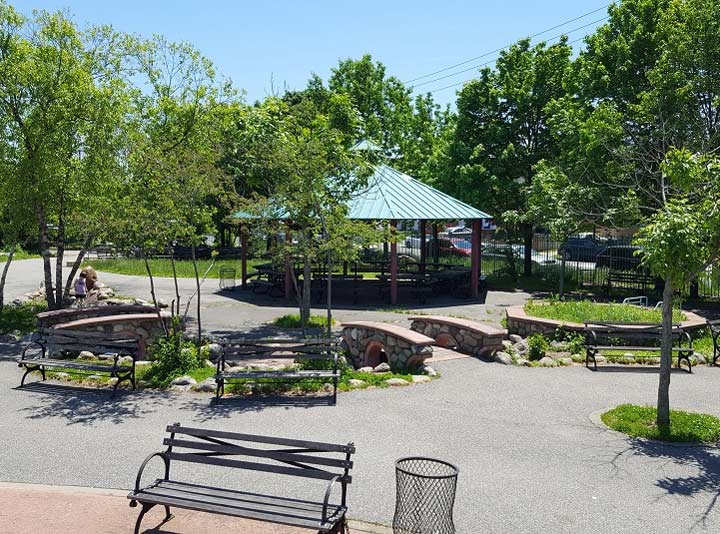 Along with the summer camp, play structure, and lawn, this park also has a gazebo for that traditional look and a constructed brook, as if this borough does not have enough hidden waterways. Prior to its renaming after Schweiger, this playground was known as Graniteville Park. On my drive out of the neighborhood, I noticed the visual contrast on South Avenue with wetlands and forest on one side and tract housing on another. I initially presumed that the undeveloped side was parkland, but that’s only 9 acres of the 31-acre superblock, as indicated on the OASIS NYC property map. 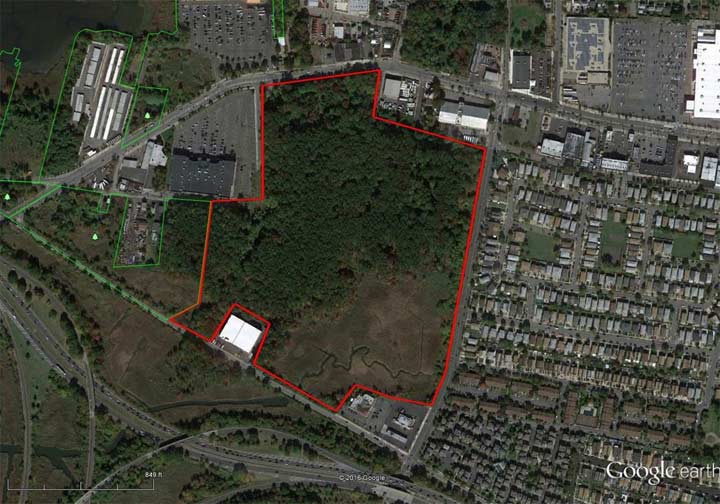 An aerial survey reveals the extent of the undeveloped swamp. To its north is the Mariner’s Harbor neighborhood, with Old Place to its west and south. Kevin Walsh explored the edges of this swamp back in 2007. In the northeast corner of this superblock, there are plans to build a BJ’s Wholesale Club on a 28-acre parcel. A restrictive covenant ensures that 10 of these acres would remain wild, but advocacy groups such as Staten Island Coalition for Wetlands and Forest, and the local Community Board remain opposed to the big-box store. Nevertheless, the project was approved by the Borough President and the City Planning commission in 2017.

The future of Graniteville Swamp is murky, but the rest of the neighborhood’s history appears safe from further development.

“Took it for granite.” Beautiful.

If those 2,000 mature trees are sacrificed for new BJ’s on South Avenue, neighborhood will be underwater next Sandy or even a big flash flood. Parking lot at movie theatre floods, as it is.

The tentacle like wire and support system connected to the recreation building in Jennifer’s Playground were used to support a stretched canvas shade structure when it was first designed and built. The building’s leaders are in the shape of squid.
The City approved the 18 acre “development” of the Graniteville Wetland and Forest. But all is not lost. We, Coalition of Wetlands and Forests, are now taking it to New York State Department of Environmental Conservation who has final jurisdiction.