In the section of Manhattan dubbed Two Bridges on some maps but known to local residents as part of the Lower East Side is a 22-acre superblock of public houses that replaced an old set of tenements and streets. Often when the city engaged in “slum clearance” to build such “towers in the park,” it retained structures within the footprint that it found useful. In the case of Alfred E. Smith Houses, hundreds of buildings were wiped from the map except for one:

Dating back to 1907, the former school appears worthy of landmark status but if it had this designation, would it be worthy of Forgotten-NY? These days the facility serves as a homeless family shelter surrounded by the dozen low-income high-rise towers named after the neighborhood boy who became governor and the first Roman Catholic to run for president.

With NYC Lamppost King Robert Mulero in mind, a closeup of the archival photo from 1907 shows us the standard street furniture of that time: a gaslight and square street name plate wrapped around the lamppost. Kevin told the story of the city’s last gaslights in 1998. No square street signs remain anywhere in the city. Am I wrong? Comment below if you find one.

I would like to direct Robert to the recently installed lampposts populating this NYCHA campus. They have the appearance of a headless figure holding up a domed hat. Underneath the cap are energy-saving LED lights that point down to reduce light pollution.

Prior to urban renewal this section of the Lower East Side contained ancient streets that now reside in the memory of roads long gone: Vandewater, Hague, Batavia, Chestnut, and New Chambers Street. The story of this former school takes us back to 1860 when the city opened Primary School No. 14 on Oliver Street to serve the city’s Fourth Ward. As the nearby Five Points slum was built atop the landfill that covered Collect Pond, this ward was also a slum built atop marshland that used to be Old Kill. This forgotten waterway followed James Street towards the East River. On the prewar Hagstrom map above, the red lines indicate the Alfred E. Smith superblock with P.S. 114 inside it.

The design of this school is similar to that of Grammar School No. 55, which opened five years later on the site of Chelsea Green Park. At the turn of the 20th century the school was no longer able to handle the crowds. Superintendent Snyder commissioned a new school here, bound on three sides by Oliver, Oak, and James streets. This new P. S. 114 was addressed as 43 Oak Street. Philosopher Morton White called his alma mater “one of the toughest,”  so bad that his parents paid an older schoolmate to protect him- at age 7. Actor Jimmy Durante was bullied for his big nose here. After school, Durante worked as a newsboy at the nearby Newspaper Row.

This section of the Lower East Side had a sizable Italian population. As Little Italy has the San Gennaro feast, and Williamsburg has the Feast of Mount Carmel, the huge Roman Catholic event on Oak and James Streets honored San Rocco, or Saint Roch the 14th century confessor popular in northern Italy. City photographer Percy Loomis Sperr captured this event in 1929. Nearby New Chambers Street hosted the Feast of Saint Vincent, as depicted by the prolific Berenice Abbott in 1935. 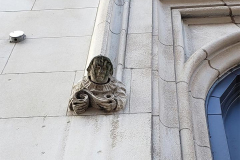 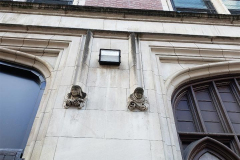 The architecture of this school is reminiscent of my alma mater CCNY with a faculty of architectural figures on its walls. As gargoyles represent animals, grotesques are caricatured humans of architecture.

Change came for this neighborhood in 1944, the year when Smith died. The city had ambitious plans to raze hundreds of tenements and replace them with public housing. Block by block the buildings were gone, leaving two survivors: the old Fourth Precinct at 9 Oak Street and P.S. 114. The precinct and the elevated tracks watched over the disappearing neighborhood. Also lost in this slum clearance, the Society of San Giuseppe at 64 Oak Street, and the old Mariner’s Church. And then the precinct was demolished, leaving only the school.

In the following decade, the neighborhood lost its proximity to the subway with the razing of the Third Avenue El below Chatham Square in 1950, and with the rest of its Manhattan section closing in 1955. There is a short subway tunnel built in the 1970s near Chatham Square for the Second Avenue Subway, but it likely won’t see train service for another century.

In the 1951 image from the Municipal Archives, we see P.S. 114 as the lone remnant of a neighborhood that preceded the public housing towers. In this aerial photo we also see P.S. 1 behind the superblock, also a beaux arts design. James Slip is seen running through the superblock but it will soon be erased in favor of a parking lot. Within two years, all of the public housing towers would be completed.

In 1947 the elementary school became the Metropolitan Vocational High School, which trained young musicians and actors including Eartha Kitt. Photographer William P. Gottlieb documented this school in a collection that’s now found at the Library of Congress. The school later relocated to Midtown and then the Upper West Side as LaGuardia High School, from where I graduated.

In 1966 architect Percival Goodman designed the modernist successor to P.S. 114, the Jacob Riis P.S. 126 and the neighboring recreation center. Goodman is best known for designing palatial suburban synagogues with more than 50 in his portfolio as the “most prolific architect in Jewish history.”

In 1970 the rec center received a sweeping 55’ by 26’ mural painted by neighborhood youths. The same way that a rap song openly brings up society’s vices, this artwork depicts policemen taking bribes, drug‐taking and beatings. The imagery here is reminiscent of artist Joan Miro’s biomorphic shapes.

Relying on the NYPL Map Warper, we blend today’s superblock with the 1911 G. W Bromley atlas plate. As much as Robert moses liked Corbusian superblocks, he also liked to accommodate cars should the need arise to restore the old streets here.

At Alfred E. Smith houses, there is enough space between the 12 towers to provide visual corridors of the ghost streets that used to run here. The sections of Oak, James, and Water Streets that ring around the old school was renamed as part of Catherine Slip, while the addresses on it are listed as Catherine Street.

The monument honoring Alfred E. Smith served as a backdrop to a Forgotten-NY tour in April 2019, and Kevin has been here before in January 2019, on Pearl Street behind Police Plaza in 2016, and on James Street in 2014. Catherine Street was named after a member of the colonial Rutgers family that owned land here through 1865. See my earlier essay on what remains of their once-sizable estate.

The old P.S. 114 became a homeless family shelter in 1985, and it went through a rough three decades of suicides, gang activities, and overall neglect that betrayed its beaux arts appearance. I was surprised that the 2009 archeological survey by the Lower Manhattan Development Corporation and the AIA Guide mentioned P.S. 126, but not the older former P.S. 114. The entrance is unmarked, no flags or signs. A couple of DHS vans hint at its current purpose. The interior of this Snyder-period school is truly forgotten, known only to homeless outreach workers, their clients, and security guards.

THEY BURIED CHRISTMAS AT GREEN-WOOD

I could never understand why when building public housing so many blocks and the streets they were on had to be eliminated when it could have been done while leaving the street grid intact.

So the “rec center” has a 1970 mural: leave it to the legacy of Lindsay to remind us that NYC has reached this nadir again. Here’s something else for you to “celebrate”:

Oh please, NYC has hardly reached its nadir. The population and real estate values are both at record highs, and we’re still by far the safest major city in the country.

The purpose of FNY is to celebrate the city. Go spread fear somewhere else.

Really?! Here’s another inconvenient truth for you:

Please stop with your incessant comments. You like red state politics? Great, enjoy your new home and we’ll continue to enjoy ours here in NY. Now leave us alone.

You probably don’t read the NY Post or watch Fox News Channel, or listen to talk radio. Too bad.

Hi Sergey,
Thanks for (yet another) fantastic piece of Manhattan scholarship. I always learn new (to me) remarkable things about the way things used to be.

I grew up in the building directly across the street from this school. I always thought it was a junior high school before becoming a shelter. Thank you for the history lesson.

Actually it was, the JHS 65 Annex it was called. Not sure how long 65 was in that building before it was converted into the shelter. I’m an Alumni, and I lived right across the street as well

In 1954 I was born in, the then Gouverneur Hospital, and lived in an apartment on 93 Monroe Street until we moved to the Williamsburg section of Brooklyn. My mother ran a Porto Restaurant on the corner of Eldridge and Cherry. I have been searching for old photos of these buildings online and have discovered that everything has changed dramatically and destroyed. Is there any way to find photos of my mother’s restaurant from the late 1950’s, early 1960’s and the apartment building on 93 Monroe Street? I live in Florida now and would love to find some remnants of this childhood memory and history.

I was an electrician for the NYC Human Resourses Administration during the explosion of the homeless population of the early 1980’s. It seemed like every couple of weeks the Department was acquiring an abandoned school or a NY State Armory for use as a shelter. Our job was to install lighted exit signs, emergency lights, and smoke detectors so that the shelter would meet the minimum life safety standards. It got to be routine except for the time we were forced to work on Xmas Eve and Xmas Day for a rush shelter opening. And as we moved into an Armory in Harlem, the NYPD had to be called to evict tennis players who paid touse of the drill floor.
But Catherine Street was different. We knew there was a major problem when the management team plugged their very fancy expensive satellite phone into an outlet and it became a smoke generator. Almost the entire building was wired with Direct
Current! At the time of the school’s construction the whole area would have been in one of New York Edison’s Direct Current
Districts. An Alternating Current service had been brought into the building sometime in the 1960’s to supply fluorescent lighting
in the classrooms( standard fluorescent lights won’t work on Direct Current). Con Edison supplied a large rectifier unit to change the Alternating Current to Direct Current for the use of the existing DC equipment and outlets throughout the building.